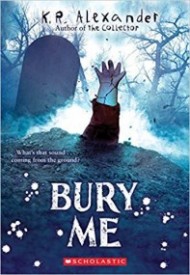 No one ever leaves Copper Hollow. It's a town with a deadly history. . . but nobody ever talks about it. Kimberly thinks there might be something strange going on. She's not sure what - - - until a menacing doll appears with two words written across its clothes: BURY ME. Kimberly and her friends try to destroy the doll. . . but every time they think it's gone, it comes back again. Is there any way to rid themselves of the evil once and for all?
Tweet

Overall rating
4.7
Plot
5.0  (1)
Characters
5.0  (1)
Writing Style
4.0  (1)
Already have an account? Log in now or Create an account
What Horror YA Books Should Be
December 03, 2019
Overall rating
4.7
Plot
5.0
Characters
5.0
Writing Style
4.0
In horror books and movies, we often see dolls as the main source of scares( such as Annabelle or Child's Play). In K.R. Alexander's Bury Me we get another scary doll to add to the list with some pretty good spine chilling moments, too.

We start with Kimberly Rice, who is a kid with a vivid imagination that can imagine up anything her heart desires, but because of this, people don't believe her when strange things begin to happen in Copper Hollow. She has two friends named Alicia and James- - -but Kimberly feels like she doesn't fit in with them because they live in houses while she lives in a trailer. "I wait for them to say, Hey, Kimberly, do you want to come over for dinner? They don't. They never have. It hurt my feelings at first, but I got over it fast. They're still my best and only friends, so I can't really complain when they don't have me over to their houses. It's not like I can really invite them over to mine. " Kimberly explains.

Although she states that they are her best friends, there is another part that may suggest otherwise. At first, we read about Kimberly being ashamed of her home although she states she has never tried to invite her friends over - - - as far as we know - - - but during a scene where Kimberly goes over to Alicia's home for help with this doll, Alicia doesn't invite her inside, which Kimberly points out.

But Kimberly's dysfunctional friendships aren't what the story is about. The book is about a doll that suddenly shows up with the words 'bury me' written across its dress in black ink. The perfect setting for a horror story. Kimberly teams up with her friends, Alicia and James, to figure out what this doll wants.

Alicia convinces Kimberly to do what the doll's dress says: 'bury me.' But even after they do this, the doll somehow shows up again, without having disturbed its burial place. They finally begin to question whether or not the doll is possessed by an evil spirit because the doll's mouth moves on its own, making frowns and even seeming to silently scream at one point, and no matter what they do, the doll always comes back completely intact. Yet, the only one the doll seems to be 'haunting' is Kimberly, although James and Alicia participate in trying to get rid of it. Kimberly is also haunted by dreams that aren't exactly her own, but she doesn't reveal these to her friends- - - which doing so may have helped in the long run. As a result, the friends never really figure out how to get rid of the doll, it seems that only Kimberly's dreams can figure this out (it just takes her nearly the entire book to figure it out).

The horror elements in this story are pretty good, but as the book recommended age states, it's for pre-teens. Yet, Alexander did a better job on this than 'The Collector' when it came to those elements. I honestly really enjoyed this book, even as an adult.

We continue with Alicia and James beginning to question Kimberly, thinking that this is just a prank she has come up with because their town is boring: " 'Did you do this?' Alicia asks, looking straight at me. Once more, my heart throbs- - -but this time, with a note of anger.
'Why would I do something like this?' I ask.
'Because Copper Hollow is boring and you're trying to make it fun with another one of your wild stories?' She doesn't sound accusatory; she sounds like she's running out of options that make sense, and she doesn't like that at all. "

Kimberly also has to deal with a history book on Copper Hollow that only shows blank pages to her, even when she shows it to adults, they seem to go into a daze as if the book doesn't even exist to them. Even when she asks the Mayor about this very book, he has no idea what she's speaking of. " I try to change the subject. 'I finished that book. The one about our history.'
'Book? ' Mayor Couch asks. 'What book?'
'The one I showed you.'
He chuckles. 'You and your imagination. I don't remember you showing me a book. ' "
Readers and Kimberly still have no idea what is going half way through the book. "Something weird is going on with him. It makes me wonder. . . is it linked to the doll? Or maybe he just has some sort of memory loss? "

While Kimberly is going through all of this, her mother seems like a wasted character to introduce. She, who is rarely home and works double shifts throughout the entire book, is never there for Kimberly, but also,Kimberly never goes to her mother for help.

The story starts quickly, getting right into the doll appearing, and by the end, we learn something that was not predictable - - -this is good writing. Bury Me is what YA horror books should be: suspense, unpredictable moments and likable characters. And compared to Alexander's first book, The Collector, his story telling is getting better to the point that I am looking forward to reading his other recent books, but hopefully he sticks to telling stories with children and not adults.

I highly recommend this book to fans of R.L. Stine's 'Goosebumps,' because I truly believe we have our next R.L. Stine. Great story, great writing.
Good Points
Great scares
Good paranormal elements
Unpredictable

Hadley Top 1000 Reviewer 2 reviews
Report this review Comments (0) | Was this review helpful to you? 0 0
Powered by JReviews
How to resolve AdBlock issue?
X

Bethany Wicker, Listings Manager & Staff Reviewer
"Clark Kent is trying to be an ordinary thirteen-year-old boy but he has a very extraordinary pastime. He loves saving..."