The Evil Queen (The Forest of Good and Evil, #1) 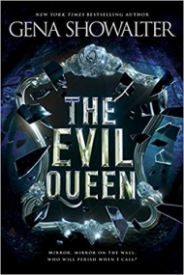 Far, far away, in the realm of Enchantia, creatures of legend still exist, magic is the norm and fairy tales are real. Except, fairy tales aren’t based on myths and legends of the past—they are prophecies of the future. Raised in the mortal realm, Everly Morrow has no idea she’s a real-life fairy-tale princess—until she manifests an ability to commune with mirrors. Look. See… What will one peek hurt? Soon, a horrifying truth is revealed. She is fated to be Snow White’s greatest enemy, the Evil Queen. With powers beyond her imagination or control, Everly returns to the land of her birth. There, she meets Roth Charmaine, the supposed Prince Charming. Their attraction is undeniable, but their relationship is doomed. As the prophecy unfolds, Everly faces one betrayal after another, and giving in to her dark side proves more tempting every day. Can she resist, or will she become the queen—and villain—she was born to be? The battle between good and evil is on.

exciting and engrossing new fairytale retelling
May 08, 2019
Overall rating
4.7
Plot
5.0
Characters
5.0
Writing Style
4.0
If you love a snarky heroine, surprise twists and turns, and a fairytale-themed plot, THE EVIL QUEEN is designed to be your new favorite read. This book follows Everly in the first person as she uncovers her history and perseveres to protect the people she loves. From the beginning, we know that girls were born after their mothers ate from a forbidden, magical apple tree, and that they will play a role in bringing a fairytale to life- Snow White. However, which role each girl will play is unknown. The beginning of the book also gives us a taste of where things will end, but we must also follow the journey to get there.

Everly was taken from Enchantia, the magical land where the women had eaten from a tree which is full of mystical creatures, fairies, fairytales, and humans with magic, when she was an infant. She has been raised in the mortal realm with her twin sister, Hartly. Now, as a teenager, Everly has begun to see things in mirrors. In particular, she sees another girl who looks like Snow White and whom she refers to as an angel. As she will soon learn, however, her scrying powers (e.g. seeing things in mirrors) are from her Sorcerian heritage. Sorcerians do not have wells of magical ability like others in the realm. Instead, they must take the power from others to use for their natural abilities but also to take other abilities. If they take a little, the being will feel tired until they regenerate it, but if they take a lot, they will kill them. As such, they are generally considered evil and hated by many.

Although we know that the girls and main characters will play out the tale of Snow White, who will play which role is unclear. Each character seems to possess characteristics or abilities that would point to one or many of the potential roles. For instance, Prince Roth Charmaine (Everly’s love interest) could be Prince Charming or he could be the Huntsman or he could be something else altogether. It is only as the story plays out that we might be able to learn how the fairytale will come to pass.

What I loved: This book surprised me in a lot of ways. Although Everly seems slated to be the Evil Queen, a major theme is that your actions determine whether you are evil or good, and this has many sides/views. For instance, if you do something which could seem evil out of self-defense, does this make you evil? There are also some themes about prejudice (regarding trolls and sorcerers) and sexism which also add to the thoughtful plot. Familial love is also a major theme in the book, particularly love between siblings. The romantic love also adds a nice touch to the overall story.

World-building in this book is top-notch. While the early parts of the book are a little slower due to all the information there is to take in, this pays off later in the book when it is all much easier to understand and imagine. Adding to that, the characters, primary and secondary, are all really well fleshed out and come alive throughout the story. There are so many fantastic characters whom I adored throughout the story, and aside from the main characters, Phobia, a spidorpian, might be my favorite. On the whole, there’s so many to love, hate, and be intrigued by though that I felt completely engrossed in the story and their lives.

As for the main characters, primarily Everly and Roth, they are beautifully crafted. Everly is multidimensional. We see the world through her eyes, and although she is full of snark, she is also full of heart- whether guarding herself, worrying about her family, or caring for her friends. Roth is a completely swoony hero, and while he doesn’t always make the best decisions, he also cares deeply and tries to do what is right.

Final verdict: Overall, this is a consuming, engrossing, and addictive YA fantasy/fairytale retelling that will keep you guessing. Fans of Gena Showalter, Jennifer L. Armentrout, and Gregory Maguire will delight in this exciting new tale that turns Snow White on its head.

Nicole Anderson, Staff Reviewer
"If you have weak, wobbly knees and a pounding heart when you face an audience--don't worry, that's good! In Fearless..."

Abraham Lincoln: The Making of America #3
4.5

Angela Blount, Staff Reviewer
"A highly accessible biographical overview of (arguably) the most renowned and history-altering of all the United States presidents. The book..."

The (other) F Word: A Celebration of the Fat and Fierce
5.0

Samantha Randolph, Promotions Manager
"3 Reasons You Need THE OTHER F WORD on your shelves: 1.) The list of contributors: The range of..."

Stonewall Riots: Coming Out in the Streets
4.0

Nicole Anderson, Staff Reviewer
"Some friendships are unbreakable. In “Hello Girls,” the latest novel by Brittany Cavallaro and Emily Henry you will find a..."

Nicole Anderson, Staff Reviewer
"The Rule of Many is an action-packed sequel to “The Rule of One” written by Ashley and Leslie Saunders, twin..."
The Young Actor's Handbook
4.0

Elisha Jachetti, Staff Reviewer
"THE YOUNG ACTOR’S HANDBOOK by Jeremy Kruse is essentially a 101 course on acting. With a bare bones approach, Kruse..."

A Thousand Sisters: The Heroic Airwomen of the Soviet Union in World War II
4.5

Kim Baccellia, Staff Reviewer
"This is a enthralling telling of the brave Soviet airwomen who flew missions during World War II. They fought in..."

Bethany Wicker, Listings Manager & Staff Reviewer
"SEVEN AT SEA is told in alternating point of views between Erik and Emily Orton. After watching sailboats drifting on..."

Bethany Wicker, Listings Manager & Staff Reviewer
"DEAR ALLY, HOW DO YOU WRITE A BOOK is perfect for anyone interested in writing. It doesn't matter if you're..."

What is Poetry? The Essential Guide to Reading and Writing Poems
4.0

Elisha Jachetti, Staff Reviewer
"WHAT IS POETRY: THE ESSENTIAL GUIDE TO READING AND WRITING POEMS by Michael Rosen is a nonfiction, how-to book intended..."

Karen Yingling, Staff Reviewer
"During WWII, there were dozens and dozens of departments and units doing things that 95% of the population still has..."

Captured: An American Prisoner of War in North Vietnam
5.0

Karen Yingling, Staff Reviewer
"Jeremiah Denton was a naval aviator who was shot down and captured by the North Koreans in 1965, and was..."