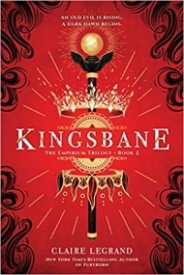 In this sequel to the instant New York Times bestseller Furyborn, two queens, separated by a thousand years, connected by secrets and lies, must continue their fight amid deadly plots and unthinkable betrayals that will test their strength―and their hearts. Rielle Dardenne has been anointed Sun Queen, but her trials are far from over. The Gate keeping the angels at bay is falling. To repair it, Rielle must collect the seven hidden castings of the saints. Meanwhile, to help her prince and love Audric protect Celdaria, Rielle must spy on the angel Corien―but his promises of freedom and power may prove too tempting to resist. Centuries later, Eliana Ferracora grapples with her new reality: She is the Sun Queen, humanity's long-awaited savior. But fear of corruption―fear of becoming another Rielle―keeps Eliana's power dangerous and unpredictable. Hunted by all, racing against time to save her dying friend Navi, Eliana must decide how to wear a crown she never wanted―by embracing her mother's power, or rejecting it forever.

engaging page-turner with fantastic world-building
April 11, 2019 (Updated: May 21, 2019)
Overall rating
4.7
Plot
5.0
Characters
5.0
Writing Style
4.0
This exciting and fast-paced sequel picks up right where the first book left off. For that reason, this book does not work as a stand-alone and catching up on previous events is helpful before heading into this sequel.

KINGSBANE follows several points-of-view, similar to the first book, mostly fluctuating between the two queens, Rielle and Eliana, who are separated by a thousand years. As we know, Rielle was named the Sun Queen based on a prophecy which told of two queens who would save or destroy the world. Rielle lives in a time of magic. Angels, who had been warring with humans before being trapped in another world, are beginning to break through the shield separating the worlds and are siding with or against humans. Empirium, the magic that exists throughout the world, embodies certain people with power of an element. As the Sun Queen, Rielle has the power of all the elements.

Her daughter, Eliana, was taken after her birth and moved through time by the marque Simon, accidentally to a thousand years in the future. Eliana was an assassin before Simon was able to locate her and begin to train her to save the world. In this time, magic is viewed as a myth of the past and Angels control the world, destroying and oppressing humans. Eliana is fighting within herself at knowing Rielle was her mother and the terrible things that Rielle had done as well as against the idea that she should lead or be able to save humanity. We follow Rielle and Eliana in alternating chapters across time as Rielle is led towards the end of the world and Eliana is working to save it.

What I loved: This book keeps you on your toes. With a fast pace and filled to the brim with action, romance, and adventure, there is never a dull moment. This book is full of twists and turns, building and escalating through each chapter. There are also various single chapters from others’ points-of-view, and these were helpful for filling in some of the gaps left by what Eliana and Rielle know. This is a page-turner and with many cliffhanger-esque moments, it is very difficult to put down.

The world and characters are well-built and all three-dimensional with history, places, and flaws. The world-building is as strong as LORD OF THE RINGS, HARRY POTTER, and other epic fantasies. The characters are all fully realized, including the ‘villains’ and they feel fully alive. Along these lines, the romance is top notch for both Rielle and Eliana, and a cherry on top of the delicious storylines.

What left me wanting more: As someone who read the first book around its release, a recap would have been helpful to remembering where we are in time with reminders for key events/people in the book. However, the internet is helpful for such things if one is not rereading the series! This book could also easily be split into two different books for each queen. The writing style frequently has small cliffhangers at the end of a chapter before switching to the other queen (e.g. Rielle or Eliana), so you must read through another chapter before finding out how it resolves. This style makes it feel like you get wrapped up into one life before abruptly switching, getting wrapped up in the other, and abruptly switching again. On the flip side, this style keeps the book intensely interesting and constantly keeps the reader moving through the pages quickly. These are overall minor concerns for a fascinating book.

Final verdict: KINGSBANE is a fantastic sequel to FURYBORN, which will enchant and engross readers. As this is the second in a trilogy, the ending is a big cliffhanger, so be prepared to eagerly await book three. I would also add warnings for explicit sexual content, attempted assault (did not get very far), and rough sex. I would highly recommend for older YA readers who love high fantasy, magic, and intensely engaging storylines.

Olivia Farr, Staff Reviewer
"UNRAVEL THE DUSK is an enchanting sequel and finale to a unique YA fantasy. Maia is a tailor who dreamed..."

Sisters of Sword and Song
4.3

Olivia Farr, Staff Reviewer
"SISTERS OF SWORD AND SONG is an enchanting and lush YA fantasy. The story follows two sisters, Halcyon and Evadne,..."

Straight On Till Morning: A Twisted Tale #8
3.7

Melissa A. Craven, Indie Manager
"Straight on Till Morning is part of “A Twisted Tale” series, a multi author series of fairytale retellings created by..."