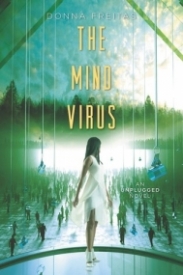 Author(s)
Donna Freitas
Publisher
Harper Teen
Genre(s)
Age Range
14+
Release Date
December 26, 2017
ISBN
9780062118660
Skylar Cruz’s heart is shattered. But even though everyone has betrayed her, Skylar was able to negotiate a way to open the door between the Real World and the App World. Now Skylar must help the people who left the virtual world behind as they become refugees in the Real World.

And for everyone who remained plugged in, a new danger has become evident. Their bodies are mysteriously dying, and it’s because of events Skylar’s sister, Jude, set in motion. A virus has been unleashed that could mean total extinction of the App World—and everyone in it.

Skylar and Jude must set aside their differences and work together if they are to defeat the mind virus before the App World fades away into oblivion.
Tweet

Unplugged # 3
March 24, 2018 (Updated: March 24, 2018)
Overall rating
3.0
Plot
3.0
Characters
3.0
Writing Style
3.0
THE MIND VIRUS by Donna Freitas is the third and final installment of the UNPLUGGED series. The story opens with a new character, Ree, watching her friend die a virtual death, something that had previously been considered impossible. Not wanting the word to spread, the virtual government imprisons Ree for what she’s seen. Meanwhile, back in the Real World, Skylar knows something is amiss when bodies start perishing on the plugs. As rumors of the App World collapsing begin to circulate, Skylar becomes very concerned. The citizens of New Port City are already resistant to the current App World refugees, and it’s doubtful they’ll want to make room for any more. With the lives of so many hanging in the balance, Skylar only has one choice. She’ll have to save the day. Again.

I like the premise of this book as it presents a completely new challenge for Skylar and company. They’re not going against Emory Specter and Jude Cruz again, nor are they fighting over the same problems. The Body Market ended with THE BODY MARKET novel. A system virus also feels like a legitimate complication in their world, and is therefore, a believable adversary.

With that being said, much of THE MIND VIRUS doesn’t work for me. Firstly, the storyline between Rain and Lacy feels forced. All of a sudden, Rain loves Lacy, claiming he’s felt this way a long time, even if he didn’t want to admit it. However, I have a difficult time buying that when in THE BODY MARKET, the chapters written from Rain’s perspective draw a different picture. In the second novel, Rain mentions giving Lacy a chance, but ultimately, the book ends with him declaring his love for Skylar. In THE MIND VIRUS, on the other hand, Rain insinuates that he cares about Skylar so much only because he feels responsible for her. Therefore, the inconsistency between the two books is too convenient. Instead of THE MIND VIRUS facing a love triangle head on, Rain’s abrupt feelings for Lacy make for an easier and cleaner solution.

It’s also odd that no one seems to be mad at Kit, even though he betrayed everyone. Skylar herself is more hurt from his disappearance for the last six months, and Trader has even decided to help him. It’s also clear from Skylar’s first chapter that she’ll get back with Kit. However, there’s never a big romantic reconciliation, and she never confronts him in a serious way about what he did. The whole situation is strange, especially since we wait the majority of the novel knowing they’ll get together and waiting for it to happen.

Though I’m a huge fan of the main characters, who are very well written, Ree’s character is all over the place. Her chapters read as though Freitas discovered Ree’s voice the more she wrote her, but never doubled back to make sure she was consistent. This left me very confused. Ree kicks off the novel as a foil to her vain friend and status-obsessed mother, but by the end of it, she behaves like a younger Lacy. This transformation doesn’t seem to be a part of Ree’s arc, but instead is a fluctuating character depiction.

I also consistently wonder where the Real World government is in THE MIND VIRUS. It feels unrealistic that the fate of all these people rests primarily on Skylar and her friends. Wouldn’t there be other intelligent people who would want to assist, or would have plans of action? For such a major event, it feels unlikely that only Skylar’s crew would respond or be in the know.

On a whole series note though, I’ve really enjoyed spending time with these characters. When I finished reading this third book, I was sad to be parting with them, and I would love to see Freitas release novellas, a spin-off series, or even a fourth book. These books are a masterclass in shifting first person perspective as they break the conventional rules and industry notions, and I’m glad that I had a chance to read them. Freitas addresses many political points in her stories, particularly the dangers of technology. I believe one of her intentions with this series is to make people think twice about how much time we spend on our phones, and in that aspect, she is completely successful.

Olivia Farr, Staff Reviewer
"THIS IS YOUR WORLD is a lovely picture book that introduces the world and the importance of taking care of..."

Olivia Farr, Staff Reviewer
"YAWN is a cute book about the contagious nature of yawns. A little boy begins a yawn that carries through..."

Olivia Farr, Staff Reviewer
"THE BEAR IN THE BOAT is a sweet story of kindness and helping your neighbors. A storm is arriving, and..."

Olivia Farr, Staff Reviewer
"IT'S BATH TIME! is an adorable installment in the Indestructibles series. The book features baby animals and baby who have..."