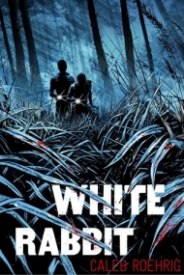 Caleb Roehrig, author of Last Seen Leaving, delivers another spellbinding YA murder mystery in White Rabbit. Rufus Holt is having the worst night of his life. It begins with the reappearance of his ex-boyfriend, Sebastian—the guy who stomped his heart out like a spent cigarette. Just as Rufus is getting ready to move on, Sebastian turns up out of the blue, saying they need to "talk." Things couldn’t get worse, right? Then Rufus gets a call from his sister April, begging for help. He and Sebastian find her, drenched in blood and holding a knife beside the dead body of her boyfriend, Fox Whitney. April swears she didn’t kill Fox. Rufus knows her too well to believe she’s telling him the whole truth, but April has something he needs. Her price is his help. Now, with no one to trust but the boy he wants to hate yet can’t stop loving, Rufus has one night to clear his sister’s name . . . or die trying.

A thrilling mystery
November 11, 2017
Overall rating
5.0
Plot
5.0
Characters
5.0
Writing Style
5.0
Rufus just wants one day of semi-fun, something he hasn’t had since his ex-boyfriend, Sebastian, wrecked his heart. But then, Rufus gets a call from his sister, April, saying she needs help, right at the time Sebastian finds him and asks to talk. Sebastian and Rufus rush to find April, but when they do, they get a shock: April is covered in blood with a knife in her hand and the body of her boyfriend, Fox, dead beside her. April promises them she didn’t do it and doesn’t know what happened. They strike a bargain to clear her name, and suddenly, Rufus is back in the company of his ex with a murder to solve…and all he wanted was a nice party on the Fourth of July.

WHITE RABBIT is already one of my top 2018 reads. The pace enters a break neck speed from the first page and doesn’t stop until the end. The whole story takes place in only a number of hours or a couple of days, and each second is used masterfully. The mystery plot has a fantastic build, and though I eventually suspected the right person, there were still plenty of twists and turns that left me gasping in surprise.

As well done as the mystery is, the personal relationships might even top that as my favorite part of the novel. Rufus and Sebastian’s relationship is filled with great romantic tension, and Rufus is immediately relatable in the beginning of the novel as a character who is struggling to get over a break up and just wants some peace and quiet. I also love the dynamic between Rufus and his family. He and his mom are close, which partially motivates him to help April out, as she offers much needed money for him in exchange. Moreover, April is a strong secondary character, equally frustrating and surprisingly kind at different moments.

Caleb Roehrig’s latest continues to support his status as a must-read author. WHITE RABBIT is a thrilling mystery with breathless pacing, swoony romance, and an incredible adventure.

White Rabbit is going to be the YA thriller of 2018. I’m calling it now. This murder mystery kept me on the very edge of my seat the entire time I read the book, and even up until the very end, I still had no idea who the killer was or how the book would conclude. A thriller in every sense of the word.

I’m not exaggerating when I say you won’t see any part of White Rabbit coming. Just when you think you’ve figured out who the killer is, your theory is ripped apart and you have to sit there trying to figure out a new one all over again.

White Rabbit is just so clever: the plot takes place over the course of one night, but nothing ever feels rushed. The protagonist, Rufus, is dragged from one dangerous situation to another as he investigates the murder of rich kid, and the prime suspect being his half-sister. Meanwhile, he’s struggling with the fact that he and his mother may lose their home, while also spending the entire night with his ex-boyfriend who dumped him in a cruel way. We also get little flashbacks to the beginning of Rufus and Sebastian’s relationship, which was one of the highlights of the books for me. There’s a lot of going on plot-wise, but each issue is given enough page time, and nothing ever feels like too much.

I absolutely adored the characters, particularly the MC, Rufus. Rufus has so much on his plate, from worrying about his mother, to his horrible father intent on ruining them, to the bullying he deals with because he’s gay, to his violent episodes. He takes so much on his plate, and you can’t help but feel for him, especially as the night progresses. His ex-boyfriend, Sebastian, was another character I loved, and trust me when I say you will ship these two like crazy. Sebastian is deeply closeted, and still struggles with what to label himself. The rest of the characters – all of whom are suspects – are both loveable and hateful and (probably) guilty, but you can’t help but like them. Well, at least I did. But my favourite character was Lucy, Rufus best friend, because she’s supportive, loving, fun and incredibly positive.

As the novel focuses on a murder mystery, the book still discusses some really important topics, including coming to terms with one’s sexuality, understanding that it’s ok if you don’t have a label for yourself yet, thinking that bullying is just fun and games until you find yourself the victim, and what it’s like being poor surrounded by rich teenagers. Roehrig talks about these issues in a frank, in-your-face manner – it’s uncomfortable, but that’s the point. Despite the fact that the book is about a murder, it also teaches some valuable lessons about bullying and privileged rich kids.

White Rabbit is such a compelling, unputdownable mystery novel. Everything about this novel, from the characters, to the story, to the writing, was remarkable. I highly recommend this intriguing, Own Voices book. You really won’t know what hits you. Now, if you’ll excuse me, I’m going to go buy Caleb Roehrig’s other mystery, Last Seen Leaving.

Good Points
Check out my blog for more reviews: thebookcorps.wordpress.com

Lorrie Top 50 Reviewer 84 reviews
Report this review Comments (0) | Was this review helpful to you? 0 0
Powered by JReviews
How to resolve AdBlock issue?
X