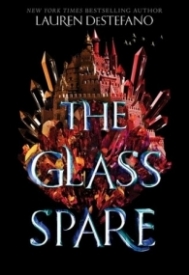 The first in a new fantasy duology, The Glass Spare is a gorgeously told tale of love, loss, and deadly power from Lauren DeStefano, the bestselling author of the Chemical Garden series. Perfect for fans of Shannon Hale and Renee Ahdieh. Wilhelmina Heidle, the fourth child and only daughter of the king of the world’s wealthiest nation, has grown up in the shadows. Kept hidden from the world in order to serve as a spy for her father—whose obsession with building his empire is causing a war—Wil wants nothing more than to explore the world beyond her kingdom, if only her father would give her the chance. Until one night Wil is attacked, and she discovers a dangerous secret. Her touch turns people into gemstone. At first Wil is horrified—but as she tests its limits, she’s drawn more and more to the strange and volatile ability. When it leads to tragedy, though, Wil is forced to face the destructive power within her and finally leave her home to seek the truth and a cure. But finding the key to her redemption puts her in the path of a cursed prince who has his own ideas for what to do with Wil’s power. With a world on the brink of war and a power of ultimate destruction, can Wil find a way to help the kingdom that’s turned its back on her, or will she betray her past and her family forever?

A fast-paced King Midas retelling
October 23, 2017 (Updated: October 23, 2017)
Overall rating
5.0
Plot
5.0
Characters
5.0
Writing Style
5.0
I've not had the opportunity to read any of Lauren DeStefano's other books though I've been recommend them over and over again so when this book came across my path, I knew I had to grab it and I am so glad I did!

The Glass Spare is a twist on the King Midas myth, where the protagonist turns everything and everyone she touches into precious gemstones. Introduced as a steampunk/fantasy mash-up, The Glass Spare revolves around a handful of characters, and one plot. Wil, the only daughter of a king of the empire, has grown up in the shadows of her older brothers, raised instead to become the king's most reliable spy. Although she has three brothers, Wil is only close to two: the heir, Owen, and the scientist Gerdie. DeStefano really brought to life the complicated relationship of siblings, and the close bond that comes with loving someone unconditionally.

As the only one able to sneak in and out of the palace unnoticed, Wil is also the most reliable person Gerdie can send to pick up supplies for whatever machine or experiment he is working on. Her sense of adventure gave The Glass Spare that whimsical tone to it.

It's during one of these excursions that Wil is attacked by an angry vendor and her power manifests for the first time. Whatever Wil touches, as long as it's living, will crystallize until that person, or thing, is dead. When things take a turn for the worst she is banished from her kingdom, throwing Wil into an adventure she hadn't anticipated.

Wil soon comes across Loom, the son of a rival kingdom. A banished prince himself, Loom is trying to lead a revolution. Banished for the attempted murder on his father's life, he has no allies except his ex-fiancé and her young son, but discovering Wil's power means having one weapon in his arsenal that his father does not have: the power to kill with a single touch.

I really enjoyed the characters. The queen, Wil's mother, struck me as an incredibly important character. She loves her children more than she loves her husband, but it's all overshadowed by her OCD, her fretful need to tap surfaces and count under her breath, terrified that if she counts wrong, mis-taps the pattern, something terrible will befall her children. Particularly Owen, who spends a lot of time, as the heir, traveling the world and making connections.

The princes, individually, were also very interesting. Owen as the good son, the clever heir: he had the charisma, the personality, the good hair. Gerdie, and his ever working brain, who Wil and Owen love and protect fiercely. The sudden explosions caused by his experiment added a good dose of comic relief to the novel. Even the other brother, Baren, is interesting: he's mean, jealous of his brothers' and sister's friendship, but is also a tortured soul in his own right. I can't wait to see where she takes these relationships in the second book - I have the feeling we're just seeing the tip of the iceberg with these characters.

Overall, this was an incredibly easy world to get into and the story kept me turning page after page.

Overall rating
3.0
Plot
3.0  (1)
Characters
3.0  (1)
Writing Style
3.0  (1)
Already have an account? Log in now or Create an account
OK
October 23, 2018
Overall rating
3.0
Plot
3.0
Characters
3.0
Writing Style
3.0
"The Glass Spare" follows Wil, the youngest child of a warmonger king. One day, her life changes- in a dispute, her pulse races and her touch turns a human into a gemstone. With a twist on the King Midas touch (with any precious gem), Wil is at first intrigued and then later horrified. Seeking a way to get rid of this cursed ability, she ventures into the world. She soon meets up with a handsome boy, Loom, the prince of a rival kingdom. Loom is the love interest that doesn't quite fully develop until the end of the book.

Overall, I liked the premise, but I did get lost in places where it felt like filler/the story did not advance so much. I would have liked a faster pace, I think, to build the world more and push the characters into more activity. However, I really did like the premise and am looking forward to reading the next in the series, so I am bumping up my rating.

Olivia F Top 50 Reviewer 123 reviews
Report this review Comments (0) | Was this review helpful to you? 0 0
Powered by JReviews
How to resolve AdBlock issue?
X