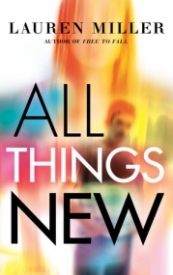 From the author of PARALLEL and FREE TO FALL comes a novel about how it feels to be broken and what means to be real. Seventeen-year-old Jessa Gray has always felt broken inside, but she's gotten very good at hiding it. No one at school knows about the panic attacks, the therapy that didn't help, the meds that haven't worked. But when a severe accident leaves her with a brain injury and visible scars, Jessa's efforts to convince the world that she's okay finally crumble--now she looks as shattered as she feels. Fleeing from her old life in Los Angeles, Jessa moves to Colorado to live with her dad, but her anxiety only gets worse in the wake of the accident. That is, until she meets Marshall, a boy with a heart defect whose kindness and generous spirit slowly draw Jessa out of her walled-off shell and into the broken, beautiful, real world--a place where souls get hurt just as badly as bodies, and we all need each other to heal.

Jessa Gray has been broken on the inside ever since her parent’s divorce, when her father moved several states away and her mother quickly remarried. While her mother was busy with her new family, Jessa fell into a crippling anxiety disorder that cost her all social relationships—all except for the boyfriend crutch she thought she could lean on. When that crutch fails and she ends up in a horrific car accident, her brokenness suddenly extends to a newly scarred face and a brain injury that induces something called aphantasia(mind’s-eye blindness.) Along with something else… something she’s afraid might mean she’s crazy.
So when her father offers to move her from California to Colorado for a fresh start, Jessa accepts—unable and unwilling to return to the life she’s lost.

I readily admit that first-person present-tense is among my least-favorite in terms of storytelling methods. And yet, I can't recall the last time a contemporary flew by so well for me. Almost 80 pages in, I felt like I’d just started. The content is weighty without feeling weighed down (which is quite the accomplishment.) And while Jessa’s looping introspection and avoidance is often frustrating, it’s also believable. I wouldn't call it fast-paced, so much as fluid and effortless reading.

”It registers that I am sitting there topless, but this body I am in doesn't feel like mine anymore so the half-nakedness seems irrelevant, like a rumor, something I'm supposed to care about but don't.”

I hadn't heard of aphantasia before this book. Which was surprising, given my medical background. It was also a welcome learning opportunity. Aphantasia was first written about over a hundred years ago, and apparently exists in 2% of the population—meaning 1 in 50 people may experience it, temporarily or permanently. (Many don't even realize they have it, if they acquired in congenitally.) This reader found it both fascinating and kind of horrible; the idea of being able to recognize people and things in front of you, but not being able to picture them--or picture anything at all--when you close your eyes.

Marshall was my favorite part of this story.
Flying in the chiseled face of every brooding alpha-male bad-boy stereotype, Marshall is a charmingly upbeat and extroverted love interest. He’s funny, sharp-witted, keenly observant, and prefers sitting at the autism-spectrum table to mingling with his more mundane peers. He’s also a somewhat concerning heart patient, who has perhaps allowed physical limitations too much license in his identity. I adored him—and his reliable banter with all those around him.

"I nod seriously, "Supes."
"You're mocking me."
"A little bit."
"People say supes!"
"What people?"
"I can't believe you're shaming me right now. I'm very sensitive about my use of cool vernacular."
"Then we're good. Because you haven't used any." I flash a grin.

If I have one complaint about this book, it’s that there isn’t enough Marshall. He isn’t introduced until page 85. Not that it’s a slog to get to that point, but once he joins the cast, he effectively steals the spotlight in every scene he’s in. While this particular story is clearly about Jessa, it’s a pity we couldn’t have a bit of Marshall’s perspective as well. (A little more focus on the romance would have likely sufficed for me.)

Content Note: The book contains some mild language some may find objectionable, and there are some naturally-developing spirituality threads that may be off-putting for those with low-to-no tolerance for the realistic portrayal of characters with spiritual lives. (I personally found it all gradual, organic, and well-incorporated—inclusive, yet mercifully devoid of preachiness.)

All Things New encompasses themes of heartbreak, empathy, invisible illnesses, familial forgiveness, positive and negative coping mechanisms, neuro-atypical understanding, and above all, hope. I can honestly say I look forward to getting it into the hands of my goddaughters.

"Someday those bruises inside you will heal. You can't know when someday will come, or what life will look like when it finally does. ... But in a way it doesn't even matter because someday isn't what we have. What we have is right now, this moment, when things aren't okay yet, but in a way they are already, because in the end they will be, and as long as that's true, it's enough."