Speak Of Me As I Am 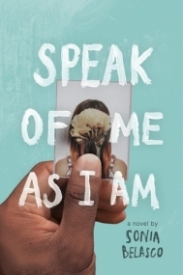 A moving story of grief, honesty, and the healing power of art—the ties that bind us together, even when those we love are gone. Melanie and Damon are both living in the shadow of loss. For Melanie, it's the loss of her larger-than-life artist mother, taken by cancer well before her time. For Damon, it’s the loss of his best friend, Carlos, who took his own life. As they struggle to fill the empty spaces their loved ones left behind, fate conspires to bring them together. Damon takes pictures with Carlos’s camera to try to understand his choices, and Melanie begins painting as a way of feeling closer to her mother. But when the two join their school’s production of Othello, the play they both hoped would be a distraction becomes a test of who they truly are, both together and on their own. And more than anything else, they discover that it just might be possible to live their lives without completely letting go of their sadness.

Speak of Me as I Am
June 11, 2017 (Updated: June 11, 2017)
Overall rating
3.3
Plot
3.0
Characters
4.0
Writing Style
3.0
SPEAK OF ME AS I AM by Sonia Belasco is a contemporary young adult novel that deals with grief and the loss of loved ones. The story is told in a shifting duel perspective between Melanie, a teenage girl whose mom has died of cancer, and Damon, a boy whose best friend committed suicide. Damon and Melanie meet unexpectedly, but grow closer during the high school production of William Shakepeare’s OTHELLO, in which Damon plays the title role. Damon struggles with the ending scene, during which Othello kills his wife and then, himself. The subject matter hitting too close to home forces Damon to finally open up about what he has experienced, and Melanie, struggling with her own remorse, is the perfect person to listen. Together, the two of them help each other learn to cope and how to best honor the lives of the dead.

At the end of this novel, the author, Sonia Belasco, leaves a brief note about her own personal life experience that inspired her to write this novel. Her ex-boyfriend took his own life and she was the last person to talk to him. Though this story is not actually a memoir, it echoes real events that have happened to Belasco, which is what makes the novel feel so authentic. In fact, SPEAK OF ME AS I AM is relatable for anyone who has ever lost someone they cared about to a disease, accident, or suicide, and the benefit of having two protagonists is the audience gets a glimpse at the varying ways people mourn. Ultimately, Belasco gives the subtle lesson that there is no wrong way to handle these circumstances, and no one has to go through them alone.

Setting the novel in Washington D.C., Belasco makes sure her characters are representative of the area. The characters are different genders, races, and ethnicities, have different sexual preferences, and are from different socio-economic backgrounds. Belasco has created a voice for many diverse people to be heard, which is important since death is not selective. It happens to everyone.

With that being said, the dialogue does not always feel authentic. Though the interior monologues, on the other hand, are more genuine, as soon as the characters start to speak, I am pulled out of the world. Additionally, the young adult market is saturated with books on loss, particularly in relation to cancer and suicide. I really needed this novel to make a fresh, profound point in order to stand out from what has already been written, and I am not sure it did. Yet, while the story is not quite unique enough for me, I do believe that it is important.

SPEAK OF ME AS I AM has the power to help so many people, especially those who need someone to understand them. Whether this book lands in the hands of those deep in sorrow or those considering suicide, it could completely change someone’s outlook, and for that reason, it should be read.