One Wish Away (Djinn Empire #1) 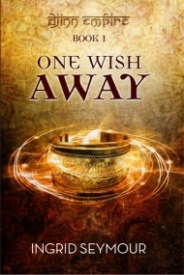 ** Aladdin meets Twilight ** A secret. A choice. A curse. Romance is overrated. Marielle has had it with boys, especially afterher vile ex. That is until Faris comes along with his deep, dark eyes andtantalizing secrets. Inevitably, he draws her in, even though she's been warnednot to trust him. But when attempts on her life begin, Marielle suspects Faris. His seductiveways and stalking episodes are a dead giveaway, right? Her heart falls into turmoil.Should she run into his arm or run away in fear? Desperately, she tries to findanswers, but what she finds is a powerful monster who wants to torture her formere pleasure's sake. Because Marielle is right in the middle of an ancient battle between twoimmortal Djinn. They both want something from her. One, her devotion. The other one, her life. One Wish Away is a young adult paranormal romance that will appeal to lovers of Twilight, the Fallen series, and Tiger's Curse.

Mysterious and Full of Magic!
June 02, 2017
Overall rating
3.3
Plot
3.0
Characters
3.0
Writing Style
4.0
One Wish Away is a magical, quick read full of action, romance, and twists. In it, we follow Marielle, a young adult who just lost her grandfather and perhaps even her sanity. Unsure of what to make of the hallucinations and creepy eyes that seem to follow her everywhere, Marielle is left on edge and unsure of everything she has ever known. Mix in a djinn named Faris, and Marielle's world seems to flip upside down, because now she has more problems that she can't simply wish away.

The premise intrigued me. I don't usually read about djinn, but I know this author from previous works so I was really excited to delve into this one! Full of mystery and magic, One Wish Away kept me engrossed and on the edge of my seat! What I enjoyed the most was the curse. Faris is a djinn because of a curse placed on him, and he believes Marielle could be the key to lifting the curse. Drawn to her as she is to him, they struggle to balance their past problems as well as the present ones.

Marielle is heartbroken as her grandfather just died, she has debt to deal with, her alcoholic father is back in her life, her ex boyfriend won't leave her alone, and now she has to deal with Faris. Despite all the pressure and stress Marielle struggles with, she manages to keep her head high. Rumors mean nothing to her when she has so much more dire problems to deal with. However, while I understand that she is hurting, I also found her a bit annoying. She is ill tempered and easily angered, always saying harsh things and lashing out at others for no reason, acting cold. She says she can't deal with emotions well, and this is evident as she is unsure what to do when a friend is hurting and it excuses quite a bit of her behaviour. But other times, she feels too much and easily bursts. Even near the end, she was lashing out, just at someone else because she learned to respect other characters. I like her, don't get me wrong, she has a lot of potential. However, the entire book provided us with a character who complained, ranted, and lashed mostly without good reason. I definitely hope she develops more within the next novel.

Faris, of course, is smoldering hot, rich beyond belief, and easily falls in love with Marielle. She spent most of her time throwing harsh words his way, but he found a way to see through her and fell in love with what he saw. He read her so easily, and yet he still managed to mistake her feelings a few times. I like him, we get to see a strong, determined young man try his hardest to stay in the world with humans instad of trapped in a stone. He is usually clear with his emotions, never hiding anything unless he had to. He is kind and compassionate, and finds joy in granting selfless wishes. He is not greedy, and Marielle learns a lot from him.

Mavin is a very good friend of Marielle's, her work out buddy. Daily runs aren't the only thing theyenjoy doing together. They hang out quite a bit, and it is clear that he really likes her. Compassionate and worried for her, he tries his best to stay by her side and help out. But then he starts acting odd and leaves Marielle feeling worried and paranoid. He is a great character, but honestly it feels like he's in the story as a plot point.

Jeremy is the awful ex boyfriend. Vulgar and not above insulting Marielle whenever he sees her, he is a real jerk who likes to take advantage of women. Not only does he attempt to force himself on her, he also drugs other girls and has an overall horrid personality. His character is a lesson. We can't get away with things, especially not forced sexual acts. This is a subplot of sorts, showing us the bad and then the good, when justice is served. I love that the author did not allow Jeremy to get away with his actions. It was empowering and could potentially give hope to those who are victims themselves. I am also glad that he never got far enough to actually have sex with an unwilling partner.

Romance wise, the couple that gets together is adorable! Each page with that blossoming romance, and you'll find yourself glued to the scene unraveling in your mind. I will admit however, that the attraction was instant. It was just a matter of one character admitting their feelings to themself before anything actually happened.

The writing flows well, it is easy to fall into the story and let the characters take over in your mind. Easy to follow and enjoy, you'll find yourself nearing the end of the story before you're ready! Even when some twists are predictable, you'll find yourself enjoying the story. I will admit however, that the world building has a lot of potential to be expanded on, such as where djinn live and why they hate humans so much and just an overall image of where the characters currently are.

Overall, One Wish Away is an engrossing read that you won't be able to get enough of! Mysterious occurrences and battles with magic will keep you entertained for sure.
Good Points
Good writing