That Thing We Call a Heart 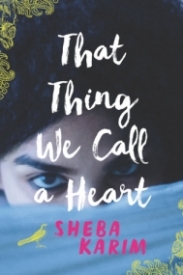 Shabnam Qureshi is a funny, imaginative Pakistani-American teen attending a tony private school in suburban New Jersey. When her feisty best friend, Farah, starts wearing the headscarf without even consulting her, it begins to unravel their friendship. After hooking up with the most racist boy in school and telling a huge lie about a tragedy that happened to her family during the Partition of India in 1947, Shabnam is ready for high school to end. She faces a summer of boredom and regret, but she has a plan: Get through the summer. Get to college. Don’t look back. Begin anew. Everything changes when she meets Jamie, who scores her a job at his aunt’s pie shack, and meets her there every afternoon. Shabnam begins to see Jamie and herself like the rose and the nightingale of classic Urdu poetry, which, according to her father, is the ultimate language of desire. Jamie finds Shabnam fascinating—her curls, her culture, her awkwardness. Shabnam finds herself falling in love, but Farah finds Jamie worrying. With Farah’s help, Shabnam uncovers the truth about Jamie, about herself, and what really happened during Partition. As she rebuilds her friendship with Farah and grows closer to her parents, Shabnam learns powerful lessons about the importance of love, in all of its forms. Featuring complex, Muslim-American characters who defy conventional stereotypes and set against a backdrop of Radiohead’s music and the evocative metaphors of Urdu poetry, THAT THING WE CALL A HEART is a honest, moving story of a young woman's explorations of first love, sexuality, desire, self-worth, her relationship with her parents, the value of friendship, and what it means to be true.

A book of laughter and tears
June 02, 2017
Overall rating
4.3
Plot
4.0
Characters
5.0
Writing Style
4.0
Shabnam Qureshi is done with high school, ready to move on to college, and start a new chapter in her life. Her final high school weeks are filled with slip ups, mistakes, and lies, and Shabnam is ready to get away from it all. When she finds a job at a pie shack for the summer, everything changes. Shabnam meets Jamie, a cute boy who seems fascinated by her, and the two bond over poetry. However, Shabnam’s best friend, Farah, whom Shabnam has felt awkward around since Farah started wearing a headscarf, is suspicious about Jamie. As the summer unfolds, Shabnam will learn more about herself, love, friendship, and family.

THAT THING WE CALL A HEART is a beautifully emotional story that tackles stereotypes, first love, cultural norms, and more. Sheba Karim creates an easily relatable protagonist in Shabnam, a young woman who wants to fit in. What I love most about this novel is that it focuses on more than romantic matters of the heart. It delves into romantic love, friendship love, family love, and self-love.

I also love that Jamie isn’t a glaringly suspicious guy. His charm and attention makes it easy to see why someone could get a pretty big crush quickly. Yet, as Shabnam continues her journey, readers will see hints of something a little more selfish in him and the ways in which first love can create rose-tinted glasses. But most of all, Shabnam and Farah’s relationship is nuanced and complex, full of tense moments, heartfelt conversations, and a multifaceted exploration of what it means to be a true friend.

Overall, THAT THING WE CALL A HEART will have you laughing and crying in equal measure.

Meet Cute: Some people are destined to meet
4.0