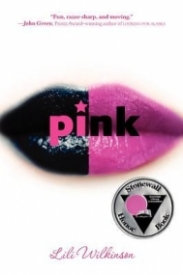 The pink jumper was practically glowing in my grey bedroom. It was like a tiny bit of Dorothy’s Oz in boring old black-and-white Kansas. Pink was for girls.

Ava Simpson is trying on a whole new image. Stripping the black dye from her hair, she heads off to the Billy Hughes School for Academic Excellence, leaving her uber-cool girlfriend, Chloe, behind.

Ava is quickly taken under the wing of perky, popular Alexis who insists that: a) she’s a perfect match for handsome Ethan; and b) she absolutely must audition for the school musical.

But while she’s busy trying to fit in — with Chloe, with Alexis and her Pastel friends, even with the misfits in the stage crew — Ava fails to notice that her shiny reinvented life is far more fragile than she imagined.

Debut author Wikinson takes a lighthearted but timely and resonant look at a teen's attempts to don a new personality and figure out who she really wants to be.
Tweet

Ava has come out as a lesbian and is dating Chloe, who prides herself on not being like others her age, and who encourages Ava to do the same. However, Ava wants to try new things, to go to a new school, and maybe even to wear pink.

She tries to keep her school and personal lives separate, hiding her relationship with Chloe from her classmates, and not telling Chloe that she's signed up to help with the school play. But as Ava questions her sexual orientation, her relationship with Chloe, and what she wants for her future, her secrets catch up to her and she can't hide who she is, or who she thinks she may be, any longer.

I was impressed by this book because I often find it hard to get into YA contemporary novels, but I had no trouble getting into this one. While it felt a little bit slow at times, overall I found it quite fast-paced and I was never bored.

I thought it was interesting to see characters who were all so different compared to each other. There's Chloe, the rebel. Then there's Ava, who wants to fit in. Other characters included various outcasts, goths, theater kids and the popular crowd. However, while these groups are often found to be cliche, they didn't feel that way in this book. The presence of characters from these cliques seemed, to me, to mirror real life through a portrayal of the way that high school and life in general is often divided up, including prejudices, secrets and all.

I liked the way that real-life issues, such as sexuality, school, and the future were addressed and discussed through Ava's thoughts and experiences. I understood a lot of Ava's confusions, worries, and hopes, which helped me to care about Ava, and kept me reading on. I found her to be an interesting and relatable character.

However, I feel that a few things were missing from this book. For example, I wish there had been more discussion and scenes considering Ava's relationship with her parents. I wanted to know about her past with them, maybe about less happy times, or when they disagreed. I feel that this would have made for some interesting dialogue.

I also wish that this book hadn't completely skipped over multi-sexual identities such as bisexual and pansexual. When Ava is exploring her sexuality, it would make sense that these words would come up at least once somehow, whether in conversation or Ava's own research. Considering Ava's struggle, and the context of much of her dilemmas and thoughts expressed throughout the novel, the idea that people don't actually have to "choose" between feeling attraction towards men, women, or nonbinary people would probably have crossed her mind at some point. And yet, I don't feel like this idea was present, in any significant way, throughout the book.

I found it interesting how the author approached the theme of belonging, whether belonging to a social group, a clique, or a relationship. Usually when this theme is addressed, I've noticed more of a trend towards the protagonist wanting to be different, wanting to escape the clutches of normalcy and venture into the unknown. Ava's story was the opposite. She wanted to fit in, to be like everyone else and to be "normal". This was a nice change and made for a refreshing read.

This was an enjoyable, quick read. I recommend this to readers who enjoy YA contemporary, and to those looking for books with themes such as sexuality and belonging.
Good Points
A great contemporary novel.
Diverse characters.
Discusses real life issues.

Wren Top 100 Reviewer 40 reviews
Report this review Comments (0) | Was this review helpful to you? 0 0
Powered by JReviews
How to resolve AdBlock issue?
X