Love Evil: To whom my heart falls prey 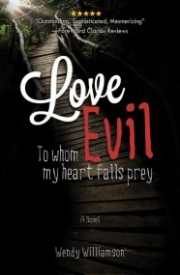 Sarah Freedman, a new Peace Corps volunteer, lands in Cameroon and moves in with an African woman, Iya, for three months of training. Despite cultural differences, they become friends and Iya introduces Sarah to her world. Animism---religion of the tribal people---sneaks into Sarah’s mind but she thinks it’s superstition and writes it off. Then, on a weekend site visit, she befriends a traveling researcher, Daniel Lumiel. He studies cymatics, visible sound and vibration, and how matter affects consciousness. There’s an attraction between them, but he has to go to back to France the next day. They exchange contact information and he asks her if she can keep an ancient book for him; it’s valuable and he can’t bring it through airport security. She agrees and supernatural things start happening, which intensify when she finishes training and goes to work in a village. What was superstition is now real and it’s connected to the book. Panic, and a strong lure to Daniel, leads her to France to find answers. There, she’s able to relax again and a romance starts between them. Daniel acts like her savior, but little by little, Sarah discovers that he is not who he claims to be. While she knows that he is dangerous, and may be evil, she’s in love and she can’t stop her feelings. She begs God to help her, but there is no reply. A good god would protect her from evil, she thinks—just like her father, God was not there. Sarah questions God and his Garden of Eden. “It was God’s garden,” said Sarah. “Why was there knowledge of evil in God’s garden? Why was there knowledge of evil in God? Everything in the garden and in God should have been good, unless—” Similar to the popular spiritual intrigue, Dan Brown’s The Da Vinci Code, an interplay between cultures, beliefs, angels and demons make this love inspired suspense novel a must-read for anyone who believes in creation.
Tweet

Meet Cute: Some people are destined to meet
4.0

Michelle Lynn, Assistant Indie Manager
"Wow, this book didn’t turn out to be anything like I expected. The story: Tamara is a young..."

Olivia Farr, Staff Reviewer
"PREPPED is a really captivating YA contemporary fiction. Becca is 17 years old and dreams of going away to college..."

An Enchantment of Ravens
5.0