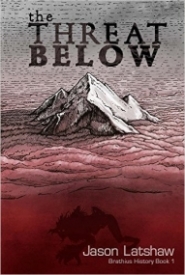 "A promising debut that could find success beyond the YA market." -Kirkus Reviews "This postapocalyptic YA novel is a fast-paced, fascinating slam dunk of a book. The Threat Below is... a mind-expanding tale of postapocalyptic humanity and truth--and the survival of both." -5 Star Clarion Review A Heart-Pounding Dystopian YA Thrill-Ride Three hundred years ago, something arose and pushed humanity to the brink of extinction. Now, a small remnant – the ancestors of the few survivors who were able to escape the massacre below – lives above the clouds, on the top of a mountain. But there's been a change. Their water supply is being poisoned. Someone, or something down below is trying to kill them. Now an expedition, including seventeen year-old girl Icelyn Brathius, must descend and face the monsters that wiped out civilization centuries ago. The Shocking True Nature of the Threat Below As Icelyn faces dangers in a world humans are not meant to survive, she learns that not everything is as it seems, and uncovers an ancient revelation, then faces a choice that may change the fate of everyone above and below the clouds. Will Icelyn be strong enough to both survive and bear the terrible secret? Join Icelyn Brathius as she leaves everything she has ever known to journey to the place no one was ever supposed to go.

Beauty and Hope Delivered by Disaster and Monsters
June 17, 2016 (Updated: June 18, 2016)
Overall rating
5.0
Plot
5.0
Characters
5.0
Writing Style
5.0
Mountaintop. Humanity’s last stand, after near obliteration from the Threat Below, by which Jason Latshaw’s epic book is titled. The humbled hundred or so inhabitants of Mountaintop, called the Kith, rely on legend mixed with history of the Apriori, their ancestors who once ruled the earth. The Kith are walled into their home in the sky by fear and the persistent Cloudline that obscures vision of Down Below. Their world is meager and desperate, their society stratified and rigid. In the first few pages, a hard line is drawn between main character Icelyn, the prissy, intelligent Cognate daughter of the Kith’s leader, and Adorane, her Veritas best friend and possible brave, brawny love interest. Segregation and prejudice are accepted here as the way for a fragile existence to survive.

Not thrive. Imagine the peak of a mountain at the top of the world, after civilization has fled a deadly, mysterious plague and the planet has probably been flooded by rising oceans. The air is thin. Scrubby trees are more like bushes. Acorn cakes are a staple. Later in the book, Icelyn finds a comb Down Below and she marvels at it. Has she never brushed her hair? You’ll be amazed when you find out what ultrabears and ultralions are. Yes, Mountaintop is the kind of place that, should humanity survive, what’s the point? It’s clear this place is only half of the story. Almost immediately, Icelyn and Adorane wander beyond a rotting, three-hundred-year-old barrier between the apparent safety of Mountaintop and the rumored certain death of Down Below, and there is no doubt about where our heroine and her beau will end up.

But Latshaw keeps his readers guessing right along with the sheltered, pampered Icelyn. The mystery is compelling, even darn right frightening, and each revelation along the way is worth it, not rushed or predictable. In fact, every time I thought I’d figured it out—what the Threatbelows are, or how humanity met its fate, or even who Icelyn herself is—I was surprised by Latshaw’s imagination. He speaks through his vivid characters, some that I adored and others I’d like to choke, and the action happens in their choices, dialogue, and thoughts. Whether the cowardly Kith leader is squirming, the devoted and fearless Eveshone is rescuing Icelyn again, or the constantly shifting morals of Torrain are playing out, this world is revealed by those living in it.

My favorite part, however, is that Latshaw isn’t afraid to delve deeper than his own story. Though fantastical and unique, his world bears enough resemblance to ours to stoke fear and tickle conscience. Gun violence in Mountaintop mirrors the debate over our right to bear arms, especially when these fictitious leaders are using guns to proliferate fear and violence as a means to control the population. One of them has found an ancient text and quotes Jenny Holzer, “Fear is the most elegant weapon. Your hands are never messy. Threatening bodily harm is crude. Work instead on minds & beliefs, play insecurities like a piano.” Latshaw is good at turning a phrase to grab attention, and we find essential truths in gentle statements as well: “So much of life is lived looking away from each other, afraid to face a person as they really are, deflecting feelings and ignoring vital moments.” Or, not so gentle: “They live in a world of magic, but take it all as a matter of course. They didn’t realize it, but they were Gods.” This last is spoken of the extinct Apriori, when Icelyn sees their cellphones and flat screens in a memory. Gods who invented their own demise? Nervous laugher from the crowd…

The Threat Below would be equally enjoyed by both genders, with a strong, admirable heroine (feminine and regal, with very little whining) and plenty of action and violence (gruesome, though not gratuitous). Latshaw’s writing is top-notch, and teens ready to move onto more adult literature should be able to handle the language and the length of this book. Adults will love it just as much, because there are many layers of understanding in The Threat Below, sort of like a Disney movie that is fun for kids but only truly understood by their parents. Not that this book is an easy fairytale read, and don’t be looking for a sweet ending tied up in a pretty package. The journey is worth it, though, and you’ll love every step. Latshaw delivers beauty and hope in a way you’d never expect.

Sarah Wathen Top 500 Reviewer 8 reviews
Report this review Comments (0) | Was this review helpful to you? 5 0

Jazmen Greene, Newsletter Manager
"I feel like I've been asleep for the last 31 years and I just woke up. I am woke. ..."

The Opposite of Always
5.0

Jazmen Greene, Newsletter Manager
"Opposite of Always is a heartfelt and stunning debut; that is worthy of all praise. I am in love..."

Kim Baccellia, Staff Reviewer
"Fourteen friends who grew up together in Japantown, San Francisco find themselves and their families sent off to incarceration camps..."

Paige Cee, Staff Reviewer
"Clara Shin is the class clown and definitely qualifies as a troll too. (Big difference between the two, I'm not..."