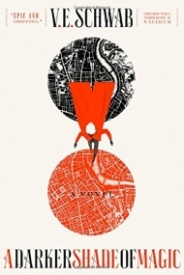 STEP INTO A UNIVERSE OF DARING ADVENTURE, THRILLING POWER, AND MULTIPLE LONDONS.

Kell is one of the last Travelers-magicians with a rare, coveted ability to travel between parallel universes, connected by one magical city.

There's Grey London, dirty and boring, without any magic, and with one mad king-George III. Red London, where life and magic are revered-and where Kell was raised alongside Rhys Maresh, the rougish heir to a flourishing empire. White London-a place where people fight to control magic, and the magic fights back, draining the city to its very bones. And once upon a time, there was Black London. But no one speaks of that now.

Officially, Kell is the Red Traveler, ambassador of the Maresh empire, carrying the monthly correspondences between the royals of each London. Unofficially, Kell is a smuggler, servicing people willing to pay for even the smallest glimpses of a world they'll never see. It's a defiant hobby with dangerous consequences, which Kell is now seeing firsthand.

Fleeing into Grey London, Kell runs into Delilah Bard, a cut-purse with lofty aspirations. She first robs him, then saves him from a deadly enemy, and finally forces Kell to spirit her to another world for a proper adventure.

Now perilous magic is afoot, and treachery lurks at every turn. To save all of the worlds, they'll first need to stay alive.
Tweet

Magic, murder, intrigue, and fabulous coats
February 23, 2016
Overall rating
5.0
Plot
5.0
Characters
5.0
Writing Style
5.0
As with most high fantasy, A Darker Shade of Magic starts slow and quiet, building a world that is like ours, and not like ours, brick by brick. We meet Kell, a mysterious wanderer in a fabulous coat, who travels between worlds as easily as stepping from one room to another. There is Grey London, which plays like a straight historical fiction of our world, Red London, Kell’s home, which is rich and teeming with magic, and White London, which has been all but burned up by magic and treachery. And then there is Black London, which no one travels to anymore, not even Kell.

The world of each London is established subtly but confidently, and through Kell’s eyes, the rules of each overlapping London gradually become clear and distinct. Once we’ve gained our footing in the magic of Kell’s world and have a sense of the difficulties he faces in each London, we meet Lila, a cunning thief from Grey London with a quick hand and a taste for adventure. It takes a while for all the building blocks of the story to fall into place, but there are plenty of rewards for the patient reader, from the lush details of the worlds to the charming characters to Schwab’s signature poetic prose.

Then, once Lila and Kell inevitably cross paths, the story takes off, plunging both protagonists into a London-jumping whirlpool of courtly intrigue and deception while playing up the conflict between Lila’s lack of magic and Kell’s abundance of it to maximum, satisfying effect.

What V.E. Schwab did so well in Vicious, and what she does again here, is establish each of her characters, from heroes to villains, as fully realized, fleshed-out individuals. While Lila and Kell are both brave and charismatic, they are also criminals, and while the main antagonists – the terrifying sibling rulers of White London – are undeniably sinister, the people they use to carry out their dark deeds are in many ways conflicted and sympathetic. Blurring that line between hero and villain is a tricky game, but Schwab accomplishes it masterfully.

As I said before, the first half of the book may be a slow burn, but it’s a delicious one. Readers shouldn’t expect to plunge straight into adventure and murder and intrigue, but there is plenty to enjoy along the road to chaos. And once the book hits its stride, there are payoffs aplenty as the story builds in intensity all the way through to its twisting, bloody conclusion.

A Darker Shade of Magic will have a sequel, but this first installment ends on a perfectly satisfying note. I can’t wait to join Kell and Lila on their next London-hopping adventure, but I was utterly sated with the ending of this book. There are no cliffhangers here, only the graceful bow of one adventure while another waits in the wings, peeking around the corner.

If you’re in the mood for a refreshingly unique spin on alternate universes, magic, and devastatingly gorgeous coats – or if you just want a beautifully crafted story told in a mesmerizing, lovely, and occasionally creepy voice, then you should move A Darker Shade of Magic to the top of your list.

I love this series! SO SO MUCH! There are so many instances of foreshadowing that made me squeal with absolute delight!!
I love the characters and Kell/Lila is my ultimate bookish OTP of all time!

One thing I resent this book is the little screentime the Danes were given.

"Rumor had it that a man once spat at her for refusing to wear a dress; she'd cut off his lips."

"The bodies in my floor all trusted someone. Now I walk on them to tea."
*drools*

This entire series is a little treasure, I'd recommend it to anyone!!

Annamaria Top 500 Reviewer 29 reviews
Report this review Comments (0) | Was this review helpful to you? 0 0
Powered by JReviews
How to resolve AdBlock issue?
X

Samantha Randolph, Promotions Manager
"Antonia, wizarding apprentice to Master Betrys, may not be the best at actual magic, but she tries her absolute best..."

Michelle Lynn, Assistant Indie Manager
"This book is a winner the moment a reader lays eyes on that cover--and the title. My niece--who is picky..."
You've Got Dragons!
5.0