A Gathering of Shadows (A Darker Shade of Magic #2) 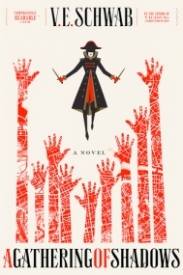 Four months have passed since the shadow stone fell into Kell's possession. Four months since his path crossed with Delilah Bard. Four months since Rhy was wounded and the Dane twins fell, and the stone was cast with Holland's dying body through the rift, and into Black London.

In many ways, things have almost returned to normal, though Rhy is more sober, and Kell is now plagued by his guilt. Restless, and having given up smuggling, Kell is visited by dreams of ominous magical events, waking only to think of Lila, who disappeared from the docks like she always meant to do. As Red London finalizes preparations for the Element Games-an extravagent international competition of magic, meant to entertain and keep healthy the ties between neighboring countries-a certain pirate ship draws closer, carrying old friends back into port.

But while Red London is caught up in the pageantry and thrills of the Games, another London is coming back to life, and those who were thought to be forever gone have returned. After all, a shadow that was gone in the night reappears in the morning, and so it seems Black London has risen again-and so to keep magic's balance, another London must fall.
Tweet

Lush, confident, and wholly immersive
February 23, 2016
Overall rating
4.7
Plot
4.0
Characters
5.0
Writing Style
5.0
A Gathering of Shadows is a different beast from its predecessor, A Darker Shade of Magic. While the first book in V.E. Schwab's excellent fantasy series devoted itself largely to establishing the rules of its multiple (and occasionally magical) Londons, introducing its characters, and then throwing them all into tumultuous conflict, the second takes its time luxuriating in the world so meticulously crafted in the first book. It is lighter on conflict, heavier on character development, and chock full of fun. Which may seem an odd thing to say about the sequel to a story that started with so much darkness, but just trust me. Or better yet, trust V.E. Schwab, whose gift for beautiful prose and attention to detail is evident on every page.

Whereas Darker Shade divided its time rather evenly between three of the four Londons, Gathering takes place primarily in Red London, where we spend most of the story swept up in the Essen Tasch (Element Games), a magical tournament pitting the best magicians of each kingdom against one another. Unlike Darker Shade, which follows Kell for the first few chapters, Gathering opens with Lila Bard, whom we last saw dropping anchor in a world that is not her own. We quickly learn that Lila has spent the past several months acquainting herself with the magic and customs of Red London, and has made a place for herself aboard a grand ship, the Night Spire, and endeared herself to its captain, Alucard Emery.

Through Alucard (a delightful and charismatic addition to the cast of characters), Lila learns of the Essen Tasch, and in true Delilah Bard fashion, decides she must enter. Only a few obstacles stand in her way:

1. The competitors have already been chosen, and she is not among them
2. Her opponents have been training in magic their entire lives
3. Lila has never been trained in magic at all

Of course, for a cross-dressing piracy-aspiring thief like Delilah Bard, these are not actually obstacles at all, but merely challenges to overcome. And if we've learned anything about Lila in Darker Shade, it's that she loves a good challenge.

And then, of course, there is Kell, whose dreams have been haunted by images of Lila ever since they said farewell. Kell's relationship with his foster brother, Prince Rhy, changed dramatically at the end of Darker Shade, and as a result, in Gathering we find him still adjusting to both his responsibility to his brother and his role in court.

Without the need to set up the rules of the world anymore, there is more room to explore the people within it. As the Essen Tasch gets underway, we see Kell and Lila, and magic itself, in a way we haven't ever seen them before. With the delightful and thrilling setting of the competition acting as a backdrop, Gathering delves deeper into its two lead characters, and takes its time in bringing them back together, making the reader yearn for their eventual and inevitable reintroduction. Rhy plays a larger role this time around, as he struggles to come to terms to what happened to him in the previous book while striving to be the prince, son, and brother his family expects, and Alucard brings a refreshing wit and edge to the story, throwing a wrench into the inner workings of all three main characters.

And then beneath, in notes so sparse it's easy to forget they're there, lies the menace of Black London. While readers relax into the spectacle of the Essen Tasch, and the interactions of Gathering's colorful cast of characters, both old and new, Black London simmers underneath, reminding us that this is, indeed, a V.E. Schwab book, where nothing can ever stay light and happy for long.

As Gathering reaches its boiling point, readers may start to panic, wondering how the story can possibly wrap up in the number of pages left. And, well...it doesn't. As most early readers have noted, Gathering ends on a whopper of a cliffhanger, and even if you're prepared for not everything to resolve in this book (this is, after all, a trilogy), it's a shock to hit that last page and abruptly realize there is no more. But just because it doesn't have a neat and tidy ending doesn't mean there isn't plenty to love in this book. From the deeper exploration of the characters to the thrill of the Essen Tasch to the quiet ramping up of Black London, A Gathering of Shadows adds layers and richness to all the things I loved about A Darker Shade of Magic, then throws in a few more for good measure. If you enjoy exquisitely imagined and beautifully written dark historical fantasy, I highly recommend this lush, confident, and wholly immersive series.