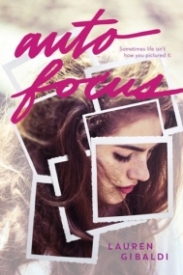 Family. It’s always been a loaded word for Maude. And when she is given a senior photography assignment—to create a portfolio that shows the meaning of family—she doesn’t quite know where to begin. But she knows one thing: without the story of her birth mother, who died when Maude was born, her project will be incomplete. So Maude decides to visit her best friend, Treena, at college in Tallahassee, Florida, where Maude’s birth mother once lived. But when Maude arrives, she quickly discovers that Treena has changed. With a new boyfriend and a packed social calendar, Treena doesn’t seem to have time for Maude—or helping Maude in her search. Enter Bennett, a cute guy who lives in Treena’s dorm. He understands Maude’s need to find her mother. And as Bennett helps Maude in her search, she starts to find that her mother’s past doesn’t have to define her own future. Lauren Gibaldi has crafted a beautiful and timely coming-of-age story that poses the question: Is who we are determined at birth, or can we change as we grow?

A Heartfelt Journey of Self-Discovery and Growth
June 11, 2016
Overall rating
4.0
Plot
3.0
Characters
5.0
Writing Style
4.0
Autofocus is an engaging, quick read about searching for closure and truth, finding love, and growing up. Through disappointment, broken hearts, and rough patches, we are taken on a journey of change and growth that feels realistic and honest.

I requested this book because I figured I should read more contemporary, and maybe even take a little break from fantasy. I wasn't overly hopeful that I would like it, but I was interested enough to give it a try. And I am so glad that I did! This book kept me flipping through pages all day long, eager to find out about Maude's mother and the people she hung out with. Each new lead in finding out about her mother was mysterious and gave Maude so much hope that you couldn't help but feel for her. I loved reading about her journey, and I especially love that finding about her birth mother was the main plot line in the book, and that adoption is a strong point, instead of it being hinted at but never really explored.

Maude is a strong, realistic character. She was adopted into a loving family, and she's very lucky for that, but she can't help but wonder about her birth mother. She's tried to find out about her before, unsuccessfully, and now she's ready to try again and go all out. Through all the pain and disappointment, and having the image of her birth mother shattered, she stands tall and accepts the fact that she may never really know how much she's like her mother, or how much they differ. Along with that pain and adventure, her best friend keeps ditching her and acting different. Treena has a boyfriend now and she's so afraid she isn't good enough for him that she goes along with everything he says, and Maude feels left behind, betrayed. She's left on her adventure alone, without the support of her best friend, yet she still makes it through, especially once Bennett offers to help. She cries and she acts out, but that's normal behavior after all she's gone through and found out. This really makes her a realistic, likeable character.

Bennett has seen kids be adopted, but he's never really seen the other side, the journey of finding their birth parents. So when he finds out that's what Maude is doing, he jumps at the chance to help and discover that side, and discovers so much more. He is what kept Maude together for so long, I find. He went with her whenever she asked, he held her while she cried, he cheered her up when she was down, and he was there for her when Treena wasn't. Through all that hurt and betrayal she felt, he was there to comfort and support her. I love them together!

Treena was trying too hard to be someone else, and while change is inevitable, she threw herself at Trey and was so insecure that she did everything he wanted so she wouldn't lose him. She was a good friend to Maude, when she wasn't with Trey. Whenever she was with Trey she was usually ditching Maude, and then getting mad at Maude when she saw her and Bennett having fun. She didn't go with Maude on any of her little adventures to find out about her mother until the very end. It was real and raw, and things like this happen so much in real life that it gives the story an honest feel. So while I got annoyed by Treena's lack of loyalty a time or two, I also appreciated it, especially since it let Maude and Bennett get to know each other more.

This is a heartfelt journey about self discovery and growth. It's a beautifully written tale that gives you hope, even when it breaks your heart. The strength alone of the characters will stick with you because they inspire you. Autofocus is a beautifully written coming-of-age story that will warm and inspire you. This is not one you want to miss!