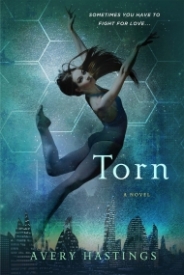 From author Avery Hastings comes Torn, the heart-pounding conclusion to the Feuds Series. Determined to escape from TOR-N, a corrupt Narxis research center, Davis meets another recovered patient, Mercer, whose sweet smile and quirky sense of humor give her hope in humanity again-and a way out. As they make a perilous journey seeking clues that could lead to a cure, Davis and Mercer's friendship begins to evolve into something more... but she's still struggling to let go of her feelings for Cole, whom she believes is dead. Meanwhile, Cole has plans to change his identity in order to compete in the Olympiads-where Imps have now been invited to compete against Priors. He begins training with Mari, the intense and rebellious daughter of a retired fighter, but through trials and tests that are both exhausting and exhilarating, he finds himself in over his head-literally. Will both Davis and Cole have the strength to resist temptation? Will they have the courage to face the answers they seeking? Will their love survive across the divide?
Tweet

An interesting and fun twist on a possible future
October 04, 2015
Overall rating
3.7
Plot
4.0
Characters
3.0
Writing Style
4.0
In the distant future, the world’s population is divided into two groups: the Genetics and the Imperfects. The Gens, also called Priors, are the elite class of civilians, genetically enhanced to be the embodiment of perfection. The Imperfects, or Imps, are not. But no matter how the government separates the two groups, there is one thing bringing them together. Narxis, a deadly disease, has taken hold of the populations and doesn’t care if you’re an Imp or a Prior.

Once Davis becomes infected with Narxis, she’s shipped off to TOR-N, a research facility geared to find a cure for Narxis. Or are they? The goals at TOR-N get cloudy as Davis uncovers embezzlement schemes and the complete disregard for human life, or the dead. There’s also the matter of her illness. It’s improving. That’s never happened before. Along with her pal, Mercer, whom is also improving in health, Davis fights to get off the island of TOR-N and find a way to cure all those suffering from Narxis.

On the other side, Cole has a plan. Sure, Davis thinks he’s dead, but he has a plan to not only help his family who’s struggling with his death, but also get Davis out of the corrupt TOR-N facility. The Olympiads are coming. And this time, Imps are allowed to compete along with the Priors. If Cole wins, he will get his hands on enough cash to fix all of his problems. There’s just one issue; he’s been out of the game so long he couldn’t manage a steady hike uphill, much less an Olympic trial. But who will train an Imp?

The plot behind TORN, the second and final installment of the FEUDS duology, by Avery Hastings is quite enjoyable. As a fan of dystopian novels, I thoroughly enjoy each author’s twist on how they see society succeeding, or failing. Though the idea of a virus infecting the populace is hardly original, I liked how Hastings used the blatant avoidance of the upper-class Priors as the patsy. It pokes a major jab at society as a whole and the common thought of “if I ignore it, it will go away” or the more poplar “it’s not my problem, so I don’t have to fix it” mentality.

Hastings also has a great, easy to follow writing style that gives TORN a fantastic fast pace. I never found a moment where things dragged too much or scenes that were too choppy, leaving us with more questions than we were comfortable with. There were also a couple of plot twists involved that I honestly didn’t see coming, plus one major bomb for Davis that was truly heartbreaking.

Davis, our heroine, is a wonderfully likeable character. She’s a Prior from a prominent family and has a solid future in dance. Until she got sick, that is. And though we find her sort of broken at the beginning of TORN, she still maintains this quiet strength about her that is not only believable, but relatable for the young adult crowd and beyond. It’s the quiet strength that hooked me to Davis. She’s not full of chip-on-her-shoulder badassery, she’s just a girl trying to find her way home so she can help those she loves. That’s it. She’s not perfect, though she was intended to be, and she knows it. She makes mistakes, trusts the wrong people, and follows her heart when she should follow her head, but that’s what I like about her. She’s real.

The only thing that left me with a sour taste in my mouth was Cole. He seems a great guy, but I found his character to be inconsistent. One minute he’s very soft and emotionally charged, and the next he’s a raging jerk when he learns a GIRL is going to teach him to fight. I’m a HUGE sucker for a male POV, but Cole didn’t feel like a guy most of the time. Not all YA boys need to be cocky jerks, I get that, and I appreciate the quiet, realistic guys as well. I’m just suspect of any 17 year old boy who can describe, in detail, the cut of a girl’s dress and willing be the FIRST to hold a newborn infant. Perhaps it’s just me.

Aside from that, TORN is an enjoyable read. I loved following Davis on her journey. I cheered when she started to dance again. I rooted for her as she tried to get over Cole’s death and allowed herself to care for another boy. My heart broke with hers after each betrayal, some truly horrible.

Hastings takes on the moral code of humans and how destroying our environment will only cause our own destruction in a very non-preachy way. The undertones are certainly there in TORN, and I admire the way she plays it out. Sure, TORN is a futuristic fiction novel. But a very possible future.