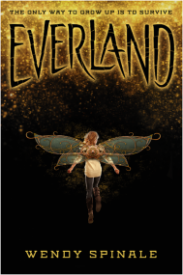 London has been destroyed in a blitz of bombs and disease. The only ones who have survived are children, among them Gwen Darling and her siblings, Joanna and Mikey. They spend their nights scavenging and their days avoiding the ruthless Marauders -- the German army led by Captain Hanz Otto Oswald Kretschmer. Unsure if the virus has spread past England's borders but desperate to leave, Captain Hook hunts for a cure, which he thinks can be found in one of the survivors. He and his Marauders stalk the streets snatching children for experimentation. None ever return. Until the day they grab Joanna. As Gwen sets out to save her, she meets a daredevil boy named Pete. Pete offers the assistance of his gang of Lost Boys and the fierce sharpshooter Bella, who have all been living in a city hidden underground. But in a place where help has a steep price and every promise is bound by blood, it will cost Gwen. And are she, Pete, the Lost Boys, and Bella enough to outsmart Captain Hook?

A fun twist on a classic hero tale
May 04, 2016
Overall rating
4.3
Plot
5.0
Characters
4.0
Writing Style
4.0
The Germans have invaded England, laying waste to London. Bombs took out the prominent bio research sectors and released a deadly virus into the air. Adults fell victim to the virus immediately. Children have been spared. For the most part. Gwen knows her little sister needs help. The infection is already visible on her fingers. So, when a team of Marauders, the evil Captain’s henchmen network, captures Joanna, Gwen knows time is not on her side. She must get her back. But how will she manage while still caring for her youngest sibling, Mikey? And will she have the nerve to defy the cruel Captain Hook?

Fairytale reimagining’s have become a super-hot ticket these days. EVERLAND by Wendy Spinale is no exception. She weaves together a wonderfully unique twist to the story of Peter Pan as she combines a slight historical flair with a healthy dose of steampunk. Steampunk Peter Pan, you say? Why, yes. And it’s fabulous.

When I read a retelling or a story inspired by something already written, my biggest concern is if the story will be unique on its own. I don’t want it to be another of the same thing. It should be a complete story holding up on its own merit. EVERLAND does this. It is truly inspired by the tale of Peter Pan without retelling it in the same way. In it you will find our brave heroine who cares deeply for her siblings, the confident hero and leader of those who’ve been orphaned, the colorful Lost Boys, a spunky sprite of a girl, and a misguided villain who will stop at nothing to end our hero.

The detail is where EVERLAND sets itself apart from other retellings. A flesh-eating virus that wipes out the adult population, steam-powered clockwork wings that keep a small girl alight, tinkering boys who roam a city lost beneath the rubble of London, a distraught villain who wishes to gain the favor of his mother through any means, and a pair of deadly crocodiles that lurk the sewers in search of a fresh kill.

Wendy is a great heroine to follow. She begins the first installment of this journey as a weak girl trying to manage a horrible situation, and not doing a fair job. She skips meals so her younger siblings, Joanna and Mikey can eat, but she’s not very good at the mother role. As a girl herself, Gwen struggles with being a kid and being the person in charge. When Joanna is stolen away, we see Gwen begin to grow. She finds a strength she never knew she had, a cunning nerve, and a drive to set all things right.

Our other point of view character, Captain Hanz Otto Oswald Kretschmer, otherwise dubbed as Hook, is a twisted boy. After suffering the wrath of disappointing his mother, he’s left with one eye and a drive to make her proud, no matter how he manages it. She’s dumped him in this raid on London, and now Hook must make amends for the failure in releasing the virus. His mother will never show him praise if he cannot give her the capture city. If he could get his hands around the neck of the bothersome Pete, he may just have a chance. He knows the cure for the virus lies within one of the children—an Immune—Pete has hidden in his Lost City. Hook’s vileness is tempered by an imprisoned doctor, one of the only surviving adults. In her, Hook finds a mother figure he never had, but strangely craves.

Pete is also a total enjoy in EVERLAND. He doesn’t have his own POV, but he comes through the pages clear enough. He’s not the troublemaking imp of tales, but a strong leader with a knack for causing the Marauders and Hook a great deal of trouble. He takes his role as leader of the Lost Boys seriously, and will do anything to ensure their safety.

From the first page, Wendy Spinale had me wrapped up in the story. The pacing is perfection. The setting is gloriously grimy yet fun, especially when we enter the Lost City. The characters have a delightful banter that speaks of love and trust. The rivalries are believable, some with deep roots.

The only bits that pulled me away from this wonderful story were Hook’s name and the crocs. Maybe I’m too critical, but crocs aren’t native to London or Germany, so I had trouble believing that Hook could have some readily on hand. Perhaps if they were a fancy steam-powered contraption in the shape of a vicious croc, then I could get on board. And Hook’s name felt…convenient. I’m not certain the children buried in the Lost City would have access to Hook’s mouthful of name, or if they’d care enough to make a nickname out of his initials. It seemed like reaching to me. These tiny aspects felt more like the author was trying too hard to remain within the story of Peter Pan.

Nitpicks aside, EVERLAND is a clever twist on a classic tale full of daring heroines, noble heroes, strong family bonds, and a truly devious villain. Gwen grows from a floundering girl to a young woman who knows loving her siblings as a sister—and not a mother—is her greatest strength. Anything is possible if you believe in it enough. Especially if you have a pocketful of golden pixie dust.