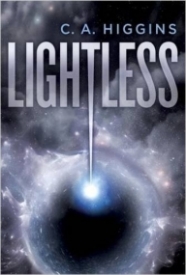 With deeply moving human drama, nail-biting suspense—and bold speculation informed by a degree in physics—C. A. Higgins spins a riveting science fiction debut guaranteed to catapult readers beyond their expectations. Serving aboard the Ananke, an experimental military spacecraft launched by the ruthless organization that rules Earth and its solar system, computer scientist Althea has established an intense emotional bond—not with any of her crewmates, but with the ship’s electronic systems, which speak more deeply to her analytical mind than human feelings do. But when a pair of fugitive terrorists gain access to the Ananke, Althea must draw upon her heart and soul for the strength to defend her beloved ship. While one of the saboteurs remains at large somewhere on board, his captured partner—the enigmatic Ivan—may prove to be more dangerous. The perversely fascinating criminal whose silver tongue is his most effective weapon has long evaded the authorities’ most relentless surveillance—and kept the truth about his methods and motives well hidden. As the ship’s systems begin to malfunction and the claustrophobic atmosphere is increasingly poisoned by distrust and suspicion, it falls to Althea to penetrate the prisoner’s layers of intrigue and deception before all is lost. But when the true nature of Ivan’s mission is exposed, it will change Althea forever—if it doesn’t kill her first.

More Psych Mystery Than Sci-Fi
September 30, 2015 (Updated: September 30, 2015)
Overall rating
3.0
Plot
3.0
Characters
3.0
Writing Style
3.0
DISCLAIMER: This book does not technically contain characters of a Young Adult age (unless one counts the relative maturity state of a certain artificial intelligence.) The hope was that there could be some crossover appeal, but that is for the individual reader to decide.

While this is indeed a sci-fi, it’s a specific type of speculative fiction. The book is best described as a “locked in spaceship” mystery. The cast of characters is small—the entire story isolated to a single (albeit massive) ship and centered around its skeleton crew of 3 plus a captured fugitive and an inquisitor. Our main 3rd-person POV characters are the ship’s engineer/programmer, Althea, the inquisitor, Ida Stays, and with great eventuality, a certain ship’s A.I. program. There is the understanding that humanity has established colonies all over the solar system, but the concept tends more toward the abstract.

The book offers an incredibly accurate depiction of sociopathy, via one of the main point-of-view characters. The thirst for power and control, the focused drive to ‘win’, and the absence of key emotional capacities all ring eerily true from a psychological standpoint. The inhumanity of the trait adds significantly more weight to the antagonist. It also compliments the government she serves—one that can so callously refer to vengeful mass murder as “depopulation.”

The extensive interrogation scenes provided an interesting mode for revealing the mysterious Ivan’s backstory. While there is ever-present suspicion over the accuracy of his tales, his storytelling-under-duress is one of the stronger highlights of the plot. As is the ambiguity over who’s side he may be on. Is he a mercurial rogue out for himself and nothing more, or does he have strategic sympathies with an anti-government movement?

There is an unfortunate excess of people and things with ‘A’ names for readers to keep track of. There’s Ananke, the super secret experimental ship on which the entire story takes place… Althea, the ship’s engineer/programmer and one of our main POV characters… Annwn, the name of the invading mercenary ship… Annie, the name of the Annwn’s spastic A.I. program… and Aletheia, the truth-serum the evil Orwellian central government for some reason hesitates to utilize (in spite of the fact that they have little problem justifying the genocide of entire planetoids as a means of maintaining absolute control over the solar system’s populace.)

Throughout nearly all of this story, Althea comes across as a disappointingly weak character—almost constantly depicted as shaking, frustrated, trembling, crying, or fleeing. This reader may have started out with my hopes for her set too high, but this was almost entirely due to the expectation set up by the ‘Dear Reader’ note (located at the front of the ARC version of this book.) In it, we are told we will watch Althea “transform from a bright but introverted girl into the true heroine of the story, from Firefly’s Kaylee Frye to Alien’s Ripley.” In actuality, Althea doesn’t resemble either of those characters in the slightest at any point in the story—unless the qualifications for this claim don’t extend beyond gender, base job function, and being on a spaceship.

It would have helped tremendously if we would have been shown Althea at some point succeeding and thriving in her element. Instead we find her in a pattern of bafflement and failure from the onset, with no evidence of her alleged competency presented or even suggested until well after page 200—when the Ananke’s captain, Domition, mentions that Althea has been working on the ship’s computer for the last decade. Up until then, this reader had the impression that the ship was recently commissioned. (And perhaps it was, the computer being a separate element not added until a later date. As far as I could tell, this wasn’t ever clarified.)

Sympathizing with Althea and her plight is impeded in several ways, not the least of which was a perplexing lack of backstory. We learn that she is from the Luna colony, but unfortunately, little else ever comes to light. No subtle sprinklings of upbringing, family history, hobbies, formative relationships or traumas that may help explain her motivations, awkwardness, and social ineptitude. Althea had great potential to be a sympathetic character—possibly the only sympathetic character. But that potential wasn’t quite realized. Her maternal attachment to her ship’s computer system was a compelling component, to be sure, but one that would have greatly benefitted from more in-depth justification.

The prose itself showed a lot of potential, a distinct voice and an ambitious scope of imagining. But on the whole, the story itself felt a bit imbalanced—overwritten in some places and underwritten in others. Passive voice and repetition showed up enough to sometimes encumber momentum and pacing. (Example: “Down the hall she walked, down the winding hall, toward the white room.”)

I would recommend this story more for readers who enjoy psychological-based mystery.