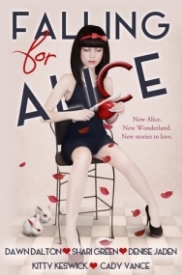 Writing our stories for Falling For Alice was an amazing journey. Below is a short blurb of each of our stories. DRUNK, Dawn Dalton: ALICE is thirsty--and no matter how much she drinks, nothing can satiate her need. But when she meets Lewis, the tall, scary boy with the cat-like hazel eyes, her emotions spiral out of control. Is he the cure to her thirst--or the final catalyst that will send Alice down the rabbit hole of madness? WHITE RABBIT RX, Denise Jaden: In a desperate attempt to lose weight, Alice takes an experimental drug, WHITE RABBIT, which comes with side effects like heightened senses and the chance to see who her true friends are...and are not. WORMHOLE TO WONDERLAND, Kitty Keswick: Alice is one of the elite humans chosen to repopulate a New Earth, traveling to Kepler­-22b a planet six hundred light years from Earth. The Originators blended her DNA with that of famous authors to produce a perfect human, each with a specific job needed to make their new home habitable. Humans are flawed by nature. Alice's creative and curious character isn't something they planned. When flashes of disturbing images clog her memories, Alice is desperate to do anything, to go anywhere, to find the answers...Even if it means losing her mind. ALICE AT WOODSTOCK, Shari Green: Seventeen-year-old Alice's punk band Mad Cat is primed for its inaugural tour, when the other members--including Alice's boyfriend--team up and cut her from the band. Humiliated and raging-mad, Alice stashes her guitar in the back of a closet and retreats from both music and social life. But when she falls down a proverbial rabbit hole, landing in the midst of the largest peace-and-music event in history, Alice must confront the question that's been eating at her all summer: if she isn't a musician, who is she? WONDER IN THE STARS, Cady Vance: When Alice Dodgson's long-term boyfriend, Wyatt, enrolls in the first teen program to spend six months aboard the international space station Wonder, Alice is quick to sign up so she can join him on his epic adventure. But Wyatt breaks up with Alice just after launch, and she's left to navigate this strange new world of zero gravity alone.
Tweet

What worked: This is a fun collection of shorts based on an Alice in Wonderland theme.

Some examples: ALICE AT WOODSTOCK by Shari Green has her Alice part of MAD CAT, a rock group only she gets dumped the day before a tour. Add a mystical album that transports her back to Woodstock and you have a very engaging surreal tale.

WHITE RABBIT RX by Denise Jaden has a pharmacist with an experimental drug called White Rabbit that he prescribes to Alice, who wants to lose weight. Fun twists that also include a high school named Hatter High. Well, Alice, should have known better to trust anyone with a med called White Rabbit to help with losing weight. A true case on being careful for what you wish for!

WORMHOLE TO WONDERLAND by Kitty Keswick is a futuristic twist on Alice in Wonderland with a girl chosen as an embryo to be one of twelve to inhabit a new world. There's a little backstory on the story Alice in Wonderland and then we watch as the futuristic Alice has her falling in a hole while following a white rabbit and being chased by R.E.D. Q.U.E.E.N. Lots of fun twists and turns in this short that brings new magic to an ageless tale.

There's two other shorts in this collection that make this analogy a must read for fans of Alice in Wonderland or those who enjoy twists on classic tales.
Good Points
1. Fun collection of short tales with a twist on the Alice In Wonderland theme.