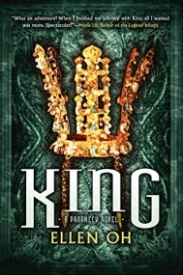 King by Ellen Oh, founder of #WeNeedDiverseBooks, will be loved by fantasy and action fans of Kristin Cashore's Graceling, Tamora Pierce's Tortall novels, and Marie Lu's Legend series! This thrilling and romantic conclusion to the Prophecy series brings Kira her final quest. Girl warrior, demon slayer, tiger spirit of the yellow eyes—Kira is one captivating heroine. Author Marie Lu raved, "After finishing my journey with Kira, all I wanted was more!" Here is the much-anticipated final installment in the Prophecy series! All eyes are on her. Kira, once an outcast in her home village of Hansong, is now the only one with the power to save her kingdom. Kira braves a sea of tigers and battles armies of demons as she learns to trust herself, the romantic feelings for Jaewon that are growing within her, and the destiny that must be hers.
Tweet

A moving journey of heart and strength
June 08, 2015
Overall rating
3.7
Plot
4.0
Characters
4.0
Writing Style
3.0
Action, heartache, and adventure of the epic kind wrap up KING, the final installment of the Prophesy Trilogy by Ellen Oh. KING sets off right where WARRIOR ends. No preamble, no intro, just BOOM, you’re back in the ring with Kira as she tries to get her feet under her for the final leg of her journey. Her brothers are a mess, stressed, and Kwan is trying to recover from being attacked by Furlong, the blue dragon. Taejo and his sidekick, Gom, have been abducted by Furlong and taken to the Tiger’s Nest Temple, doing who knows what to her dear young cousin and future king.

So, basically, everything is not at its best.

As the prophesized Dragon Musado, Kira must journey to Jindo Island in order to save the future king and defeat the blue dragon. Oh, and she must also take on the demon lord and all his minions. Piece of cake! She has the tidal stone, a jewel that gives her the ability to control water, and the jeweled dagger All that’s left to acquire if the dragon belt, and that’s rumored to be hidden away in the monk’s temple. With all three pieces, she will be able to awaken the dragons of the land, but that could potentially destroy everything rather than aid in her cause. She just has to decide which evil is the lesser and on which she has the courage to follow through.

I believe I read somewhere that KING, and the previous books of the Prophesy Trilogy, is based on bits of actual Chinese folklore, which is beyond cool. Some of the imagery in KING is phenomenal. And Ellen Oh does a great job of getting down to the details of East Asian culture--the idiosyncrasies of their beliefs--and putting an epic fantasy spin on it all. The world of KING is colorful and slathered in words that transport you to another world. Chinese wyrms, magic jewels, kumihos, dokkaebi, and horrific battles that straddle the line of honor and evil make KING an enjoyable read.

Kira is my favorite part of KING. She’s been trained since childhood to be a fighter. Having a bunch of older brothers, she had to prove herself. She’s tough and knows how to survive. Kira might not be the easiest person to like, since she’s often all business and little humor, but that’s what I liked about her. She’s relatable, but not in the usual teen way. After you strip away the swords, the bow and arrow, the tiger’s eyes, and the other gear she wears as the Dragon Musado, there is a simple, incredibly self-conscious teen girl. She’s not sure why Jaewon finds her attractive or why she’s been deemed special enough to carry the burden of the Dragon Musado. She questions everything, including (and most importantly) herself.

The romance between Jaewon and Kira is very sweet and subtle. If you want something hot and steamy, this is not your book. The focus is on the adventure and Kira’s journey, but part of that journey is her journey into being a young woman. Jaewon suits Kira. He might have a troubled past, but he’s one of the very few people in Kira’s life who sees the person she is inside. But he doesn’t try to hard to see the real Kira, he just does. And that makes their romance very sweet. They are an equal match.

The only part of KING that left me sort of wanting a bit more was some of the writing style. When it comes to fantasy novels, especially the epic kind, I like to be completely immersed in the story. At times, I felt like I was being spoke to rather than being allowed to experience the world through Kira or Jaewon. Many of the details of the setting were beautiful and I could see them. Other times, I felt cheated as though the author took a quick break and just told me how things were. This is personal preference, of course, and readers who don’t get swept away with the vast descriptions typical of fantasy novels might not find a problem with KING, or the rest of the Prophesy Trilogy.

Also, I wanted to point out this is a GREAT series of books for reader who like to binge out. The Prophesy Trilogy delivers in a wham, bam, binge it man style. If you wait to long between books, you will be lost like the passengers of flight 815. There is no backtracking, no recap. Ellen Oh plows ahead in seamless fashions. So, prepare yourself. Fluff the pillows, fill the camelpack, and grab some munchies. Once you dig in, there is no coming up for air.

In the end, KING is a moving journey to the heart of what gives us strength and honor. Prepare to be swept away with intoxicating Chinese folklore and fights to the very death. The characters are captivating and, in the end, you will want to raise your sword in support of the Dragon Musado as she fights to keep her world safe.

Olivia Farr, Staff Reviewer
"GIVE IT! introduces the simple concept of charity as well as being thoughtful about money purchases. Chummy and his Gran..."

Olivia Farr, Staff Reviewer
"LITTLE SNOWFLAKE is a delightful story that explains the water cycle through the eyes of a small snowflake. Tiny drops..."

Room on the Broom Push-Pull-Slide
5.0

Olivia Farr, Staff Reviewer
"ROOM ON THE BROOM PUSH-PULL-SLIDE is a delightfully interactive board book sure to enchant toddlers and preschoolers. A witch is..."

Olivia Farr, Staff Reviewer
"STANLEY'S FIRE ENGINE is an adorable picture book that follows a day in the life of Stanley the Firefighter. Stanley..."

Olivia Farr, Staff Reviewer
"SHELLY STRUGGLES TO SHINE is a great middle grade read that follows the struggle of individuality and feeling like you..."

Olivia Farr, Staff Reviewer
"THANKS A TON! is filled to the brim with bright colors, rhymes, animals, and gratitude. While an elephant has a..."

Olivia Farr, Staff Reviewer
"WILD WEEK is a cute board book that features an animal on each day of the week, doing something in..."