How to Win at High School 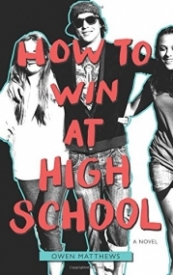 Adam Higgs is a loser, and he's not okay with it. But starting as a junior in a new high school seems like exactly the right time to change things. He brainstorms with his best friend, Brian: What will it take for him to take over Nixon Collegiate? Adam searches for the A-listers' weak spot and strikes gold when he gets queen bee Sara Bryant to pay him for doing her physics homework. One part nerd, two parts badass, Adam ditches his legit job and turns to full-time cheating. His clients? All the Nixon Collegiate gods and goddesses. But soon his homework business becomes a booze business, which becomes a fake ID business. Adam's popularity soars as he unlocks high school achievements left and right, from his first kiss to his first rebound hookup. But something else is haunting him—a dark memory from his past, driving him to keep climbing. What is it? And will he go too far? How to Win at High School's honest picture of high school hierarchy combines with an over-the-top, adrenaline-charged story line, and Adam's rocket ride to the top of the social order (and his subsequent flameout) is by turns bawdy and sweetly emotional.
Tweet

If there was ever a character voice that could reach through the black and white text of the page and palm-heel-strike you to the dome, it’s Adam Higgs. Seriously. How to Win at High School by Owen Matthews has the wickedest voice I’ve read in a long, long while. From page one, Adam jumps off the page and into your head.

But I’m getting ahead of myself.

Adam Higgs is a loser. He’s not that tall, not really all that attractive, and is a total stoner. Adam’s brother was on his way to god status. Hockey powerhouse, good looking, and had it all. Then a bad hit put Adam’s brother in a wheelchair. God status = gone. Adam’s god by association status = also gone. But he’s going to get it back. Somehow.

Then it hits him. Tony Montana style. Scarface. Big Barney Bad Booty Colombian style. Adam is going to take over Nixon Collegiate (super fancy school with the Benz to match). No matter what. Go big or go home.

The problem is, and I say this because I’ve seen Scarface therefore know the ending, it ain’t gonna be easy. But that doesn’t deter our protag. He’s ballin.’ His going big. And he isn’t going home.

From the moment Adam decides his plan of attack-- I mean, Project: Attain God Status, my gut drops and I cover my mouth. That sinking feeling settles in and, in true train wreck fashion, I can’t look away. Even as Adam sinks in deeper within his lies and cover-ups, I keep reading. I have to! Even as Adam makes some of the worst decisions e-v-e-r, I can’t leave him. Why? Because deep down Adam is a good kid. He’s real. He’s just a guy trying to find himself amidst the excrement of the bad hand life dealt him.

There are 371 chapters in How to Win at High School. That’s a lot. But it’s so fast pace you forget. The writing style, told in a verse style (and a little weird at first, if I’m honest), flows so effortlessly, you’re burning through pages to see what completely crazy plan Adam has next. It’s a hefty read clocking in at 513 pages, but as I noted, it’s a great, fast read. Not even Matthew’s disregard for the forth wall (think Ferris Bueller’s Day Off or The Office) slowed me down. And he didn’t just break the forth wall, he kicked it in the chest all King of Sparta style.

How to Win takes place in Detroit suburbia and Matthews does a fantastic job of painting the setting with few details. It left me in awe. And it isn’t so much what is said, but HOW Adam sees everything in his life. From his sub-par computer, to his snot of a sister, to his Wal-Mart clothing, to his dead-beat father, to his brother who doesn’t stop by anymore, and his mom who busts her you-know-what to make ends meet. It’s real. I’ve seen it. And I was right there with Adam.

Let’s talk about character voice for a moment. Voice is what pulls you through the story. It’s what makes you want to cheer for the protagonist. It’s what makes that character real to you as a reader. Adam is very real. He’s lewd, he’s vulgar, he’s obsessed with material things, and he’s obsessed with losing his virginity. Guess what? That’s real. He does have a heart, though, and you see it in Adam’s interactions with Victoria and his brother, Sam. You know he’s a good kid, so you stick with him to see where he goes. You cheer when he wins, you yell at him when he pulls a total jerk move, and you cry when he hits his lows. And cry harder when he knows he’s hit his low.

Speaking of lows, that’s the only thing that really left me wanting more from this bit of awesome. After all the stuff Adam pulls, he kinda gets off easy. Like, really easy. Sure his compass might begin to point true north again, but I would have liked to see Adam get a more eye-opening revelation. In the end, he’s kind of meh. A good meh, but still a meh.

That didn’t stop me from l-o-v-i-n-g How to Win at High School, however. Owen Matthews has a clear voice. It’s dark. It’s troubled. It’s downright raunchy at times. But that’s high school for many teens out there. Adam is easily the kind of kid I went to high school with. He’s a materialistic teen living on the wrong side of the tracks who idolizes a less than noble icon on his journey to find out who he is. In short, Adam is real. How to Win at High School is gritty, it has dark corners containing the declining morale of many urban areas, but it also has a silver lining. Even the darkest of roads have a sliver of light. We only need to choose to see it.