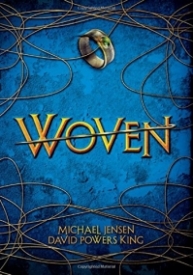 Two unlikely allies must journey across a kingdom in the hopes of thwarting death itself. All his life, Nels has wanted to be a knight of the kingdom of Avërand. Tall and strong, and with a knack for helping those in need, the people of his sleepy little village have even taken to calling him the Knight of Cobblestown. But that was before Nels died, murdered outside his home by a mysterious figure. Now the young hero has awoken as a ghost, invisible to all around him save one person -- his only hope for understanding what happened to him -- the kingdom's heir, Princess Tyra. At first the spoiled royal wants nothing to do with Nels, but as the mystery of his death unravels, the two find themselves linked by a secret, and an enemy who could be hiding behind any face. Nels and Tyra have no choice but to abscond from the castle, charting a hidden world of tangled magic and forlorn phantoms. They must seek out an ancient needle with the power to mend what has been torn, and they have to move fast. Because soon Nels will disappear forever.
Tweet

A fantastic adventure with heart
April 15, 2015
Overall rating
4.0
Plot
4.0
Characters
4.0
Writing Style
4.0
The cover for WOVEN is what initially grabbed me. Between the gold threads, the giant needle, and the gold ring I was intrigued. When I received the review copy and read the blurb, I was hooked. The premise for Woven is incredible and reminds me a bit of the Crewel series by Gennifer Albin. Michael Jensen and David Powers King make weaving looms wickedly cool. Jensen spent years crafting the story behind Woven and it shows. Woven is a beautiful fantasy without the unnecessary fluff often found in epics. My heart resides in fantasy reads, and Woven pulls on those heartstrings.

Woven opens with a prologue told from the POV of an evil man named Kettle. We later discover the true identity of this man, but Kettle’s coldness is a great opener for this story. Then we meet Nels, our main guy. Nels is the perfect protagonist. He’s brave, true of heart, loves his mama, and will stand up for those who cannot stand up for themselves. He takes duty to heart, and dreams of being a knight for the land of Avërand. And he would be a great knight, if only his mother would be straight with him on why she forbids him from seeking out his dreams. Tyra, the princess of Avërand, is our main gal on this journey. She’s spoiled, vain, reluctant to accept her role for her land, and pretty much resents everyone. Naturally, she’s paired with Nels on the most important journey for both of them.

The point of view bounces between multiple parties, mostly told from either Tyra or Nels, but it’s seamless in execution. Not once did I question their voices. Each character has their flair and spice they add to the narrative. Our protags, Nels and Tyra, start on the most horribly awesome rocky foot between her insisting on calling him peasant, and him not giving into her princess-ly demands. As the story progresses, we see each of them begin to mature and grow. Nels discovers what it truly means to be a knight, not just what he believes it to be. Tyra learns what it takes to rule her kingdom like the royal she is inside, rather than the aloof snot persona she wears like a finely stitched mask. When the POV switches to our Big Bad, and we see how he views the world and what he’s willing to do to achieve his goals, the need to bathe is paramount. He’s plain creepy.

Once Woven hit its stride, about a quarter of the way in, I couldn’t put it down. The beginning was a tad slow for me, but it finally hit that sweet unputdownable flow and I itched to get back to it. There was a spot near the first third, where Tyra has an opportunity to save Nels, but it felt a little forced for me. Near the end, I discovered why it’s important, so it didn’t bother me too much. Some places I would have liked to see more of the world and the characters, because they were truly wonderful, but were glossed over as if trying to limit the words. Call me greedy, I just wanted more of this great story and characters. I also wanted a bit more from the ending. The journey finds its resolution, but again, it felt somewhat rushed for me. It also leaves the door wide open for a follow-up, one I would most definitely read.

In the end, I adored the witty banter between Nels and Tyra, cried when their road hit more than one pothole, cheered for them in times of need, and really wanted to punch Arek in the face. All of these things make for a great read and relatable characters who breathe through the pages. Woven is a cut and hem above many fantasies I’ve read. Readers who enjoy stories with honor and heart, like those of Terry Brooks, will love Woven.

Jay Winston Gill
"I learned a lot about parkour and also Islam from this book. I appreciate a book that focuses around a..."

Lillian McCurry, Indie Book Haul Manager & Staff Reviewer
"Future collides with the past in Legacy by Jesikah Sundin, the first book in her series The Biodome Chronicles. Following..."

Caitlin Haines, Indie Assistant Blogger, Staff Reviewer
"I have read many Cinderella retellings in my life. It's a story I have always loved and been drawn to...."

Michelle Lynn, Assistant Indie Manager
"An intriguing world. The story: Maray is an American girl living in Vienna with just..."

Michelle Lynn, Assistant Indie Manager
"An intriguing follow up. The Story: River and Omen were born on the same..."

Caitlin Haines, Indie Assistant Blogger, Staff Reviewer
"This series has blown me away. For those who don't know me, I am low key obsessed with Tangled. And..."

Caitlin Haines, Indie Assistant Blogger, Staff Reviewer
"All right, so I loved Golden Curse, but I LOVED this second book. The story picks..."

Bethany Wicker, Listings Manager & Staff Reviewer
"When a weird light shoots from Brea and strikes her best friend, she's designated as mentally unstable and sent to..."

Vanessa Burton
"I loved writing this book and I hope you all enjoy reading it! "

Olivia
"4.5 stars! An elf haunted by his past, a girl dissatisfied with her monotonous present, a withered king looking..."

Véronique Lam, Staff Reviewer
"Going into this book, I didn’t know what to expect, other than a hella good fantasy story, like all of..."

Samantha Gregory, Staff Reviewer
"Children are disappearing at a camp and coming back confused, with no memory of what happened. Abe, one of the..."

Patrick Hodges, Staff Reviewer
"The story: In a small town in Georgia, Tommy is still mourning the loss of his best..."