The Truth About Us 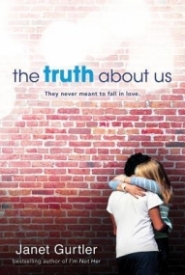 A powerful and gripping contemporary YA from the author of I'm Not Her that's "Just right for fans of Sarah Dessen and Jodi Picoult."-Booklist The truth is that Jess knows she screwed up. She's made mistakes, betrayed her best friend, and now she's paying for it. Her dad is making her spend the whole summer volunteering at the local soup kitchen. The truth is she wishes she was the care-free party-girl everyone thinks she is. She pretends it's all fine. That her "perfect" family is fine. But it's not. And no one notices the lie...until she meets Flynn. He's the only one who really sees her. The only one who listens. The truth is that Jess is falling apart – and no one seems to care. But Flynn is the definition of "the wrong side of the tracks." When Jess's parents look at him they only see the differences-not how much they need each other. They don't get that the person who shouldn't fit in your world... might just be the one to make you feel like you belong.

Another Fantastic Read from Gurtler
March 26, 2015
Overall rating
4.3
Plot
5.0
Characters
4.0
Writing Style
4.0
Janet Gurtler has proven to be a really steady author for me. The Truth About Us was my third of her books that I’ve read. Though I’ve only read her three most recent novels, I do really feel like her writing and characterization is just getting stronger with time. In The Truth About Us, Janet Gurtler once again tackles some heavier topics, but does so in a non-dramatic way that keeps the book feeling pretty fluffy and approachable. With good characters, fantastic arcs, and diversity, The Truth About Us is a delightful contemporary read.

The Truth About Us ventures into some classic forbidden romance territory: the spoiled little rich girl and the boy from the wrong side of the tracks. At first glance, she’s a brat, bitchy and thoughtless. She gets drunk and orders a $10,000 vintage dress. It quickly becomes apparent, however, that there’s much more to Jess than that stuff. Jess’ character arc is really beautiful and naturally done. She essentially spends the book finding herself again and finally dealing with all the things she was partying to forget. Gurtler does this, in my opinion, without shaming drinking or partying specifically; it’s very much about how they made Jess feel.

After ordering the absurdly expensive dress off eBay, Jess’ dad lays down the law: she has to volunteer in a soup kitchen and she can’t use her phone all summer. She is, of course, completely pissed about this and freaked out at the idea of working in a soup kitchen. Pretty quickly, though, she starts bonding with the people there: the employees, yes, but the guests too. Jess really opens up, and you get to see that, while she is rather prickly, she also cares deeply once she gets to know people.

The sweetest relationship of the book isn’t the romance; it’s Jess’ relationship with Wilf, an old man who volunteers at the shelter. Wilf donates money to run a greenhouse, in honor of his late wife who loved plants. Jess has a green thumb that she’s not been watering. They become friends because of the greenhouse, but also because they have such a similar dry sense of humor and an honesty many people find harsh.

Jess’ love interest, Flynn, is a half-Asian hottie. He volunteers at the soup kitchen, but he and his five-year-old brother also eat there some days. Initially, he and Jess don’t get along, despite the frisson of attraction. Quickly, though, they learn to see past their prejudices based on their economic circumstances. Jess has to learn to check her privilege, and Flynn needs to find a way to not hold it against her. What was great about this was that, for the most part, it’s not the super intense forbidden romance that the “boy from the wrong side of the tracks” trope usually results in. Though no one is initially thrilled about their feelings for one another, they are ultimately the largest barrier to their relationship despite that: View Spoiler »

Gurtler doesn’t dive all that heavily into the circumstances with Jess’ family, but I really liked the treatment she gave them. Jess’ mom doesn’t get out of bed most days, because View Spoiler »she hasn’t been able to recover from being viciously beaten while out joggingView Spoiler ». The dad and Jess’ sister Allie both distance themselves from the problems in the house, since they don’t know how to deal. Jess, meanwhile, was acting out in a desperate bid for attention. I liked that the circumstances sort of forced Jess’ mom to face up to her problems, but that she still went to seek counseling and really work on things; love alone, be it romantic or parental, does not solve psychological issues.

The Truth About Us is another fantastic novel from Janet Gurtler. This reminds me how much I need to check out her backlist.