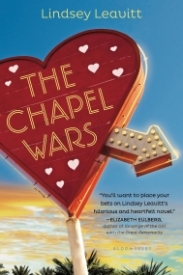 Sixteen-year-old Holly wants to remember her Grandpa forever, but she’d rather forget what he left her in his will: his wedding chapel on the Las Vegas strip. Whatever happened to gold watches, savings bonds, or some normal inheritance? And then there's Grandpa's letter. Not only is Holly running the business with her recently divorced parents, but she needs to make some serious money—fast. Grandpa also insists Holly reach out to Dax, the grandson of her family's mortal enemy and owner of the cheesy chapel next door. No matter how cute Dax is, Holly needs to stay focused: on her group of guy friends, her disjointed family, work, school and... Dax. No wait, not Dax. Holly’s chapel represents everything she’s ever loved in her past. Dax might be everything she could ever love in the future. But as for right now, there's a wedding chapel to save.
Tweet

Dahlia Adler, Recing ball and author extraordinaire (Behind the Scenes/Last Will and Testament/Under the Lights), wins again. She told me over and over to read The Chapel Wars. I wasn’t sure, not having heard all that much buzz about Leavitt’s books. The time came, though, when I had to read this book, mostly because I checked it out of the library and then proceeded to rack up $1.20 in fines (oops), so obviously I had to at least read it now that I was paying money for it. Yes, I know that I am marvelous at life. Enough about that. The short version is that The Chapel Wars turned out to be quite fantastic.

The Chapel Wars took a bit of time to grab me, I’ll admit. The voice is unique, but not in a way that jumped off the page for me. This did result in a lack of emotional connection, but, by the end, I loved this book in a very intellectual way. I can’t really explain why I wasn’t feeling all the feels; it seems as though I should have been. Part of my struggle at the start was that Holly has a few really odd descriptions, which I can’t help not sharing so here you go:

"If looks were America and ugly was Los Angeles, this boy was comfortably Kentucky. West Virginia when he smiled."

Seriously? What does that even mean? Also, poor LA.

“'If hate were a person, we’d be second cousins.'”

I’m amused, but also a bit confused again. Holly doesn’t do this stuff often, but it really stood out to me as strange since she’s of a more mathematical mind most of the time. I did really love her thing with counting and her mathematical predictions of marriages’ success.

The Chapel Wars takes place in Las Vegas, but in a way that was totally new to me. The book is both very Vegas-focused and not at all like I expected something set in Vegas to be. I’ve never been and don’t have much interest in going, since the casinos and shit I’ve seen in the movies don’t really interest me. In this case, though, Vegas is Holly’s hometown. For her, it’s not casinos and “what happens in Vegas stays in Vegas.” There are some ways in which it’s very much not any other place, but it’s also a much more beautiful portrayal than I’ve ever seen. Holly’s attempts to make Dax love Vegas made me want to visit it too. Ironically, Leavitt’s fiction made a real place seem less fictional to me.

The book opens on the funeral for Holly’s beloved Grandpa Jim. When his will is read, everyone’s stunned by the revelation that he’s left the chapel to Holly to run. Even more shocking is the news that, unless she manages to drum up a whole lot more business, the chapel’s going to be closing for good. This, too, is very unique YA novel territory, but I love the way it was handled.

Holly may not have the experience of an adult, but she brings an open-mindedness to bear that none of the adults would have. I also love that The Chapel Wars delves into whether this is a good thing for Holly or not. Yes, Holly seems to be good at it, and she does love the chapel. However, that doesn’t mean that setting herself up to do nothing but this without considering other options is a good thing. It could have just been a quirky story about how she got to run a chapel, but The Chapel Wars gets into real consideration of the future. The way things resolved was also perfect.

At first, I thought Holly was going to be one of those girl-hating heroines. She’s friends with a bunch of jocks and doesn’t always have the nicest thoughts about her best friend’s girlfriend, Camille. Holly doesn’t really now how to be a girl and doesn’t feel all that comfortable around them. As the book goes on, though, Holly and Camille become good friends, and it ends up being really positive all around.

What I love super duper the most about The Chapel Wars is the ways that the romance defies traditional gender roles. It’s not just Holly and Dax either. Sam and Camille’s relationship also doesn’t subscribe. In both cases, the guy is more romantic, more focused on commitment, and more emotional. The issues that Holly has with understanding and expressing emotion are the sort of thing that I almost never see women deal with in pop culture. I love love love every bit of this.

“'Look, Dax. I love that you are super in touch with your emotions and can share all these things with me. I’m serious. It’s great. But I’m not like that. I wish I was.'”

While I definitely do ship Dax and Holly, they never reached that epic shipping level. I really should have been intensely into the ship, because they do exchange some most excellent banter. It’s also really nice that Dax and Holly actually get time to be a couple. The romance feels way more rooted in real life than most novel romances do. They meet, they date, they DTR, and they have to work through normal couple issues.

Friends who seek out the banterfluff, hie thee to thy local book procurement place and seek out The Chapel Wars. I don’t know why I went all Shakespearean. Bono or Elvis would have been more apt, but oh well.

Samantha Randolph, Promotions Manager
"Top 3 reasons to read LIKE SISTERS ON THE HOMEFRONT: 1.) The characters- Gayle, a NYC girl sent to..."

Daphne and Velma: The Vanishing Girl
3.7

Samantha Randolph, Promotions Manager
"Felix has never been in love, but he wants to be. He wants the experience of opening your heart, having..."

Samantha Randolph, Promotions Manager
"Eileen, Claire, and Murphy Sullivan used to be close. They had their special traditions, their shared laughs, and their shared..."

The Summer of Impossibilities
3.7

Olivia Farr, Staff Reviewer
"THE SUMMER OF IMPOSSIBILITIES is a YA contemporary about friendship in the vein of THE SISTERHOOD OF THE TRAVELING PANTS...."

Tarnished Are the Stars
4.3

Stephanie Augustine, Staff Reviewer
"FEEDBACK I actually really enjoyed this story. The beginning was a little confusing because there wasn’t too much explanation of..."

Kim Baccellia, Staff Reviewer
"San Solano, Texas is not only known for its Southern charm but also gruesome murders that took place fifty..."