Chasing Before (The Memory Chronicles #2) 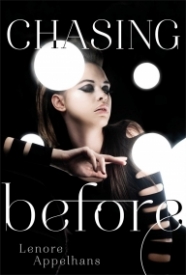 Perfect for fans of The Matrix and Inception, Chasing Before follows Felicia as she grapples with a futuristic afterlife in this riveting sequel to The Memory of After. It’s been four months since Felicia saved Level 2 from the Morati, the corrupted angels who trapped her and her boyfriend, Neil, in the afterlife. Now, she and Neil are finally ready to move on to the mysterious Level 3, an afterlife training facility where humans pick a career to pursue until they supposedly retire to the next level. Shortly after arriving, Felicia learns some shocking truths about her life that make her question everything. Neil wants to focus on the future, but Felicia insists on looking for answers about her past. Just when Felicia thinks things can’t get any more complicated, deadly explosions begin to rock Level 3, and Julian—her charming former love who might still be aligned with the Morati—reappears. Felicia has a choice: Will she do everything in her power to expose the Morati and end the destruction of Level 3, even if it means never knowing who she really is? Or will she chase after the desires of her heart and risk losing her past humanity, her present afterlife, and a future with Neil?
Tweet

Satisfying and Action-Packed Sequel
August 25, 2014
Overall rating
4.0
Plot
4.0
Characters
4.0
Writing Style
4.0
What I Liked:
First things first, you should know that Lenore is one of my besties. I know some people make the decision not to officially review books by author friends because of conflict of interest and I totally respect that. Personally, though, I still want to be able to talk about the books I read honestly, so that’s what I’m going to do. Obviously, I love Lenore, but I’m going to endeavor to leave that aside here and share my opinions. If you have a problem with that, then *waves*. Anyway, if you enjoyed Level 2/The Memory of After, I think you’ll be pleased with Chasing Before.


You know, when it was revealed, I wasn’t the biggest fan of this cover. It seemed a bit more glamorous than seemed right for a book that’s not about fashionable evil masterminds. Not that Felicia doesn’t like to look good, but she generally has more on her mind than clothing. Now, though, I’m actually really pleased with how well the cover matches the book. I mean, Felicia spends much of the book wearing black, both clothing and heavy eyeliner. Plus, the dark background references her struggle with the darker sides of her personality and she’s reaching out for the orb, which is totally plot relevant, with two fingers and away with two, knowing she probably shouldn’t. Basically, it’s kind of perfect, minus how one eye is closed and the other a little bit open which creeps me out tbh.

Like Level 2/The Memory of After, Chasing Before splits between the afterlife and memories of being alive. However, if you’re not as big of a fan of flashbacks, there’s a bit less of that now. In Level 3, there’s a focus on moving on with your afterlife. Level 2 was very reflective and, ideally, meant to help people say goodbye to their earthly life before ascending to the next level. In Level 3, there’s a whole world with occupations and all of that.

I really love Lenore’s conception of the afterlife, full of such mystery and promise. She draws on various sources to pull things together. If anything, it’s most similar to Dante, I’d say, with the various levels. Though many of the characters are Christian and there are angels, it’s not comparable to any Christian conceptions of heaven. There are also references to other mythologies, like muse being a profession, hearkening to Greek mythology. It’s very cool and imaginative. I love afterlife fiction and I love learning the rules of each level.

Chasing Before is a real page-turner. Explosions and secrets and fighting abound. I was propelled forward quickly, curious to find out what would happen next. There’s a constant sense of menace with the ever-plotting Morati. Plus, I end up sort of torn between wanting Felicia to accomplish her goals and between wanting her to die so I can find out what Level 4 is like… Sorry, Felicia, but I’d really like to know.

What Left Me Wanting More:
From the character side, I am simultaneously in love and frustrated. See, it’s really cool that Felicia’s hooked up with Neil now and we get to meet the guy in all the memories. It’s also awesome that we see how skewed Felicia’s memories of him are. It’s less cool that I have to watch Felicia obsess over such an insufferable, sanctimonious prat. I do think it’s neat that these two obviously (to me anyway) are going to be incompatible ultimately, but that there’s still a connection there that needs to run its course.

Why are they incompatible? Well, Neil is Mr. Selfless and holier-than-thou. Felicia’s one of the most selfish heroines I’ve read, which will probably annoy some people but which I love. Both of them really just want the other person to be something other than what they actually are. They’re in love with an idea, not the actuality. Though their lives may be over, they’re still young and have lots of learning to do. Oh, and I do love the fact that it’s Felicia who’s the aggressor in their physical relationship and Neil who isn’t ready, even if he annoys me.

What I would like to see more of is Autumn, even though I’m not a big fan of her. I think there’s a lot of emotion to be mined there and a lot of things Felicia needed to work through. I don’t think she put the effort towards her relationship with Autumn that she maybe should have, though should is a strange word. The way their story plays out doesn’t ring quite right to me, though I can’t put a precise finger on why.

The Final Verdict:
Lenore Appelhans’ Memory Chronicles are a perfect choice for anyone who likes to imagine the limitless possibilities of a life beyond this one. Chasing Before is fast-paced and almost new adult in its consideration of employment and trying to maintain a mature relationship.