The Fourth Wish (The Art of Wishing #2) 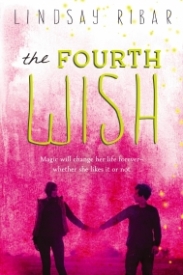 Here's what Margo McKenna knows about genies: She's seen Aladdin more times than she can count; she's found a magic genie ring and made her three allotted wishes; she's even fallen head over heels in love with Oliver, the cute genie whose life she saved by fighting off another genie. But none of this prepared her for the shock of becoming a genie herself. Everything Margo's taken for granted--graduating high school, going to college, hating math, performing in the school musical, even being a girl--is in question. Just at a time when she's trying to figure out who she wants to be, Margo is forced to become whomever her master wants. But Margo is also coming into a power she never imagined she'd have. How will she reconcile the two? And where will she and Oliver stand when she's done? Fans of Every Day and Anna and the French Kiss will love this romantic, magical, and surprising conclusion to The Art of Wishing.
Tweet

Different in Tone, but Just as Fabulous
August 21, 2014
Overall rating
4.3
Plot
3.0
Characters
5.0
Writing Style
5.0
What I Liked
The Fourth Wish is a delightful, norm-smashing, humorous sequel and all people who enjoy a well-placed pop culture reference simply must read this series. There will be some spoilers for The Art of Wishing, so if you haven’t read that yet, just go do that.

The Fourth Wish is not what I was expecting. Usually that’s a bad thing, but it wasn’t here. The Art of Wishing was partly fluffy and partly intense and dark. That might sound unbalanced, but the story really made all of that work. There was a foundation for the turn the plot took, but it’s unexpected in that perfect emotion-punching way. I expected The Fourth Wish to continue with that dark intensity and, if anything, to be darker in mood than The Art of Wishing. That’s not the case. The Fourth Wish actually does something different altogether.

In The Art of Wishing, Margo was dealing with the realization that there’s magic in the world and with her feelings for a genie. It was very much about handling the paranormal aspects while being a human being. Now, though, Margo is paranormal herself and, unlike a lot of YA fiction, Ribar delves into the impact that has on her life. Obviously, this change means that she’s got to do genie work, which is a definite alteration, but it also affects her relationships with other humans and, most importantly, her sense of who she is and what she wants to do. Ribar tackles all of this and makes something fantastical feel very true to life.

In fact, The Fourth Wish ameliorated the only remaining criticism I had of The Art of Wishing, which is that Oliver and Margo enter the “I love you” phase much faster than I’m comfortable with. While they’re still together, it’s not easy. The love declarations obviously were not a way around developing the relationship. For all that Margo felt like she was in love, she’s constantly having to reevaluate their relationship and everything is not sunny. They fight and have to reach compromises.

Even better is the way that being genies impacts their relationship. See, genies change their form every time they get a new master, meaning that both Oliver and Margo change gender throughout the book. Though both can change back to a desired form if they work at it, sometimes they’re not the Margo and Oliver they’re both used to from the first book. For Oliver, this is old hat and no big deal, but Margo has to shift her paradigm that says what a relationship should look like. As with a lot of things, Margo’s not fully embraced the potential of their unique status by the end, but she’s made progress and oh my do I want some steamy fan fiction about these two.

Margo’s character arc is wonderful. She’s very much the same girl she was before, both in good and bad ways. Margo does some seriously frustrating things and sometimes I wanted to shake her. All of it, however, is very Margo and the book is about her gaining awareness of some of her less healthy mental processes. Basically, falling love and becoming a genie in such a short period of time sort of throws her off and she has to sit back and think about her behavior. Margo may be a hard character for some to take, as most characters who push people away seem to be, but she’s trying really hard and learning all the time. Also, I love her for the way she handles her first master; it may not be the classiest way, but I want to give the girl a high five. Plus, it attacks gender norms yet again, which is fabulous.

What Left Me Wanting More:
I wouldn’t say The Fourth Wish is action-packed, but my attention never wandered. There were always things happening, but it was life happening rather than the lives are at stake norm of paranormal fiction. It’s more character-focused than plot-focused, which for me is ideal. The one thing I would have liked to see is some resolution with Margo’s family. They’ve been typically distant for the whole series, neglecting Margo partly through trust but mostly because they’re so wrapped up in love for one another. Throughout the series, they don’t have many moments and Margo never really even starts to deal with her issues there, which felt out of place next to the time Margo spent dealing with everything else important to her (and her mom at least is very important to her).

The Final Verdict:
There’s a special kind of bantery magic in this series and I wish that the people who would love this series will find it. I love both of them and they’re definitely the sort of books I’ll be rereading throughout the years.