Everything Leads to You 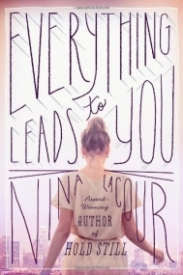 "I want you to do something with the place. Something epic." After being entrusted with her brother's Los Angeles apartment for the summer as a graduation gift, Emi Price isn't sure how to fulfill his one condition: that something great take place there while he's gone. Emi may be a talented young production designer, already beginning to thrive in the competitive film industry, but she still feels like an average teen, floundering when it comes to romance. But when she and her best friend, Charlotte, discover a mysterious letter at the estate sale of a Hollywood film legend, Emi must move beyond the walls of her carefully crafted world to chase down the loose ends of a movie icon’s hidden life, leading her to uncover a decades’ old secret and the potential for something truly epic: love.

Everything Leads to Loving This Book
May 20, 2014
Overall rating
4.7
Plot
5.0
Characters
4.0
Writing Style
5.0
What I Loved:
At its core, Everything Leads to You is a story of happenstance, of coincidence, and the way that it brings people together in ways that seem meant to be. The way I met one of my current best friends is a similarly ideal meetcute, something that worked so perfectly and strangely that it’s almost as though it was destined. I don’t really believe in fate or anything, but it does seem like life (or our own inclinations) sort of pushes us towards certain people and places we need to have in our lives. This feeling is what drives Emi throughout Everything Leads to You. As the title indicates, all of the little things are adding up to get her to this new love.

As the novel opens, Emi’s a bit of a mess romantically, having just been dumped by her on-again/off-again girlfriend for the sixth time. Even so, Emi wants Morgan back badly, despite the wise words of her best friend Charlotte. Desperate for something to take her mind off of her heartbreak, Emi seizes on the mystery of Clyde Jones’ letter. Clyde Jones is essentially John Wayne, and the record Charlotte purchased at the estate sale following his death contained a letter referencing a child, one unknown to anyone. Charlotte and Emi set out to find the daughter and eventually come to a raspy-voiced, gorgeous girl, Ava.

The romance of Everything Leads to You is pretty low-key for the most part. There’s not much swoony stuff or sweet romance. It’s yearning and awkwardness and moments where Emi’s wondering if she made the right choice. It’s being in love with Morgan one day and a new girl the next, but, as Emi admits, falling in love too easily is one of her many flaws. I really loved how the romance followed pretty realistic lines, particularly with the difficulty about knowing when to make a move and whether it’s okay to text and all the stupid little difficulties involved in dating.

Though their role is small, I also want to give a shout out to Emi’s parents, who are super loving and healthy parents. They’re both professors (he of pop culture; she of African American studies), and they’re so supportive of their children. Plus, they’re willing to welcome their daughter’s friends at short notice, and are equal parts wonderful and embarrassing. That’s pretty spot on for parents, I would say. The only thing I didn’t like about Everything Leads to You was Jamal’s little speech where he puts down Emi and her parents for being privileged and having framed pictures of the ghetto on the wall. He has reasons for feeling the way he does, but they were nothing but nice to him, and he’s completely dismissive. Also, it’s a pretty big issue to raise and then not really tackle.

Another other aspect I adored about Everything Leads to You was all the stuff I learned about film. Emi has a job as an intern, thanks to her brother Toby’s connections. She wants to be a production designer, which is a term I’ve read off of movie credits but I actually had no idea what the job entailed. Now, thanks to LaCour, I totally do. Basically, the production designer makes the set happen, coming up with the concept and acquiring the perfect items to make a living space or business or whatever that perfectly fits the scene. I’m super not into that stuff personally, but the way that Emi describes her work is so passionate that I felt every bit as thrilled. That’s one of my favorite aspects of reading, a book truly making me understand another way of being and feeling. I’ll probably be eying the sets when I watch television and films a lot more closely now. Also, it’s wonderful how hard Emi works at her job. She’s not a prodigy and she doesn’t get everything right, but she’s naturally talented and supremely motivated. She’s learning about how to be an adult with a job, which makes Everything Leads to You feel like a real new adult novel.

The Final Verdict:
Everything Leads to You is a must read for those looking for diverse stories. LaCour’s novel is understated, yet cinematic, sort of an indie like the movie they’re making within its pages. I loved it, and definitely need to get to LaCour’s other novels as soon as possible, though, with blogging, that may not be all that soon.