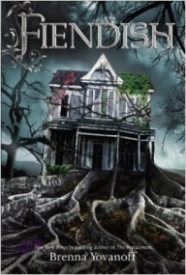 Clementine DeVore spent ten years trapped in a cellar, pinned down by willow roots, silenced and forgotten. Now she’s out and determined to uncover who put her in that cellar and why. When Clementine was a child, dangerous and inexplicable things started happening in New South Bend. The townsfolk blamed the fiendish people out in the Willows and burned their homes to the ground. But magic kept Clementine alive, walled up in the cellar for ten years, until a boy named Fisher sets her free. Back in the world, Clementine sets out to discover what happened all those years ago. But the truth gets muddled in her dangerous attraction to Fisher, the politics of New South Bend, and the Hollow, a fickle and terrifying place that seems increasingly temperamental ever since Clementine reemerged.

Eerie Southern Gothic
August 24, 2014 (Updated: August 24, 2014)
Overall rating
3.7
Plot
4.0
Characters
3.0
Writing Style
4.0
What I Liked:
What’s funny about Fiendish is that I was really tempted to DNF after the first chapter. I was confused and it didn’t make any damn sense. Plus, I’ve been DNFing left and right and that’s been working for me. However, I pushed on a couple of chapters and Fiendish got really good. So basically, I am here to tell you that, even if you find the start really puzzling and off-putting, keep going because it will make sense. If you’re into southern gothic witchy horror, you will not want to miss Yovanoff’s latest.


Yovanoff has an outstanding way with setting a mood. Every bit of her writing and setting comes together into this dreamy, gothic sense that pervades absolutely every bit of the book. It’s enchanting really and helps catch the reader up and make the strange world within convincing. She has a way of making this paranormal story seem magical and completely ordinary all at the same time. The writing itself isn’t particularly complex, but somehow it all comes together perfectly and does just what it needs to do. Gothic writing isn’t generally my thing, but I think Yovanoff does it beautifully here.

Fiendish has a great hook. The first chapter, as I said is confusing, a hodgepodge of strange images and memories all swirled together. After that, though, the heroine, Clementine DeVore, is rescued from a cellar she’s been trapped in for 10 years. How did she survive? Magic. Deal with that, okay. Magic pervades this book and either you like that or you don’t. Clementine was down there in some sort of stasis, occasionally seeing through the eyes of someone else, her own sewn shut, trapped from the age of seven. At this point, I had to know what was going on in this town, even before I was really engaged. This kept me reading.

Which is good, because this book is creepy in such a good way. This town, you see, borders on this magical place called the Hollow and there are witchy people living in the town. There are also normal people who hate the witchy people, most of whom try to hide their craft. The powers are tied to the elements, like dirt, fire, water, air. Down in the hollows, there are helldogs and fiends and magic is so potent. It all has a very organic feel and, damn, is it terrifying when the reckoning comes and the magic spills over.

Also, in case you couldn’t tell from the horror label, but this book is dark dark dark. It’s not the sort of story with an easy resolution. There is pain and things are uncomfortable as all hell. This is not a pretty, fluffy fantasy, nor is it for the faintest of heart. I’m not too easily scared by books, but there were a couple of memorably haunting scenes in this one.

The characters are interesting, which I mean in its true definition not in the one where interesting means awful or boring. Clementine, actually, is probably the least compelling of the set for me. Shiny, her cousin, is sassy, bitchy and fiery. Rae’s the one magical person who seems truly capable of control, even as things fall apart, sort of the Velma of the group. There’s creepy old man Heintz with his horrible zoo and his abused daughter Davenport. The cast is as strange and atmospheric as the magic they wield.

What Left Me Wanting More:
The only thing that left me cold was the romance. Because of reasons, Clementine sort of saw Fisher while she was trapped in the cellar. It’s the paranormal clichés with Fisher being a bad boy and Shiny warning her away, but Clementine is too drawn to him for that. He even tells her to stay away for her own good, but oh no. They’re such cheeseballs and, while they don’t actually claim to be in love because thank kanye the romance isn’t a huge factor most of the time, the whole thing smacks of instalove. I do not ship it and I do not care about their feelings.

The Final Verdict:
Come to fiendish for the dark and creepy, and you shall likely leave satisfied, my friends. It’s fun watching Yovanoff getting better and better at her own craft, and I’m looking forward to what she does next.

Christina Franke, Staff Top 10 Reviewer 678 reviews
Report this review Comments (0) | Was this review helpful to you? 0 0
Haunting
May 17, 2014 (Updated: May 19, 2014)
Overall rating
5.0
Plot
5.0
Characters
5.0
Writing Style
5.0
I was so excited to get this upcoming novel from Brenna Yovanoff. I'm a huge fan of her writing which is hauntingly beautiful with it's own rhythm. It's like poetry in motion. But then again she's part of the mega talented Merry Sisters of Fate which includes fellow YA authors Tessa Gratton and Maggie Stiefvater.

What worked: The voice. What I love so much about Yovanoff's writing is it isn't over the top graphic but subtle. I was hooked right from the very start with the chilling premise--Clementine was buried alive and only after she is 'rescued' does she confront the horrific truth of what happened that night. Horror at it's finest!

I love Yovanoff's writing so much that I will read out loud passages just to feel the rhythm and texture of her words. Her images and world building are lush and powerful. Yovanoff totally spins a spell on readers. I know she did with me.

The whole premise of something wicked happening in a small town and the hypocrisy of the townspeople reminds me so much of a Ray Bradbury story only with much more woven throughout. She also reminds me a bit of Francesca Lia Block, another one of my favorite authors!

Clementine's struggle to find out what happened to her and her mother and why the townies hate her so much is shown in such a way that readers want to find out more about this world. I enjoyed the romance between her and Fisher, the boy that helps her escape. Add to that the other girls with special abilities which includes her cousin Shiny, who has her own secrets. The atmosphere is spooky and creepy but not too graphic, which I love!

Hauntingly beautiful this story casts it's own spell and you can't help but cheer for Clementine. A total must read.