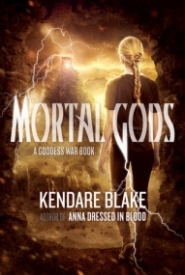 Ares, god of war, is leading the other dying gods into battle. Which is just fine with Athena. She’s ready to wage a war of her own, and she’s never liked him anyway. If Athena is lucky, the winning gods will have their immortality restored. If not, at least she’ll have killed the bloody lot of them, and she and Hermes can die in peace. Cassandra Weaver is a weapon of fate. The girl who kills gods. But all she wants is for the god she loved and lost to return to life. If she can’t have that, then the other gods will burn, starting with his murderer, Aphrodite. The alliance between Cassandra and Athena is fragile. Cassandra suspects Athena lacks the will to truly kill her own family. And Athena fears that Cassandra's hate will get them all killed. The war takes them across the globe, searching for lost gods, old enemies, and Achilles, the greatest warrior the world has ever seen. As the struggle escalates, Athena and Cassandra must find a way to work together. Because if they can’t, fates far worse than death await.
Tweet

Mortal Awesomeness
December 16, 2014
Overall rating
4.0
Plot
4.0
Characters
4.0
Writing Style
4.0
What I Liked:
How much do I love that this series is Goddess War and not God War? This series is boss ass bitches fighting and it’s completely bamf. There are strong men, too, but, across the board, it’s women calling the shots. That does not happen often enough in fiction. All of the main characters are strong, but the women have this fiery determination to keep trying against the odds. They also happen to be the better strategists. Yeah, Odysseus can do strategy, but he also worships at Athena’s alter, so he’s a bit behind her on that. Also, when I say women fighting, I mean war.

Circumstances were bleak in Antigoddess, but things have only gotten worse. The gods continue to die, in their own unique torturous fashion. Athena and her feathers are still the worst, because I cannot even handle those descriptions of them popping out of Athena’s skin. Hermes is wasting away too quickly, despite eating tons of Chinese food and making me very hungry. Ares bleeds from past war wounds, doomed to die from battles he won. Aphrodite goes the way of Hamlet’s Ophelia, losing grasp of her sanity while maintaining her beauty. They’re all fighting, hoping that somehow killing some will save the rest. What makes this especially dark is that there’s really no guarantee that all of this death will grant anyone life, especially since I wouldn’t put it past Blake to end her series with everyone dead.

The role of the humans expands in Mortal Gods. I struggled a bit with the purpose of the reincarnated humans from the Trojan War, but they’re starting to matter. They’re also interesting in how they interact with the world, some entirely devoted to the past and others living mostly in the present. The dynamics between these teens, knowing who they once were but also new people, are so interesting. For example, Andromeda and Hector were married, but Henry thinks that Andie’s his sister’s annoying friend. If the feelings change, is it Andie he likes or Andromeda?

I really like most of the cast, with the exception of Cassandra. She didn’t bother me as much in Mortal Gods, since she wasn’t in a goopy romance with Apollo, who I really don’t want to call Aidan, anymore. Actually, I like Cassandra most when she lets her god-killing rage take her over and becomes a bit evil. Hermes might be my favorite, and I dearly wish for a gay ship for him before the series ends. Athena continues to be her infuriating, stubborn wonderful self, unable to admit to emotions and wanting to focus on practical things like staying alive. The ship between her and Odysseus is immensely frustrating and I really want to shove their faces and bodies together.

Kendare Blake is one of the cruelest YA authors. Seriously, not only does she kill a bunch of characters, but they’re basically all constantly wounded and having every dream crushed. Of course, to cheer you up, there are fun pop culture references peppered throughout. I even spotted one that I do believe is a reference to Blazing Saddles; if it is, Kendare Blake may have my eternal devotion and my money for all future books.

Questions remain, however. As much as I love the female gods running the show, I can’t help wondering where Zeus and Hades are. They’ve been referenced, but apparently have zero interest in this war. Considering that they’re often ranked the top gods, it seems odd for them not to be involved in some way. I’m also curious about the other big names from the Trojan War. This, too, has been raised, but not necessarily addressed. Before this all ends, I would like some explanation for why these specific people returned.

The Final Verdict:
After the dramatic cliffhanger, I need book three. There’s no stopping now. If you enjoyed Antigoddess, Mortal Gods is more bloody awesomeness.