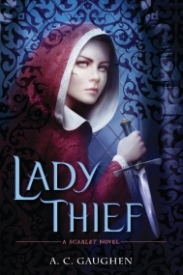 Scarlet’s true identity has been revealed, but her future is uncertain. Her forced marriage to Lord Gisbourne threatens Robin and Scarlet’s love, and as the royal court descends upon Nottingham for the appointment of a new Sheriff, the people of Nottingham hope that Prince John will appoint their beloved Robin Hood. But Prince John has different plans for Nottingham that revolve around a fateful secret from Scarlet’s past even she isn’t yet aware of. Forced to participate at court alongside her ruthless husband, Scarlet must bide her time and act the part of a noblewoman—a worthy sacrifice if it means helping Robin’s cause and a chance at a future with the man she loves. With a fresh line of intrigue and as much passion as ever, the next chapter in Scarlet’s tale will have readers talking once again.

The Lady Thieved My Heart
January 21, 2014
Overall rating
5.0
Plot
5.0
Characters
5.0
Writing Style
5.0
What I Loved (also known as everything):
Normally, I don’t bother borrowing ARCs from people. I mean, I could have waited a month and saved the three bucks each spent shipping this book back and forth. For Lady Thief, I made an exception and accepted Shae’s offer. Dudes, it was one hundred percent worth it. Before I read Lady Thief, I reread Scarlet, which, I have to tell you, is even better the second time. As good as Scarlet is, I do think Lady Thief might be even better, though both are so astounding it’s hard to quantify such things because I am far too busy marveling at Gaughen’s talent and daring.

A.C. Gaughen is officially one of my favorite authors. I’m sure of this after Lady Thief. She’s one of the few authors who will do nasty things to her characters because the plot and circumstances call for it. Gaughen will wreck your emotions, okay? Be ready for that. Lady Thief starts out in a dark place and ends in an even darker one, I’m warning you now. This book is the perfect antidote to all of the HEAs in YA fiction. I admire Gaughen so much for taking this route of darkness and pain.

Now, I know you’re all probably really terrified right now, about how upsetting this book will be, and, on one level you should be. It is that dark and painful. However, it’s also perfection. Basically, every time anything happened, I wanted to go give Gaughen a high five for how amazingly, impeccably devastating it was. She makes the familiar Robin Hood story something new altogether, unpredictable while still fitting the familiar mold.

Of course, Gaughen’s smart, so the book isn’t all darkness. There are happy moments and there is humor. Lady Thief isn’t unrelentingly depressing, because the characters aren’t the sort to mope about or let their circumstances ruin them completely. They are fighters. In the face of enemies and deadends, they find another way. They make the most of the moments of calm and happiness they do have.

As someone who was definitely on the fence about the ship in Scarlet, even on the read through, the romance worked a lot better for me in Lady Thief, and not just because of some changed circumstances regarding the other option. The most important aspect of the romance is the fact that Scar remains herself one hundred percent. Being in love doesn’t change her. She’s not one degree softer than she was. Actually, I think love has made her stronger, more protective and more determined, while also leveling up her ability to care about and understand others.

The rest of the cast remains just as consistently true to who they were in the first book. Rob has an amazing character arc in Lady Thief, both he and Scarlet needing to confront the pain of their past and becoming better, stronger people for that. Much’s role expands and he’s my second favorite character. That kid has the role of dropping truth bombs on people. I am so excited to see how he grows as the series continues. The additional characters, of which there are quite a few, are all fascinating and either lovable or love-to-hate-able.

Scarlet is, without doubt, one of my very favorite heroines. She is intense. She is clever. She is flawed. In Lady Thief, she determines to act like a lady, in exchange for something she wants. Even though she made up her mind to do this, Scar is hilariously bad at acting properly. She cannot sit idly by and listening to people insult her. Though she’s an incredibly smart girl, she acts first and thinks later. In the heat of the moment, she reacts with physical violence and gets herself into trouble, which she later has to think herself out of. I love her so much, for the way that she reacts to everything, particularly to people making claims of ownership over her.

The plot of Lady Thief is just astoundingly good. In talking to my friends who already read this book, half of what I’ve gushed is simply “IT IS SO GOOD.” I cannot emphasize enough how impressed I am with this sequel. If you loved Scarlet, then Lady Thief will make your mind explode with emotions and awe.

The Final Verdict:
Though it’s only January, I feel pretty comfortable saying that Lady Thief will be one of my top favorites for the year. Waiting for the next book in the series will cause me much mental anguish. A.C. Gaughen’s Scarlet series gets the highest of my recommendations.

Kim Baccellia, Staff Reviewer
"Meteor, New Mexico is the site where a meteor crashed years ago. It's also the site of the Miss Meteor..."

In the Study with the Wrench
3.0

Samantha Randolph, Promotions Manager
"After the death of the headmaster and the storm in the first book, Blackbrook Academy is barely functioning. Half the..."