Sons of the Dawn: A Basque Odyssey 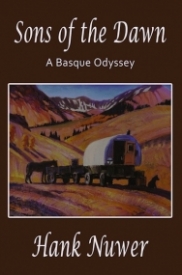 Kirkus Review: Franklin College professor Nuwer (The Hazing Reader, 2004, etc.) breaks from scholarly publications with this debut Western novel set in the Basque region of Spain and the rugged terrain of Idaho. In the years leading up to the Spanish-American War, the Spanish military conscripted thousands of men and boys to fight. Having lived a peaceful life with their adopted father near the Basque city of Guernica, teenage brothers Anton and Nicky are reluctant to acknowledge that the conscription threatens their safety and their lives. Having more foresight, their father arranges their passage to America to work with his half brother on his sheep farm. Once there, they are thrown into a new life, first of rigorous training, then of solitude and loneliness as they spend two years tending the flock on the open range. They meet a community of other Basque workers, as well as immigrants of other nationalities working for a better life. Unfortunately, they also meet with prejudice against the Basques, especially by a local cattle farmer bent on gaining as much land as he can—by any means. Nuwer excels at creating a vivid, atmospheric sense of place, both in Spain and Idaho. His pacing is by no means brisk, but rather than being a detraction, it highlights the introspection and attention to detail throughout the story. The dialogue has a few awkward moments, including humor that occasionally falls flat, as with Nicky’s response to a ribbing: “That was like humor, only not funny.” Also, phrases such as “the wagons rolled west, ever west, without them” seem a bit implausible coming from a seasoned sheep herder. However, readers will likely gloss over these issues in favor of Nuwer’s keen eye for detail and historical accuracy. With its focus on teenage characters and specific exploration of bullying and hazing, this book has considerable appeal not only to fans of Westerns but to young adults as well. Informed, unpretentious and attentive, this Western breathes life into little-known historical events.
Tweet