The Queen's Choice (Heirs of Chrior #1) 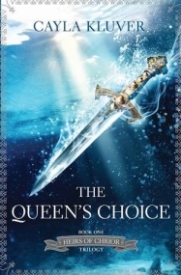 Magic was seeping out of me, black and agonizing. I could see it drifting away. The magic that would let me pass the Road to reach home again.When sixteen-year-old Anya learns that her aunt, Queen of the Faerie Kingdom of Chrior, will soon die, her grief is equalled only by her despair for the future of the kingdom. Her young cousin, Illumina, is unfit to rule, and Anya is determined not to take up the queen's mantle herself.Convinced that the only solution is to find Prince Zabriel, who long ago disappeared into the human realm of Warckum, and persuade him to take up his rightful crown, Anya journeys into the Warckum Territory to bring him home. But her journey is doomed to be more harrowing than she ever could have imagined.

Slow to Start but Worth It in the End
January 02, 2014
Overall rating
3.3
Plot
4.0
Characters
3.0
Writing Style
3.0
What I Liked:
Having really enjoyed Cayla Kluver's Legacy trilogy, I was really curious about The Queen's Choice. Still, I was hesitant. Faeries aren't really my fantasy creature of choice and it sounded like it would be a paranormal romance, which tends to end poorly for me quite often. That The Queen's Choice surprised me is an understatement. This is fantasy, straight up and jam-packed with world building. Kluver's The Queen's Choice takes a long time to find its stride, but the shocking ending has me ready for more.

What Left Me Wanting More:
Guys, I'm not going to lie to you: this book is SLOW. The first sixty pages are pretty engaging, but then from page 60 to somewhere around 350, the book languishes. That's a lot of pages with just world building and writing to sustain the reader. I'm not a world building-driven reader, so, while I like it, if that's ALL that's happening, I'm getting bored. The plot starts out with a bang but then nothing much really happens with it for 300 pages. It's rough to get through and there's a lot that could have been trimmed from this set up or better integrated into the plot.

More Things I Liked:
However, I'm glad I made it through all of that slowness, because, at the end, things get very dark and surprising. Essentially, Kluver's ability to pull the rug out from under me as I read is the common factor in why I've really enjoyed her books. Authors who can do a twist that I'm not expecting and actually like are fairly few. The Queen's Choice has a landscape of characters and motivations that is hard to parse, while being quite well done. Kluver loves to do terrible things to their feelings and, oh, I love that.

Seriously, the world building in this book is boss. I don't think I've ever seen faeries done so intensely and without a romantic focus. The faeries and humans basically share the planet. Ages ago there was this war and the humans won, despite the fact that faeries can fly and connect to nature (they have elemental powers sort of like they're benders from Avatar, but not quite). The faeries, in an effort to save their people, used magic to seal the border to their diminished lands. Humans cannot enter Chrior, the faerie kingdom, because anyone without magic who tries to cross the Bloody Road will die.

Humans and faeries mistrust and hate one another, both believing the other to be lesser. The xenophobia between these cultures is the main theme of the novel. Anyway, in power in both the human kingdom and the faerie one are rulers who want to promote friendship between the two nations. However, the Queen is dying and her son is missing, leaving a niece who hates humans next in line for succession. In both the human world and the faerie world, forces are fighting both for and against unification. It is a time of strife, my friends.

The characters, much like the plot, take a backseat to the world building for a long time. However, by the end, I was pretty interested in what Anya was up to. The scene stealer is definitely the missing Prince Zabriel and the adorable cop, Tom Matlock (this name, though, what is up with it?). Some things that I like about the characterization of The Queen's Choice: first impressions are often deceiving, everyone has complex motivations, and there are a lot of powerful women. Oh, it also had some hints of being sex-positive.

When I think Harlequin, I generally expect that romance will be a factor, but The Queen's Choice falls into the diversification of the Harlequin label. There is some romance in here, but not enough that I would even call it a theme. There are just a couple of scenes and they in no way define anyone. Romance was pretty crucial in the Legacy trilogy, so this is a big departure from what happened before.

The Final Verdict:
The Queen's Choice is fantasy done right, albeit with a LOT of detail. Readers who really appreciate world building will definitely want to check this one out. Patient readers will probably end up finding this one worthwhile, even if world building isn't your favorite aspect of novels.