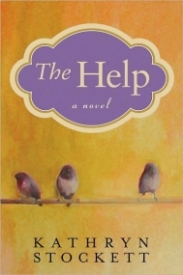 Three ordinary women are about to take one extraordinary step. Twenty-two-year-old Skeeter has just returned home after graduating from Ole Miss. She may have a degree, but it is 1962, Mississippi, and her mother will not be happy till Skeeter has a ring on her finger. Skeeter would normally find solace with her beloved maid Constantine, the woman who raised her, but Constantine has disappeared and no one will tell Skeeter where she has gone. Aibileen is a black maid, a wise, regal woman raising her seventeenth white child. Something has shifted inside her after the loss of her own son, who died while his bosses looked the other way. She is devoted to the little girl she looks after, though she knows both their hearts may be broken. Minny, Aibileen’s best friend, is short, fat, and perhaps the sassiest woman in Mississippi. She can cook like nobody’s business, but she can’t mind her tongue, so she’s lost yet another job. Minny finally finds a position working for someone too new to town to know her reputation. But her new boss has secrets of her own. Seemingly as different from one another as can be, these women will nonetheless come together for a clandestine project that will put them all at risk. And why? Because they are suffocating within the lines that define their town and their times. And sometimes lines are made to be crossed. In pitch-perfect voices, Kathryn Stockett creates three extraordinary women whose determination to start a movement of their own forever changes a town, and the way women—mothers, daughters, caregivers, friends—view one another. A deeply moving novel filled with poignancy, humor, and hope, The Help is a timeless and universal story about the lines we abide by, and the ones we don’t.
Tweet

Overall rating
4.3
Plot
5.0  (1)
Characters
4.0  (1)
Writing Style
4.0  (1)
Already have an account? Log in now or Create an account
The Help
December 27, 2013
Overall rating
4.3
Plot
5.0
Characters
4.0
Writing Style
4.0
Can you imagine a segregation happening between you and your friends because of different ethnicity? Many people don’t know what it’s like, to be degraded by others for having different skin color.
The Help, written by Kathryn Stockett, and published on 2009, reveals extreme racism throughout the story. Having to hear the story from three very different characters’ point of view gets me emotional with all of their happy and sad moments.
Aibileen, a black maid who’s very wise, faithful, and religious spends most of her time taking care of the upper class family. She is the one who takes care of Miss Leefolt’s daughter. Devoted to a white’s daughter, Aibileen takes care of this little girl with generosity, as if it was her very own. Instead of having Miss Leefolt telling her daughter the importance of life, Aibileen tells the little girl, “You is kind. You is smart. You is important.”
Minny is another black maid who can’t stop herself from whatever she wants to say. Although Minny and Aibileen are best friends, Minny is straightforward, brave, and audacious. Having to have a bad habit of never keeping her mouth shut, she has lost many jobs.However, there is one thing she’s really good at and proud of: being a good cook. She’s like the top chef you see in “Hell’s Kitchen,” making perfect food, and never burning any of her dishes.
Miss Skeeter, twenty-two years old, returns home after graduating from Ole Miss, expecting her mother to be proud of her. Instead, her mother expects her to come back with a ring on her finger. In contrary, all Skeeter has ever dreamed of was to become a writer. And this, leads to the very beginning of The Help.
Miss Skeeter decides to write a book about maids in Jacksonville. In order to do so, she asks Aibileen and Minny for help with the book. Although each and every one of them are different in one way or another, they come together and decide to make the book, even if it meant taking risks.
Miss Skeeter needs at least a dozen maids to help her out to finish the novel. After a serious, yet depressing incident, more maids decide to help out with the book, giving Miss Skeeter, Aibileen, and Minny a hope that their plan of publishing it would be worth the consequences.
After being published anonymously, white women start guessing and recognizing themselves in the book. Not only did this give maids hope, but it also has lead Miss Skeeter to a separation between herself and her friends. The separation is due to having different views on racism and future integrity on Jacksonville.
Kathryn Stockett states really clear that the whole point of this novel The Help was to change the lives of others, and to let many people view black people differently. It is to show hope, and joy to those who have been segregated before, not only for black maids, but also for those who’s been left out before. Making changes to how people view things, is like watching magicians doing their magic tricks and audiences getting mind blown.
As one of my auntie once said, “Sometimes good things fall apart so better things can get together.”

Angela Top 1000 Reviewer 2 reviews
Report this review Comments (0) | Was this review helpful to you? 0 0
Powered by JReviews
How to resolve AdBlock issue?
X