The Impossible Knife Of Memory 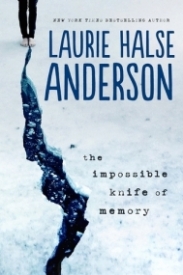 For the past five years, Hayley Kincaid and her father, Andy, have been on the road, never staying long in one place as he struggles to escape the demons that have tortured him since his return from Iraq. Now they are back in the town where he grew up so Hayley can attend school. Perhaps, for the first time, Hayley can have a normal life, put aside her own painful memories, even have a relationship with Finn, the hot guy who obviously likes her but is hiding secrets of his own.Will being back home help Andy’s PTSD, or will his terrible memories drag him to the edge of hell, and drugs push him over? The Impossible Knife of Memory is Laurie Halse Anderson at her finest: compelling, surprising, and impossible to put down.


The book opens with Hayley, our perfect heroine, in detention. See, Hayley’s got quite the attitude on her and she’s not the sort of person to keep her opinions inside, though she is the kind of person to keep feelings bottled up there. Probably there wasn’t any room for her opinions to stay inside because her many feelings took up all the space. Anyway, Hayley got detention for correcting her history teacher, something he did not appreciate in the slightest. And, instead of writing “I will not be disrespectful to Mr. Diaz” like she was told to, Hayley writes “Correcting a teacher is not a sign of disrespect.” I LOVE THIS GIRL SO MUCH.

Here’s some background on Hayley. Her mom died when she was little. Her dad served two tours in Iraq and two in Afghanistan, and came home chest deep in PTSD. For a couple of years, her dad has been driving a big rig and she’s been riding along, homeschooled (truckschooled?) in a very non-traditional manner. As her dad’s PTSD gets worse, though, they settle down for her senior year of high school, so she can go to a real school and they can leave in her grandmother’s house which was left to them.

You might expect Hayley to be completely behind because of her lack of traditional education. Instead, she’s ahead of everyone else in everything but math, in which she’s woefully lost, a fact for which I do not blame her. Of course, education via reading and discussion in a truck with her dad wouldn’t have worked for everyone, but it really fit Hayley’s learning style. Enrolled in high school, she’s chafing against the pointless assignments and the boring lectures. The only times she truly gets engaged are when true, contentious discussions arise in her classes.

One of the many reasons I adore Laurie Halse Anderson’s books is the realism; she depicts teens, zits and all. So few YA books ever make any mention of zits, which are present on almost every teen’s face at least once in a while. At one point, Hayley’s frustrated to be dealing with stress pimples. In addition to that, there’s the lack of self-confidence, even in a girl as otherwise snarky and self-possessed as Hayley. There are awkward silences, even in my perfect ship, which only makes me love it more.

So my ship. Hayley meets this guy Finn, because he’s friends with Gracie, who adopted Hayley since they were friends as children. At first, Hayley basically ignores Finn, but he will not be ignored. I mean, he’s so not going to pass up on a girl as smart and sassy as Hayley. They both have absurd levels of knowledge about vocabulary and history. He plans the most adorable and awkward first date in the history of YA and he wears her down with his adorableness and their many things in common. They alternately banter and are rather awkward. Sometimes they fight, because they have a real relationship with its own problems. Oh, and, best of all, their personalities don’t change when they become a couple. They’re still them. Also, Finn is like the anti-stereotypical YA love interest. Though he’s attractive, it’s in a skinny with glasses way. He also refuses to drive over the speed limit, is petrified of heights, is adorably afraid that Hayley will hate him, and is inclined to make math puns. How can you not love this boy?

What Left Me Wanting More:
Though The Impossible Knife of Memory is a five star book from an emotional standpoint, I do have a few quibbles that made me go for the 4.5. First, the secondary characters could have been better developed. I really only care about Hayley and Finn, not even Hayley’s dad or Trish getting enough development to be thoroughly interesting to me. Gracie basically drops off the map entirely partway through the book. Second, though I like the PTSD elements a lot on the whole, I don’t feel completely sold. Partly, this relates to quibble one, but I also didn’t feel like the short chapters of her dad’s point of view, differentiated by italics, really helped me understand or sympathize with him. I wasn’t wholly satisfied with the closing of the ARC with Hayley’s father and Trish.

The Final Verdict:
To sum up, you should all be reading this book. Okay, maybe not all, but if you’re the sort of reader who, like me, enjoys dark contemporaries that can make you laugh while they break your heart a bit, then GO PREORDER THIS NOW.

Hayley has been on the road with her former military dad Andy for five years. During this time she's been homeschooled or rather unschooled. They only stop at places for a short time before they are off on the road again. Now her dad wants Hayley to go to high school. They move into her grandmother's house and Hayley hopes and prays her father's demons don't mess up her chances at having a normal life. Her father suffers from PTSD and has constant nightmares of his duty in Iraq that makes both his and Hayley's life hell. Can she help her father? Can she stop him from dropping over the edge of sanity?

I totally loved this story. First off, Anderson, nails PTSD. I can say this as I grew up with a father who I feel suffered from PTSD. So many of the scenes where Andy's demons surface, felt like glimpses into some of what I went through as a teen. I applaud Anderson's courage for giving readers a real taste of what it is like to be around someone who deals with this.

There's so many scenes that don't hold back on the horror, terror, and pain of PTSD. Andy tries to drown his nightmares with drugs and alcohol. Hayley tries to help him and really is in fact the parent to him. These scenes are raw but equally haunting. The life Hayley lives, teetering close to the edge, is very painful. It would be very easy to show Hayley as just a victim but instead we see the courage, strength, and determination she has to try to not let this hold her back.

The friends she makes are ones that you'd want to hang with too. All of them have their own issues. I liked how they didn't really know how to approach Hayley about 'knowing' something wasn't right with her father. Also it's very realistic to show Hayley trying to avoid her friends coming to her home as she's more worried about something setting her dad off. The scene where her father comes across Hayley and Finn in the car is close to explosive.

Raw, insightful glimpse into the life of someone living with a loved one suffering with PTSD. This book is a must read and should be included in high school reading discussions.