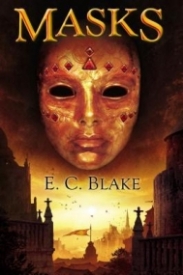 Masks, the first novel in a mesmerizing new fantasy series, draws readers into a world in which cataclysmic events have left the Autarchy of Aygrima—the one land blessed with magical resources—cut off from its former trading partners across the waters, not knowing if any of those distant peoples still live. Yet under the rule of the Autarch, Aygrima survives. And thanks to the creation of the Masks and the vigilance of the Autarch’s Watchers, no one can threaten the security of the empire.In Aygrima, magic is a Gift possessed from birth by a very small percentage of the population, with the Autarch himself the most powerful magic worker of all. Only the long-vanquished Lady of Pain and Fire had been able to challenge his rule.At the age of fifteen, citizens are recognized as adults and must don the spell-infused Masks—which denote both status and profession—whenever they are in public. To maintain the secure rule of the kingdom, the Masks are magically crafted to reveal any treasonous thoughts or actions. And once such betrayals are exposed, the Watchers are there to enforce the law.Mara Holdfast, daughter of the Autarch’s Master Maskmaker, is fast approaching her fifteenth birthday and her all-important Masking ceremony. Her father himself has been working behind closed doors to create Mara’s Mask. Once the ceremony is done, she will take her place as an adult, and Gifted with the same magical abilities as her father, she will also claim her rightful place as his apprentice.But on the day of her Masking something goes horribly wrong, and instead of celebrating, Mara is torn away from her parents, imprisoned, and consigned to a wagon bound for the mines. Is it because she didn’t turn the unMasked boy she discovered over to the Night Watchers? Or is it because she’s lied about her Gift, claiming she can only see one color of magic, when in truth she can see them all, just as she could when she was a young child?Whatever the reason, her Mask has labeled her a traitor and now she has lost everything, doomed to slavery in the mines until she dies. And not even her Gift can show Mara the future that awaits her—a future that may see her freed to aid a rebel cause, forced to become a puppet of the Autarch, or transformed into a force as dangerous to her world as the legendary Lady of Pain and Fire.

I Cannot Mask My Excitement
November 05, 2013
Overall rating
4.0
Plot
4.0
Characters
4.0
Writing Style
4.0
What I Liked:
When I received a review request for Masks, I was a bit hesitant. The cover’s not all that appealing and I’m pretty busy right now. However, the blurb had enough to make me curious. The fantasy world sounded unique in the way that Brandon Sanderson’s tend to be, and that’s something I couldn’t pass up. The comparisons to The Hunger Games and His Dark Materials were also intriguing, in that the two are almost entirely distinct. In point of fact, I really don’t see a comparison to either of those, but I’m glad I accepted because Masks has that delightfully original and dark fantasy world for which I was hoping.

First, let’s talk about the world. Aygrima is a magical place, literally. Only some people can see and use magic, which pools like water. The Autarch rules over Aygrima, maintaining order. At his order, at the age of fifteen, every citizen receives a mask. For those with the ability to see magic, the mask indicates which of the magical abilities they have, as a person generally can only see one color of magic. The masks also allow the Watchers, who have a particular kind of magic, to read people’s faces and see whether they’re plotting against the Autarch; the masking system was put in place to quell any chance of rebellion.

As you might suspect, the heroine, Mara, falls into the exceedingly rare camp of people who can see and use all the colors of magic. She is unbelievably powerful, but she’s also fifteen, scared, and not sure what to do about this ability she shouldn’t have. Smartly, she keeps her powers a secret, planning to live a quiet life, masked and working as a Maskmaker like her father. Of course, it’s not that simple. Being spurned by a best friend, a chance encounter with an unMasked boy determined to escape the city, and the failure of her own Masking combine to make Mara question the only life she’s ever known.

Now, Mara, having more power that just about anyone else ever, might seem too powerful to be realistic, however Blake tempers that nicely. On the one hand, using magic pains Mara greatly, making it less of a boon to her. Even more than that, she fears the magic is corrupting her. Darkness seeps into her as she embarks on her journey, and it’s very easy to imagine that she could end up a tyrant in her own right. Absolute power corrupts absolutely, and all that. Some of the things Mara does come across as rather silly, View Spoiler » but she is only fifteen.

In addition to loving the world building and really liking Mara’s character, I’m enjoying the romance dynamics at the moment. They’re pretty minor, as the people involved are still young and also kind of busy with surviving. There are two boys, Keltan and Hyram, who are crushing on Mara, and so far it’s a totally non-obnoxious love triangle. She doesn’t know who she likes at this point and isn’t too worried about it. No declarations of love or playing them off of one another for kicks.

What Left Me Wanting More:
Not much has been done with the Autarch at the end of book one, but he makes for a fascinating villain. I can only hope that Blake will really delve into his character within the trilogy, rather than making him merely evil. The plot arc of this book is somewhat lacking, more the first part of a journey than completing an arc of some sort within this book.

There was one thing that makes me nervous about Masks and a bit afraid that the series might anger me later. It’s just a comment said by someone about the history of Aygrima, so it doesn’t have to have anything to do with the author’s opinion, but I would still like to see the homophobia in this comment counteracted in the later books: “‘Others, though neither trending toward badness, were just…odd. Withdrawn, perhaps. A little slow. Developing a romantic interest in others of their own sex. Different.’” These are the people whose masks would reject them, and they’re being ranked along side psychopaths. THIS IS NOT OKAY. I’m not really rating down for this, because it is just one comment, but I’m noting it, and if I see anything more like this later, I will be severely put out.

The Final Verdict:
E.C. Blake’s Masks is a fantastic debut, set in a chilling and magical world. I’m very excited to read more of the series, with hope of an even tighter plot and more open-mindedness. Though marketed as an adult title, the youthful protagonist, action and world building will appeal to teen audiences just as well.

Christina Franke, Staff Top 10 Reviewer 678 reviews
Report this review Comments (0) | Was this review helpful to you? 3 0

Cookies for Elmo: A Little Book about the Big Power of Sharing
5.0
0.0 (0)
A heartwarming new picture book about sharing from beloved Sesame...