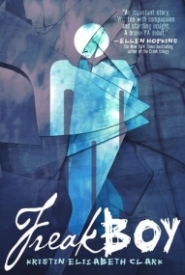 From the outside, Brendan Chase seems to have it pretty easy. He’s a star wrestler, a video game aficionado, and a loving boyfriend to his seemingly perfect match, Vanessa. But on the inside, Brendan struggles to understand why his body feels so wrong—why he sometimes fantasizes having long hair, soft skin, and gentle curves. Is there even a name for guys like him? Guys who sometimes want to be girls? Or is Brendan just a freak?In Freakboy's razor-sharp verse, Kristin Clark folds three narratives into one powerful story: Brendan trying to understand his sexual identity, Vanessa fighting to keep her and Brendan’s relationship alive, and Angel struggling to confront her demons.

We're All Freaks, and It's Okay
October 22, 2013
Overall rating
4.3
Plot
5.0
Characters
4.0
Writing Style
4.0
What I Loved:
I read Freakboy as I traversed the United States. The row in front of me on the airplane, there was a baby, so I put my headphones in and blasted music into my ears. This actually really helped me focus in on the book, and remove the rest of the world. Usually, when I read, I’m distracted: by my cat, by the internet, by little sounds outside. The whole time I was reading Freakboy on the flight, I was basically trying not to be that weird girl crying on the airplane. Kristin Elizabeth Clark’s Freakboy is one of those rare verse novels that works for me, and it made me feel so many feels as well.

In general, I really struggle with verse novels, because I expect them to follow certain rules, and generally they don’t. Freakboy actually isn’t the sort of verse I typically enjoy, but, reading it while listening to music, I was able to let go of my conceptions and just go with the book’s flow. Clark has three different first person perspectives all in verse, which I really didn’t think would work, but Clark pulls it off deftly. Brendan, Angel and Vanessa all have distinct voices and styles, even if they’re written similarly. Angel’s voice, especially stood out to me.

Clark experiments a lot with poetic form, making use of the space on the page and different poetic formats throughout. I especially loved the ones where she used a different form, like when Vanessa and Brendan’s poems merged into one. I also loved the way the formatting of the poems would symbolize the emotional distance between the characters at particular points. And, of course, I’m mightily cheered that I can like verse novels.

The plot of Freakboy is heartbreaking and needed in YA. The main character is Brendan, a wrestler, who is often called a fag, despite the fact that he has a girlfriend, Vanessa. He has never thought much of it, but events force him into introspection. He begins to wonder if he’s meant to be a girl, but he’s torn between his love of Vanessa and what that means for his sexuality. His search into his identity and what it means to be transgender or genderqueer is painful, touching, and enlightening. Clark manages to unpack a lot of the issues involved in a way that is educational without being preachy or lecturing.

My favorite character by far was Angel, who has this really powerful voice. Pretty much every quote I noted down was her. She’s transgender, passes well, but is always forthright about who she is. I love her strength and how she’s overcome so much adversity, and now wants to help teens struggling with the same issues she went through. She’s sassy and a bit rough and tumble. I loved her despite the fact that her grammar isn’t always perfect. Also, I feel like she’s a RENT reference, which can only be made of win. AND she gets a hot boy, which makes my heart happy and keeps the book from being unrelentingly depressing.

What Left Me Wanting More:
Vanessa’s perspective was interesting from the point of view of a partner dealing with someone going through this period of questioning, but I wasn’t quite as engaged with her as the other two. The way that she pushed her friends away to be with Brendan really irritated me. Her plot lines really felt unresolved, which is frustrating, and the one thing that I didn’t like about Freakboy.

The Final Verdict:
This is not my best review ever, because I’m on vacation and exhausted from traveling, but I loved Freakboy. I love that it exists and think it’s beautifully done and emotionally resonant on top of that.

Christina Franke, Staff Top 10 Reviewer 677 reviews
Report this review Comments (0) | Was this review helpful to you? 1 0