The Eye of Minds (The Mortality Doctrine #1) 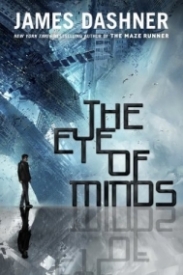 The Eye of Minds is the first book in The Mortality Doctrine, a series set in a world of hyperadvanced technology, cyberterrorists, and gaming beyond your wildest dreams . . . and your worst nightmares.Michael is a gamer. And like most gamers, he almost spends more time on the VirtNet than in the actual world. The VirtNet offers total mind and body immersion, and it’s addictive. Thanks to technology, anyone with enough money can experience fantasy worlds, risk their life without the chance of death, or just hang around with Virt-friends. And the more hacking skills you have, the more fun. Why bother following the rules when most of them are dumb, anyway?

But some rules were made for a reason. Some technology is too dangerous to fool with. And recent reports claim that one gamer is going beyond what any gamer has done before: he’s holding players hostage inside the VirtNet. The effects are horrific—the hostages have all been declared brain-dead. Yet the gamer’s motives are a mystery.The government knows that to catch a hacker, you need a hacker.

And they’ve been watching Michael. They want him on their team. But the risk is enormous. If he accepts their challenge, Michael will need to go off the VirtNet grid. There are back alleys and corners in the system human eyes have never seen and predators he can’t even fathom—and there’s the possibility that the line between game and reality will be blurred forever.

Beware the VirtNet
August 17, 2014
Overall rating
4.3
Plot
4.0
Characters
5.0
Writing Style
4.0
Michael, Sarah and Bryson don't know each other in real life, but meet frequently on the VirtNet, the method of choice for gaming in the future. Their real bodies lay in "coffins" with wiring to let them experience feelings in the VirtNet. Michael spends much more time there than he should, to the extent where he hasn't seen his busy parents for a long time, and is instead taken care of by a nanny. Odd things have been going on in the VirtNet-- a well-known and successful gamer, Skale, has gone missing, and gamers are being found in a vegetative state in their "coffins" after their virtual selves have difficulties. A villain named Kaine is suspected, and before long, Michael is approached by VirtNet Security to try to hunt him down. Michael and his friends are reluctant, but soon realize they have no choice. They are told they need to find "the Path" and that it will lead them to Kaine. After a long and arduous journey that involves much pain and loss of virtual lives, Michaal alone realizes the solution-- and it's not one he ever would have suspected. The first book in a series.

A lot of young readers are fond of video games, but there are few books out there about them ,mainly because they would be kind of boring if they just talked about kids playing video games. But to get sucked into one... Dashner does a good job of making this an exciting book with lots of action and twists.

Karen Yingling, Staff Reviewer Top 10 Reviewer 1322 reviews
Report this review Comments (0) | Was this review helpful to you? 0 0
A Page Turning Cyber Thrill Ride
October 28, 2013
Overall rating
3.7
Plot
4.0
Characters
3.0
Writing Style
4.0
James Dashner does it again with The Eye of Minds, the first book in The Morality Doctrine. Set in the near future, Dashner takes his readers on a techno-thrill ride filled with cyber terrorists and an intricate and dangerous journey through the virtual world.

In The Eye of Minds, Michael is one of the best gamers out there. So good in fact that he is sent out into the dark areas of the VirtNet to help the government find and capture some of the deadliest predators in the net. It is only with the help of his fellow gaming friends can Michael even hope to make it out alive.

While sometimes the dialogue between the characters seemed out of place. It doesn’t take away from the novel. There are so many strong points that this minor weakness can be completely ignored.

The world building in this story is mind blowing. The imagery draws the reader into the VirtNet much like it does Michael. VirtNet is filled with dark passages and even darker characters. Not everyone on the Virtnet can be trusted and some will sacrifices others just to save themselves. Michael and his friends must hack there way to find Kaine, an uber-villian in cyberspace, before he causes the VirtNet to become a truly dangerous place.

The Eye of Minds is filled with rapid plot twists and cliffhangers that keep the reader on the edge of the seat- making it nearly impossible to put down I found myself so caught up with the story that I would forget I was reading in public. I laughed, cringed, and shouted – and I didn’t even care who heard me.

Fans of The Maze Runner will not be disappointed. Can’t wait for the continuation of The Morality Doctrine.

Overall rating
3.3
Plot
4.0  (1)
Characters
3.0  (1)
Writing Style
3.0  (1)
Already have an account? Log in now or Create an account
The Eye of Minds is a virtual wild ride with real problems
October 30, 2013
Overall rating
3.3
Plot
4.0
Characters
3.0
Writing Style
3.0
Oh James Dashner you have done it again. After reading "Maze Runner" I felt like I wasn't smart enough to figure the very complicated plot he had woven and now here I am again - utterly confused. "The Eye of Minds" is a twist in that we don't really know what is virtual and what is real. Michael along with his two hacking/gaming friends through themselves into the VirtNet to help the authorities and find the big bad guy who could be killing people for real while they are in their virtual worlds. Kaine remains an enigma and it will take everything these young people have to get through the games to find the path and stop a killer. Adults who enjoy gaming and fans of "Ready Player One" will enjoy the intricate plot of this book. The added angle of the government involving this group of young people is a bonus that makes the confusion complete - you don't know who the bad guys are.

Kimberly McGee Top 1000 Reviewer 2 reviews
Report this review Comments (0) | Was this review helpful to you? 0 0
Powered by JReviews
How to resolve AdBlock issue?
X

Olivia Farr, Staff Reviewer
"ALL OUR HIDDEN GIFTS was a riveting and darkly captivating YA fantasy/thriller/horror read. Maeve is a teen girl and not..."

The Lost Girls
5.0
KM kathy melnick
"BEST URGENT EFFECTIVE LOVE SPELL TO GET YOUR EX/WIFE/HUSBAND BACK FAST AND TO SAVE YOUR MARRIAGE NOW CONTACT LORD..."

The Outsiders
5.0
KM kathy melnick
"BEST URGENT EFFECTIVE LOVE SPELL TO GET YOUR EX/WIFE/HUSBAND BACK FAST AND TO SAVE YOUR MARRIAGE NOW CONTACT LORD..."

The Hunger Games (The Hunger Games #1)
5.0
KM kathy melnick
"BEST URGENT EFFECTIVE LOVE SPELL TO GET YOUR EX/WIFE/HUSBAND BACK FAST AND TO SAVE YOUR MARRIAGE NOW CONTACT LORD..."