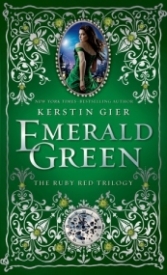 Gwen has a destiny to fulfill, but no one will tell her what it is.

She’s only recently learned that she is the Ruby, the final member of the time-traveling Circle of Twelve, and since then nothing has been going right. She suspects the founder of the Circle, Count Saint-German, is up to something nefarious, but nobody will believe her. And she’s just learned that her charming time-traveling partner, Gideon, has probably been using her all along.This stunning conclusion picks up where Sapphire Blue left off, reaching new heights of intrigue and romance as Gwen finally uncovers the secrets of the time-traveling society and learns her fate.

A Largely Satisfying Conclusion
October 08, 2013
Overall rating
3.7
Plot
3.0
Characters
4.0
Writing Style
4.0
What I liked:
Woo! I finished a complete series in a week. Gooo me! Now that I’m done, I can assure you that the Ruby Red Trilogy doesn’t read so much like a trilogy as a single novel that has been spread out across three books. In fact, I think it very easily could have been condensed into one somewhat long novel, rather than a trilogy. Normally, such an expansion would be hugely frustrating, but the individual volumes are all highly entertaining, even if the bulk of the actual plot occurs in the final volume, Emerald Green.

Though the plot did make some steps forward in the two prior books, the bulk of it happens here. Finally, the villains are revealed and the complexities of the time travel as well. Beforehand, the focus really fell on the romance, with some time-traveling craziness as a humorous backdrop, but now everything really comes together. Gier manages to get through this imbalance in world building rather well, with this novel not feeling tedious or info-dumpy, even though there’s a lot of information that needs to be conveyed. However, I will say that Emerald Green did take a good deal more time to read, though that isn’t a bad thing.

So far, I’ve talked a lot about romance in my reviews for Ruby Red and Sapphire Blue, and my opinion on that really hasn’t changed, so I want to talk about some subjects I’ve left mostly on the side until now: the rest of the cast. The Ruby Red Trilogy has a really amazing cast, among whom Gideon and Gwyneth really aren’t my favorites.

Perhaps my favorite character is Gwen’s grandfather, Lucas. She meets him at various points in his life, and he’s just such a wonderfully sweet man. Also, through him, we get to see a different side of Lady Arista, Gwen’s grandmother. I loved that this little detail was added into the novel, because Arista had been pretty well demonized, alongside Charlotte and Glenda. I’m glad to know that Arista and Lucas really are happy, and that perhaps the reason Arista’s so touchy now is that she’s without her love.

Then there’s Lesley, Gwen’s best friend. I do wish I’d gotten to see a bit more of her, and of how her story played out, but, that aside, I love her. Lesley’s a total nerd and the most devoted friend. Unlike much YA, there’s no rivalry between the two at all, and, though the book’s the Gwen show, she clearly cares about Lesley just as much. For example, Gwen will even interrupt a make out session with Gideon to take a call from Lesley; she will ignore a call from her bestie for no one! Also, if you remember that the plot of the series takes place over a fortnight or less, the fact that we don’t learn much about Lesley’s life seems less selfishness on Gwen’s part and more the fact that Gwen had a crazy couple of weeks. Anyway, Lesley believes Gwen on everything, and gamely Google searches, finding out plenty of important information. The two trust each other implicitly and it’s so sweet.

The last two characters I want to highlight bring in so many laughs and are basically the best: Xemerius and Aunt Maddy. Xemerius is a little demon who joined Gwen in book two, since she can see him just like she can see ghosts. No one had seen and heard him in ages, so he followed her and wouldn’t leave. At first he was a bit annoying, but he’s downright hilarious, offering taunts and insults to the people who can’t see him constantly. Also, he loves to read romance novels over Aunt Maddy’s shoulder. The cuteness! Aunt Maddy’s kooky and maybe a little senile, but I love her and how game she is for adventure.

What Left Me Wanting More:
Like the first two, Emerald Green is incredibly fun to read, however I found myself stumbling up against the logic more than in the prior two novels as the world building really amped up. The time travel, which beforehand seemed straightforward—anything that happened in the past had already happened, so nothing changed—is revealed to be a hodge-podge where things can be changed, but apprently without massive, far-reaching consequences. View Spoiler » Making changes like the hidden spoiler would result in a huge unknown impact on the future, but Gwen gets away with it scot-free. I think not.

Similarly, the resolution of the plot with the villain was both confusing and cheesy. In Emerald Green, the reader learns who the bad guy is and how he’s been operating. Perhaps I’m missing something, but I do not understand how some of the logic worked. On top of that, the resolution of the romantic plot really drives home the instalove to an upsetting degree. One of the characters made a great point that there’s no need to get everything done RIGHT NOW, since they can time travel back at any point without it making a big difference. The romance would have been so much stronger if the events had not been crammed into such a brief time span, especially when there was so little need for that.

The Final Verdict:
For all of my ranting, Emerald Green still merited a 3.5 from me for the sheer joy of the read and the delightful humor, despite the drawback of the confusing world building and overly-accelerated pacing.

Christina Franke, Staff Top 10 Reviewer 678 reviews
Report this review Comments (0) | Was this review helpful to you? 1 1