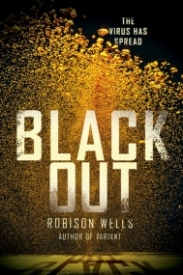 Laura and Alec are trained terrorists.Jack and Aubrey are high school students.There was no reason for them to ever meet.But now, a mysterious virus is spreading throughout America, infecting teenagers with impossible powers. And these four are about to find their lives intertwined in a complex web of deception, loyalty, and catastrophic danger—where one wrong choice could trigger an explosion that ends it all.

Splosions! And Powers! And Action!
September 30, 2013
Overall rating
4.0
Plot
5.0
Characters
3.0
Writing Style
4.0
What I Liked:
So, you know how I’m always going on and on about how I’m a highly character-focused reader? Well, this book is one of those rare exceptions where I’m totally in the book for something else. The amount that I enjoyed this was definitely out of character for me (see what I did there?), but it was a thrill ride of adventures and powers and betrayal, so, frankly my dears, I do not give a darn.

Obviously, Blackout bears some marked similarities to the X-Men, but, honestly, what story about people with powers doesn’t get compared to that these days? In tone and sheer amount of destruction, I’d say the comparison’s actually pretty apt. However, in this case, it’s apparently not evolution at work so much as experimentation that seems to have caused a virus that is giving teenagers epic powers. It saddens me that I would be too old to get a power now.

One really cool thing that Wells did, though, is that the powers aren’t just badass; they’re a blessing and a curse. Basically, if you have a power, you’re going to have some sort of physical drawback, as well. Your power might drain your energy super fast or make you sick or something like that. Though sort of a small thing, I loved this twist he put on the powers, because usually there are a few powers that basically make the person invincible, and that’s not the case here.

In the way the plot goes down, I’m actually heavily reminded of another YA novel. Usually, I try to leave these comparisons out, but today I feel moved to address it, so deal with it. Like Alexandra Bracken’s The Darkest Minds, young people are being rounded up by the government. They’re stuck in camps and they’re not happy. The big difference, though, is that in Bracken’s novel, the government doesn’t DO ANYTHING WITH THEM; they’re just this continual drain on resources with no plan for the future. Not so with Blackout. In this case, the government is separating the teens with powers from those without, and training up the empowered ones to work for them against the teenagers causing terrorist attacks with their powers. Now HERE is a government reaction that I can believe.

Even better, unlike with Bracken’s, the teens use their powers to defend themselves rather than meekly submitting, which is perfect, because, hello, rebellion against authority is sort of what teens are programmed for. Also, Wells does a great job making everything super unclear, in that there’s not really a good or an evil side in this; each side feels like they’re working to make things better one way or another and has some claim to that. I love when books are this complex and dark.

What Left Me Wanting More:
Wells uses a third person limited omniscient POV that switches between the four main characters: Aubrey, Jack, Laura and Alec. While effective for the action sequences and covering a lot of ground, this doesn’t really bring the emotions, which is really the only thing I was missing while reading Blackout. The characters were interesting, but I wasn’t super attached to any of them. Jack’s probably my favorite one at this point.

The Final Verdict:
If you enjoy fast-paced novels with lots of explosions and power-wielding teenagers, I highly recommend Blackout. Though I’m not generally into the more plot-heavy, character-light books, I really enjoyed reading every bit of Blackout, because humans with powers are one of my favorite things. The ending has me excited for the next book in the series, which I will most definitely be reading.

Author Chat with Kelly Jensen (Body Talk: 37 Voices Explore Our Radical Anatomy) Plus Giveaway! ~ (US Only)

Today we're excited to chat with Kelly Jensen author of Body Talk: 37 Voices Explore Our Radical Anatomy. Read on for more about Kelly and her book, plus a giveaway!       Meet &...
Posted in News & Updates
Read more

Spotlight on Ignite The Sun (Hanna Howard), Guest Post, Plus Giveaway! ~ (US Only)

Today we're excited to spotlight Ignite The Sun  by Hanna Howard.  Read on for more about Hanna and her book, an guest post, plus an giveaway!        Meet Hanna Howard ! ...
Posted in News & Updates
Read more

Spotlight on Vicious Spirits (Kat Cho), Excerpt, Plus Giveaway! ~ (US Only)

Today we're excited to spotlight Vicious Spirits  by Kat Cho.  Read on for more about Kat and her book, an excerpt, plus an giveaway!        Meet Kat Cho !     ...
Posted in News & Updates
Read more

Today we're excited to chat with Zoraida Cordova author of Wayward Witch. Read on for more about Zoraida and her book, plus a giveaway!       Meet  Zoraida Cordova ! Zoraida...
Posted in News & Updates
Read more

Today we're excited to spotlight Wings  by Nicole Conway.  Read on for more about Nicole and her book, an guest post, plus an giveaway!        Meet Nicole Conway !  ...
Posted in News & Updates
Read more

Fussy Flamingo
4.5
0.0 (0)
A hysterical flamingo children's book about a picky eater and...

Samantha Randolph, Promotions Manager
"Audiobook review Margot is tired of not getting answers from her mother about where she came from..."

Samantha Randolph, Promotions Manager
"HIS HIDEOUS HEART is a powerhouse of incredible writers retelling different works of Edgar Allen Poe. From "The Raven" to..."