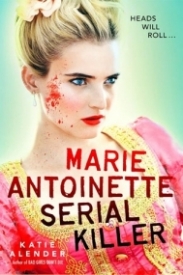 Colette Iselin is excited to go to Paris on a class trip. She’ll get to soak up the beauty and culture, and maybe even learn something about her family’s French roots.But a series of gruesome murders are taking place across the city, putting everyone on edge. And as she tours museums and palaces, Colette keeps seeing a strange vision: a pale woman in a ball gown and powdered wig, who looks suspiciously like Marie Antoinette.Colette knows her popular, status-obsessed friends won’t believe her, so she seeks out the help of a charming French boy. Together, they uncover a shocking secret involving a dark, hidden history. When Colette realizes she herself may hold the key to the mystery, her own life is suddenly in danger . . .Acclaimed author Katie Alender brings heart-stopping suspense to this story of revenge, betrayal, intrigue — and one killer queen.

Fun Contemporary That Will Make You Want to Travel to Paris
September 28, 2013
Overall rating
3.0
Plot
3.0
Characters
3.0
Writing Style
3.0
What I Liked:
Marie Antoinette, Serial Killer starts off a bit rockily, and I feared that I would have to hate Colette, the main character. At the outset, she’s vapid, selfish, rude, and hangs out with girls she dislikes just to be popular. She also does that whole “I’m pretty, but not that pretty” thing, when later everyone’s super impressed with how she looks. However, if you push through that, Marie Antoinette, Serial Killer is the sort of book where the heroine actually learns something. By the end of the book, she is a changed, more likable person, which made her early behavior easier to stomach. Also, I liked that Alender showed where Colette’s skewed values came from, by digging into her relationship with her father.

Colette and her supposed besties, Pilar and Hannah, are going on a class trip to Paris. During the trip, their friendship is seriously tested, both by the amount of time they have to spend together and by the fact that the murder mystery thing gives Colette something more important to focus on than popularity. The trip takes place over the course of nine days and is a pretty believable class trip, with a busy schedule, a bit of free time, and also some sneaking out, because teenagers.

While out and about touring, Colette discovers that she greatly resembles a woman in historical paintings. There’s also her medallion that has a key and Marie Antoinette’s emblem. Then there’s the series of bodies found beheaded and the ghost of a woman in historical garb that’s been following her around. The pseudo-historical element is rather silly, but it’s meant to be. Either you can accept that and enjoy it or you can’t. What I liked best about this aspect was that Alender did a fairly balanced portrayal of Marie Antoinette. She references that the “Let them eat cake” line truthfully never happened and cites Marie Antoinette’s love of her children. Marie Antoinette tends to get a really bad reputation in pop culture, and there are reasons for that too, but I thought it was nice that Alender showed both the good and the bad.

There’s a little romance that happens too. Initially, it seems that Marie Antoinette, Serial Killer is going to have a really obnoxious love triangle, but it actually doesn’t. Colette starts up a little flirtation with the college-aged tour guide Jules. I love two things about this. First, Jules isn’t insanely gorgeous; he’s cute but not someone you’d immediately make note of if you passed him on the street. Second, they didn’t fall in love in nine days. They had a totally realistic romance while she was in Paris. When I went on college trips abroad, several people had brief flings in the cities we stayed in for longer periods of time, and none of them ended in something long-lasting.

What Left Me Wanting More:
Still, the plotting is a bit contrived, and I never really bought into the vengeful, murderous ghost thing. Partly, it’s because this isn’t a horror novel, and I knew there was no chance that Colette was ever going to bite the dust. There were also several instances where Colette was rather boneheaded. For instance, it took her far too long to put together the connection between the murders, which she could easily have figured out earlier. Then there’s that time when, though she’s on a trip to Paris, which is purportedly to help her with her French, where she asks Jules how to say “No” in French. *headdesks* This is even more frustrating, since she’d already exhibited that, though not good at French, she did know some words and “non” is basically as easy as it gets.

The Final Verdict:
Marie Antoinette, Serial Killer is a light, entertaining contemporary novel with a head-chopping historical twist. It’s a quick fluffy read, full of gowns, backstabbing and mysterious secrets of the past.

Olivia Farr, Staff Reviewer
"LADY SMOKE is every bit as addictive as the first in this engrossing trilogy. Picking up where the first book..."

Penny Olson
"The Queen's Assassin is a fantasy romance geared toward the younger YA reader. It is told from the first person..."

Olivia Farr, Staff Reviewer
"ASH PRINCESS is an engaging YA fantasy that takes us to the conquered land of Astrea. Theodosia's mother, the Fire..."

The Everything I Have Lost
4.3

Kim Baccellia, Staff Reviewer
"At age twelve, Julia starts writing in a diary. She writes about what she witnesses in her town of Juarez,..."

Olivia Farr, Staff Reviewer
"STING is an intriguing YA dystopian retelling of THE COUNT OF MONTE CHRISTO. The world has been ravaged by climate..."

The Paper Girl of Paris
4.0

Nanouk, Staff Reviewer
"The Paper Girl of Paris is written by journalist Jordyn Taylor and is set in both historical 1940’s and nowadays..."

Olivia Farr, Staff Reviewer
"THE MIDNIGHT LIE is a lush and atmospheric YA fantasy. The book transports us to another world, where people are..."

Olivia Farr, Staff Reviewer
"DEFY THE SUN is a fantastic conclusion to this YA fantasy duology. This book picks up right where the first..."

We Unleash the Merciless Storm
3.7