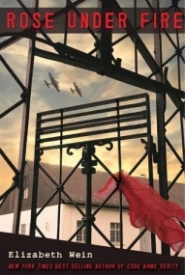 While flying an Allied fighter plane from Paris to England, American ATA pilot and amateur poet, Rose Justice, is captured by the Nazis and sent to Ravensbrück, the notorious women's concentration camp. Trapped in horrific circumstances, Rose finds hope in the impossible through the loyalty, bravery and friendship of her fellow prisoners. But will that be enough to endure the fate that’s in store for her? Elizabeth Wein, author of the critically-acclaimed and best-selling Code Name Verity, delivers another stunning WWII thriller. The unforgettable story of Rose Justice is forged from heart-wrenching courage, resolve, and the slim, bright chance of survival.

As Intense and Moving as Code Name Verity
September 03, 2013
Overall rating
4.7
Plot
5.0
Characters
5.0
Writing Style
4.0
What I Loved:
Code Name Verity is one of those rare books that awed both critics and actual readers. Initially, I almost DNFed Code Name Verity, but I ended up being seriously impressed with both Wein's writing and her gumption. At the same time, though, Code Name Verity never really got me right in the feels, the way it did so many other people. Thus, though I suspect it may not be a popular opinion, I love Rose Under Fire more than Code Name Verity. Once again, Wein's story is incredibly dark and daring, and with a powerful narrative voice.

As Rose Under Fire began, I really wasn't sure how I felt about Rose Justice. She's very different from Julie and Maddie, the heroines of Code Name Verity. Rose lacks their seriousness and their cleverness; she's not stupid, but she's a good deal more innocent and has seen less of life's dangers. Thus far, she's been sheltered and pampered, and, like many Americans setting off for the front, she sees the war as something romantic and anticipates performing heroic actions. She desperately hopes to be allowed to fly to France, stifling under the few jobs that American female civilian pilots are allowed to perform in the war effort.

Rose's narration fits her perfectly. Her sentences are long and push forward with excitement, as though venturing out in search of something exciting and wonderful. There's a perkiness to her in the beginning, a freshness, as well as a flair for the poetic, coming through in metaphors and unique word choices. As Rose's story darkens, the brightness and naivete seeps out of her narration, leaving her the same Rose, but weighted down by all that she has experienced.

Wein looks at World War II through a female lens, which is part of what makes these two books disparate from the mass of WWII fiction out there. The youth of the characters also distinguishes this series from the rest, particularly given the unflinching treatment Wein gives the dark subject matter. Wein does not shy away from the atrocities committed, and in Rose Under Fire she focuses on the concentration camps, particularly Ravensbrück.

Last year, I read a nonfiction novel about a train full of women sent to Auschwitz called A Train in Winter. As I read Rose's account of her time in Ravensbrück, I could not help compare this fictional experience with what I learned in A Train in Winter. That book puts forward the theory that the women were better able to survive in Auschwitz because of the way they all supported one another throughout the whole experience, putting the survival of the group over that of individuals, and creating a real family with their fellow prisoners. This same sort of spirit appears in Rose Under Fire, as Rose bonds with her bunk mates, the Rabbits. So many women survive Ravensbrück that might not have because of the way they all worked together and helped buoy one another's spirits. Those that did not survive will be remembered, their names memorized for posterity, and justice searched out in their honor.

The most heartrending aspect of Rose Under Fire is the accounting of the Rabbits, the women who make themselves into a protective family for Rose. These "rabbits" were medical test subjects. They were shot with bullets, given gangrene, amputated, and had bones removed from their legs so doctors could test cures for soldiers on the front. What these women went through is unbelievably horrific, but they are still such powerfully strong characters, such fighters, so desperate to live or at least get their story out. While the characters are fictional, real women went through these sorts of experiments and these tears that are slipping out of my eyes as I type (yes, this book did manage to make me cry) are for them. Wein's Afterword, in which she explains why she wrote this book, really drives the whole point of the book home.

What Left Me Wanting More:
Much as I loved this book, I was not a fan of Rose's poetry. Though I did quite enjoy Edna St. Vincent Millay's excerpts and the reference to Emily Dickinson in one of Rose's poems, I did not get Rose's. Most of them felt like prose chopped up into shorter lines to me. However, I will be the first to admit that I do not really get poetry. My heart and mind like prose. As such, I found myself generally skimming through her poems, since even reading them aloud didn't make them work for me, a technique that often helps me find the rhythm in the poetry and comprehend its beauty.

The Final Verdict:
Rarely do books evoke so much of an emotional response from me, so suffice it to say that Rose Under Fire has every bit of the powerful emotional punch of Code Name Verity. I wouldn't really say that one or the other is a better book, but likely one will resonate more with each reader. I highly encourage readers to try these beautiful, emotional, historically resonant novels. Also, please note that while these are fabulous books for teen readers, they have wonderful crossover potential, and are good books to give out to skeptical adults who do not believe teen fiction can be literary.

Overall rating
4.7
Plot
5.0  (1)
Characters
5.0  (1)
Writing Style
4.0  (1)
Already have an account? Log in now or Create an account
Every bit the equal to its predecessor
June 10, 2015
Overall rating
4.7
Plot
5.0
Characters
5.0
Writing Style
4.0
If you loved Code Name Verity, you'll love Rose Under Fire. It's a worthy follow up in every way. Wein didn't let her readers down with this one! Loved it! Great character development, great pacing. Very intriguing.

Jane Gates Top 500 Reviewer 14 reviews
Report this review Comments (0) | Was this review helpful to you? 0 0
Powered by JReviews
How to resolve AdBlock issue?
X