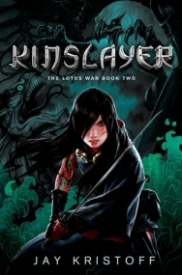 A SHATTERED EMPIRE The mad Shōgun Yoritomo has been assassinated by the Stormdancer Yukiko, and the threat of civil war looms over the Shima Imperium. The Lotus Guild conspires to renew the nation’s broken dynasty and crush the growing rebellion simultaneously – by endorsing a new Shōgun who desires nothing more than to see Yukiko dead. A DARK LEGACY Yukiko and the mighty thunder tiger Buruu have been cast in the role of heroes by the Kagé rebellion. But Yukiko herself is blinded by rage over her father’s death, and her ability to hear the thoughts of beasts is swelling beyond her power to control. Along with Buruu, Yukiko’s anchor is Kin, the rebel Guildsman who helped her escape from Yoritomo’s clutches. But Kin has his own secrets, and is haunted by visions of a future he’d rather die than see realized. A GATHERING STORM Kagé assassins lurk within the Shōgun’s palace, plotting to end the new dynasty before it begins. A waif from Kigen’s gutters begins a friendship that could undo the entire empire. A new enemy gathers its strength, readying to push the fracturing Shima imperium into a war it cannot hope to survive. And across raging oceans, amongst islands of black glass, Yukiko and Buruu will face foes no katana or talon can defeat. The ghosts of a blood-stained past.

More Intense and with a Faster Pace Than Stormdancer!
September 01, 2013
Overall rating
5.0
Plot
5.0
Characters
5.0
Writing Style
5.0
What I Loved:
Last year, I was really blown away by Jay Kristoff's debut, Stormdancer. Though this often isn't the case, I'm actually more impressed with the sequel. This does seem to have been a trend lately, and I do hope it continues, especially if the book world is going to continue to be overrun with series. But I digress. Kinslayer is darker, creepier, and more intense than its predecessor. If you're one of those people who thinks characters meeting gruesome ends is a necessity in epic works, get excited, because Jay Kristoff has a real flair for murdering his characters in nasty ways.

The one weakness Stormdancer had, if it can be counted as one, for me was that it had that typical fantasy slowness at the beginning. Building a world takes time, and characterization took a back seat while that happened. In Kinslayer, the world's already built, so the action kicks off right from the start. Of course, Kristoff does lull you into a nice little unsuspecting place by not doing anything particularly cruel in the first half, and then he pounces on your hear and tears it to shreds. But we'll come back to that.

In the opening, we spend some time with Yukiko and Buruu, who remains magnificent. Yukiko on the other hand, well, girl's not doing so hot. The Kenning has really amped up, and is inducing serious headaches and bleeds out of facial orifices. To silence the voices, she's got a drinking problem. Also, Yukiko's fiercely angry and desirous of vengeance, because, well, she was scorned and apparently that guy still has ways to mess with her. Basically, Yukiko's not heroic. She's not a role model. She's not particularly likable. While this will no doubt be tough for a lot of readers to fathom, I thought it was a nice change of pace from more saintly heroines. Kristoff's world is one where even the good guys have a lot of the dark side in them.

Introducing new characters can be tricky, and often backfires. In such large casts, it's hard enough to keep everyone straight, though, thankfully, there's a handy dandy guide at the opening of the novel that lists the pertinent cast members, which totally saved me. Actually, in this case, I love the new additions to the cast. Hana is probably my second favorite human character. She's on the lowest rung of society, fit, literally, only to carry human waste, which she does in the palace. One-eyed and spat upon, she still dreams and dares, having joined the rebellion. I also love her brother Yoshi and his boyfriend Jurou. The healthiest relationship (which may not be that healthy, but let's remember how Jay Kristoff hates happiness) is a gay one, which gives me joy. Momentarily. Until Kristoff stomps on that joy.

Kristoff is also doing some interesting things evolving the characters we knew from the first book. The character arcs are really impressive. Kin shows signs of doing something intense in book three, which could be for good or for ill and the fact that I have to wait forever to find out is frustrating. Aisha has a part to play, and it is intense. My new favorite (human) character, though, is Michi, who we didn't really get to see in action, and, oh man, is it a thing of beauty. She's way more lethal than Yukiko, who, let's face it, mostly has animals do the work for her. Again, I like that, though Yukiko's the figurehead, she's really not any sort of savior; other people are doing the bulk of the work. Of course, one of my favorite animal characters bit the dust. THANKS FOR THAT SCARRING PAIN, JAY.

The plot of Kinslayer moves a bit slowly, but if you wait for it there's some crazy stuff going down. Some things caught me entirely off guard, and now I just have to wait and find out what happens. There's a bit of a second book element in that most of the happenings here are clearly moving the players into place for the epic, bloody showdown to come. Still, I don't feel like Kristoff was just biding his time and I was never bored, so I really don't mind that. Some of Yukiko's journey does seem a bit out of place, but I suspect that something that happened there will become absolutely crucial, so, again, really not an issue for me.

The Final Verdict:
Kinslayer is intense and heart-punching. Are you ready? Probably not. Will you venture into the storm anyway? I think you should.

Olivia Farr, Staff Reviewer
"THE BITTERWINE OATH is a YA fantasy and light horror read. Nat is the descendent of the girl who put..."
The Book of Dust: The Secret Commonwealth
4.3