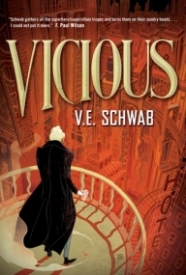 A masterful, twisted tale of ambition, jealousy, betrayal, and
superpowers, set in a near-future world.

Victor and Eli started out as college roommates—brilliant, arrogant, lonely boys who recognized the same sharpness and ambition in each other. In their senior year, a shared research interest in adrenaline, near-death experiences, and seemingly supernatural events reveals an intriguing possibility: that under the right conditions, someone could develop extraordinary abilities. But when their thesis moves from the academic to the experimental, things go horribly wrong.

Ten years later, Victor breaks out of prison, determined to catch up to his old friend (now foe), aided by a young girl whose reserved nature obscures a stunning ability. Meanwhile, Eli is on a mission to eradicate every other super-powered person that he can find—aside from his sidekick, an enigmatic woman with an unbreakable will.

Armed with terrible power on both sides, driven by the memory of betrayal and loss, the archnemeses have set a course for revenge—but who will be left alive at the end?
Tweet

Chilling, dark, and twisted -- in the best possible way
January 07, 2014
Overall rating
5.0
Plot
5.0
Characters
5.0
Writing Style
5.0
I loved Vicious from the first few chilling pages. Vicious is a little grittier, a little bleaker than Victoria's YA novels, but although the prose is more stark than in her other books, it lacks none of her characteristic lyricism. It's obvious from the disturbing opening -- where we meet two of our main characters as they dig up a grave -- that the reader is in for a well-crafted tale spun by a mind that is twisted in the best possible way.

Let's talk for a minute about characters. Vicious focuses around two central characters, Victor and Eli, once best friends, now mortal enemies. Each has his own small band of misfit allies, some with powers, some without. And the best part of every single one of these characters is that each of them chooses sides based on what they believe in their hearts to be right. Maybe not good, but right. The calls they make are difficult, their actions are not clean and the consequences are often messy, but each fully realized secondary character picks the side they think is best not just for them individually, but the world as a whole. Which makes every character think they are fighting for the side of light, when in reality, they all inhabit a world of gray.

Getting back to Eli and Victor, my favorite villains in fiction have always been the ones who were motivated by more than darkness, power, and a desire to watch the world burn. Sure, there's a strange dark beauty in a villain who will stop at nothing to destroy the hero, simply because he stands on the side of good. The Jokers and the Voldemorts and the Moriartys. But an excellent villain is one who can make me root for him, in spite of the fact that he opposes our hero, because in his own mind, he is right. These are the Lokis, the Magnetos, the Dr. Horribles, the Javerts. They're the villains I know need to be defeated, but I keep hoping they will redeem themselves, because they make me care for them. Sometimes even more than I care for the good guys.

Eli and Victor both fall into this second category. Vicious is a book about villains, except none of the characters see themselves as particularly villainous. Certainly neither starts off that way. Eli and Victor begin as college roommates and best friends, whose downward spiral into villainy begins as nothing more than a thesis project and a flight of fancy. This is not a case of characters destined to be evil masterminds. They're simply two guys who were, quite literally, too clever for their own good.

Ironically, the character who is indisputably the more righteous of the pair is probably the closest thing to a pure villain, whereas the one who comes across as more heroic (although even he is far from a hero) sees himself as irredeemable. The character with the stronger moral compass drifts deep into the darkness, while the one with little empathy or remorse holds himself in check right where the light begins to fade into shadow. It's a fascinating dichotomy, and brilliantly executed. Vicious doesn't paint either protagonist in particularly rosy colors, and both characters make terrible decisions and, at one point or another, commit terrible acts of violence with motives that are far from noble. But in this world where nothing is as simple as black and white or good and evil, it's fascinating to see who we root for. I finished the book thinking really, one character wasn't so bad -- surely he wasn't a villain -- until I thought back to what he actually did, and I realized yes, yes he was. He just wasn't as much of a villain as the other character. And I didn't want anything bad to happen to him, because I liked him -- even though in a black-and-white world, I really shouldn't have liked him.

As for the plot itself, Vicious is an intricately woven tale of intrigue and deception, betrayal and revenge. The rules of the world are simple and clear, enough that you find yourself wondering if maybe it is possible to give yourself superpowers through thwarting death. The twists and turns aren't predictable, yet everything makes sense. The action isn't constant, but ebbs and flows in a natural rhythm that keeps the pages flying by. Victoria masterfully builds the tension leading to the final confrontation between Victor and Eli throughout the entire book, slowly ratcheting up anticipation until it's almost unbearable. And when they finally do meet, the result is explosive, bloody, and deliciously satisfying. I was left wanting more, not because any threads were left dangling, but because this world and these characters were so painfully amazing that it hurt to be parted from them.

If you're a fan of sympathetic villains and realistic superpowers and dark, twisty tales brimming with moral ambiguity, make haste to your nearest bookseller and pick up a copy of Vicious. Run, don't walk. Or, if you can, fly.

Vicious was different. This is the only thing I kept thinking while reading it. I don't have a meaningful experience in the field of YA/A literature but still this was nothing like I ever read before. The premise is simple: Victor and Eli are buddies and study together. One day Eli decides to understand the phenomenon of EOs. EOs are Extra-Ordinary people with special abilities whose appereance, Eli claims, is linked to their near death experiences. So he decides to create an EO himself. He experiments first on Victor and then on himself. Things are bound to go wrong. And they do. Years after that we find Eli, a self-proclaimed hero whose intent is to wipe the earth from all EOs, and Victor, who wants to kill him.

This story was chilling, brutal and at times gory. You need to sympathise with someone but everyone seems to be in the wrong. The book plays with back and forths, multiple POVs and a countdown. It manages to make the reader anxious and the suspance is almost unbeareable. The ending was a bit anticlimatic but left me with a lot of curiosity for the next instalment in this series because... what could possibly happen next?

V.E. Schwab is slowly becoming one of my favourite authors and I'm so grateful for that! I would recommend anything written by her and this book is one of them!

Annamaria Top 500 Reviewer 29 reviews
Report this review Comments (0) | Was this review helpful to you? 0 0
Powered by JReviews
How to resolve AdBlock issue?
X