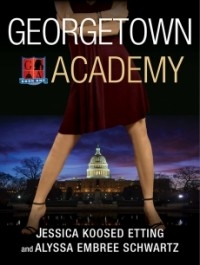 It’s the beginning of a new political administration. That might not mean much at most high schools, but at Georgetown Academy, Washington D.C.’s most elite prep school, January 20th means new alliances, new flings, and new places to party.

While freshmen—nicknamed “interns” for their willingness to jump into bed with anyone higher on the D.C. totem pole—navigate the not-so-friendly halls of GA searching for Algebra and Bio classes, the school’s lifers have other things on their minds.

For self-proclaimed D.C. royalty Brinley Madison (of those Madisons), the first day of school is all about establishing the social hierarchy and playing the part of perfect political wife to her boyfriend, the outgoing Vice President’s son. Too bad he has a wandering eye that puts Bill Clinton’s to shame. Can she keep him, and her own secret vice, in check?

Ellie Walker, Brinley’s best friend, floats through the halls on the arm of golden boy Hunter McKnight (the JFK of GA). But when her ex-boyfriend, Gabe, returns to town and her senator mother’s political nemesis is reelected, Ellie’s life starts to snowball out of control.

Shy, quiet Evan Hartnett is more into books than beer, and her closet is full of t-shirts and jeans instead of Jason Wu and Jimmy Choo. No one’s ever really noticed her—but she’s been noticing them. When her star rises as an intern at D.C.’s most-watched political news show, she soon finds the two worlds colliding in ways that make her question what’s secret and what’s fair game.

New girl Taryn Reyes is all laid-back, California cool; with a father who’s in line to be the first Hispanic president, she’s ready to dive into the D.C. scene with an open mind. But when her fellow students turn out to be more interested in spreading rumors than making friends, she realizes that forging a drama-free path might be a lot harder than she thinks.

With so many new friends and former flames in the mix, things are bound to get a little heated. And while diplomatic immunity might keep the cops away, there’s not much it can do about the press.

In a town where one teenage misstep can turn into a national scandal, the students at Georgetown Academy will have to be on their best behavior—or, at least, they’ll have to make the world believe that they are.

Because there’s only one rule: whatever you do, don’t get caught.
Tweet

Overall rating
5.0
Plot
5.0  (2)
Characters
5.0  (2)
Writing Style
5.0  (2)
Already have an account? Log in now or Create an account
Very Entertaining!
April 10, 2013 (Updated: April 10, 2013)
Overall rating
5.0
Plot
5.0
Characters
5.0
Writing Style
5.0
Georgetown Academy is an elite prep school for kids of the Washington political elite, and national political scandals can make or break the students' relationships. Politics even carries on to the parties: Democrats drink alcohol out of blue cups, Republicans, red. I thought it was very interesting to see how kids of politicians are more defined by their parents than by themselves, and how the politics of their parents consume them. It really makes you wonder if this is how private high schools in DC work. One of my favorite parts of the book is that it lets you choose your favorite characters to follow. I really enjoyed following the storylines of Evan and Ellie in particular. Evan is not a politco kid, but rather an aspiring journalist who uses information gleaned from her peers to help create news stories at the media company she works for. Ellie is the daughter of a Senator, and has the perfect boyfriend, but she has fallen in love with the son of her mother’s political nemesis. The book is very well written, full of pop culture and political references, and very fun and engaging to read.
Good Points
The characters are very real
The ability to choose which characters to follow at a certain point in the book

Jordan Knott 1 reviews
Report this review Comments (0) | Was this review helpful to you? 0 0
5 Stars for Georgetown Academy: Book One
April 01, 2013
Overall rating
5.0
Plot
5.0
Characters
5.0
Writing Style
5.0
This is an interactive ebook and the authors let readers decide which of the main characters to follow, so you get to read from various points of views. It is super cool!!
Good Points
5 STARS, hands down for Book One. I absolutely fell in LOVE this writing duo and have to say thanks to the authors, Jessica and Alyssa... because I am definitely HOOKED! Not since the original Beverly Hills 90201 have I been so intrigued by a group of High School kids. I enjoyed getting to know all of the different characters but as a California girl myself, I'd have to say that I can most relate Taryn and her laid back attitude. I'm looking forward to seeing how her character progresses as she spends more time with these elite prep school kids. I hope she doesn't change too much. Time to start reading #2.

Aimee Top 1000 Reviewer 2 reviews
Report this review Comments (0) | Was this review helpful to you? 0 0
Powered by JReviews
How to resolve AdBlock issue?
X