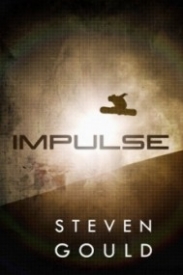 Cent has a secret. She lives in isolation, with her parents, hiding from the people who took her father captive and tortured him to gain control over his ability to teleport, and from the government agencies who want to use his talent. Cent has seen the world, but only from the safety of her parents’ arms. She’s teleported more than anyone on Earth, except for her mother and father, but she’s never been able to do it herself. Her life has never been in danger.

Until the day when she went snowboarding without permission and triggered an avalanche. When the snow and ice thundered down on her, she suddenly found herself in her own bedroom. That was the first time.
Tweet

Works Well as a Standalone
March 05, 2013
Overall rating
4.0
Plot
3.0
Characters
5.0
Writing Style
4.0
What I Loved:
Now I can certainly infer a lot about the plots of the previous two books from what I read in Impulse, but I was never had to sit through any long infodumps about the plots of the last two. Nor was I ever confused or out of place because I hadn't read the first two. Impulse functions well as a standalone, since the main character was not a part of the previous books (from what I can tell). You do not need to read the prior books to appreciate Impulse.

The main character of Impulse is the daughter of the original young adult hero from the first books. He's now grown into the over-protective father of a sassy, brilliant teenage daughter. Cent, short for Millicent, has lost patience with their isolated lifestyle. Now that she's sixteen, she wants to go to a real school, make friends, and enjoy a social life that consists of more than just her parents for the first time ever. Though fearful that his enemies will track them down, Davy agrees, because he loves Cent so much.

Seriously, I love how loving this family unit is. They're way closer than most because they're literally the only people they can completely trust, as evil types are trying to hunt down Davy and use his powers for evil. Millie, Davy and Cent argue, but there's never a time where it's not completely obvious that they all love one another. When it comes time for big decisions, they make them as a family, and Cent trusts them with details about her life that most kids don't share. Of course, Cent's a teen too, so she does keep some shenanigans under her hat, because sometimes what you're parents don't know can't hurt them, right?

Cent does occasionally embarrass herself in her first experiences with other teens, but, honestly, she's just a champ. She's ballsy, friendly, incredibly bright, sporty (she snowboards - how cool is that?), and pretty, so she was never going to have a horrid time of it. Despite that, she immediately attracts the attention of a bully, Caffeine, who becomes obsessed with taking Cent down after Cent embarrasses her by moving out of the way and letting Caffeine go down hard. I love how Cent takes everything in stride. She has this crazy confidence about so many things, because of her powers, experiences, and intelligence, but on the other hand being confused by boy drama can make her cry. Cent's such a fun heroine.

Also, the story focuses mostly on the bullying, which has a wider impact than Cent initially realized, rather than romance. However, the romance is actually super cute, even if it does get a bit instalovey at the end. Up to that point though, she and her boy have some great banter, AND he's a smart, sweet reader. Yes to that!

What Left Me Wanting More:
The one aspect that didn't really work for me was the more fantastical side. All of the jumping is fun, sure, but the endless practice sessions that Cent did got a little old. Plus, any time the third person limited perspective switched to Cent's mother (relief work in other countries) or father (researching the people looking for him), I felt my attention waning, though thankfully their chapters were really short. Still, I don't really think those chapters were needed, except as an incentive to fans of the first two books.

The Final Verdict:
Whether or not you've read Jumper and Reflex, Steven Gould's Impulse is an action-packed read with a kickbutt heroine. Impulse has humor, adventure, plotting, fighting and a little bit of romance. The series has appeal for male and female readers alike.