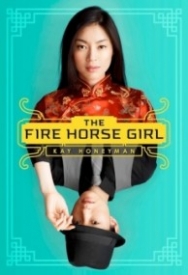 Jade Moon is a Fire Horse - the worst sign in the Chinese zodiac for girls, said to make them stubborn, willful, and far too imaginative. But while her family despairs of marrying her off, she has a passionate heart and powerful dreams, and wants only to find a way to make them come true.

Then a young man named Sterling Promise comes to their village to offer Jade Moon and her father a chance to go to America. While Sterling Promise's smooth manners couldn't be more different from her own impulsive nature, Jade Moon falls in love with him on the long voyage. But America in 1923 doesn't want to admit many Chinese, and when they are detained at Angel Island, the "Ellis Island of the West," she discovers a betrayal that destroys all her dreams. To get into America, much less survive there, Jade Moon will have to use all her stubbornness and will to break a new path . . . one as brave and dangerous as only a Fire Horse girl can imagine.
Tweet

“I could feel the beginning of the story gathering in her throat. Stories are that way, like storms. If you pay attention, you can sense them in the air.”

The tale is told entirely from the 3rd person perspective Jade Moon, a 17-year-old girl whose gender and birth year (according to the Chinese zodiac) leaves her shunned by her village and family—a pariah in a culture that openly considers her “cursed.” When a family business arrangement gives her the opportunity to go to America, Jade Moon is enchanted by the hope of a fresh start in a country where people seem free to make their own luck. But immigration proves difficult and dangerous. Jade Moon’s hopes run aground on the obstinate will of her both her father and Sterling Promise—the young man she’s grown to care for but cannot trust. And her only remaining option may be to defy everything she knows to carve out a place for herself in a world she doesn’t yet understand.

The Characters:
This reader connected with Jade Moon almost immediately. She is what Americans would generally deem a classic ‘Tomboy’—an innately willful, indelicate, opinionated, big-dreaming, and brash young woman. In short, a force of personality to be reckoned with. And of course, none of these traits were considered desirable of a female in Chinese culture at the time. But though she is hurt and isolated by her immediate world’s inability to accept her, her spirit isn’t completely crushed—and she grabs fiercely at hope for change the moment it comes near.

Jade Moon’s personality in an internal monologue nutshell:
"Auntie Wu took special pride in two of her accomplishments--the sons she bore and the flowers she grew. They were equally useless, but the flowers smelled better."

While some readers may not have as much sympathy for a more aggressive female character, I understood her so deeply it hurt. Jade Moon is every girl who has ever felt like they were too much for anyone to handle. She is every girl who knows they are too bold or temperamental, yet can’t seem to help it. She is every girl who would rather risk the consequences of breaking the socio-cultural mold than to allow the mold to break them.

Obviously, one needn’t be Chinese to be a Fire Horse kind of girl.

Then there’s Sterling Promise… whose name couldn’t be more fitting.
While his personality is nothing like Jade Moon’s, his hopes and goals are very much the same. He is an orphan, forced to grow up working in a sweatshop before being adopted by a man who’d estranged himself from his own family. Like Jade, he belongs nowhere and to no one. Like Jade, he sees America as his chance to start life anew. He’s a level-headed, silver-tongued survivalist—skilled at talking his way in and out of situations.

And while he comes to care for Jade, he remains an enigma for much of the story—a wild card. Both Jade and readers are never quite sure if will do the right thing in the end… or if he’ll go no further than doing what is right for himself.

The Plot:
The first sixty or so pages take place in a small village in Guangzhou, China—where readers are given a vivid look at the rural life of our heroine. Jade Moon’s oppressed state is palpable, but her story unfolds with no easy answers. For every constraint she attempts to shed by leaving China, she is confronted with a new obstacle or artifice in an unwelcoming America. All the while, readers are treated to a matter-of-fact look at events and policies that seem largely overlooked in most U.S. History textbooks: An in-depth look at the prison-like conditions on Angel Island, the 1906 earthquake in San Francisco and the subsequent fire that destroyed citizenship records, the concept of “paper children,” the infamous “Hatchet Men,” and non-graphic yet plain-faced look at prostitution in 1920’s Chinatown…

This book hit literary happiness buttons I didn’t even know I had.
I’m always excited about a strong female MC and cultural/historical insight that’s done well enough I don’t notice how much I’m learning… but I’d forgotten how much I appreciate co-experiencing the challenges of a female who is compelled to cross-dress (for survival, not fun), or a romance that initially doesn’t work because one or both parties realizes that, while the other does love them, they don’t love them enough.

Though there is a thread of hate-to-love romance, it takes a far backseat to the greater storyline. The ending is balanced and satisfying. While the book stands perfectly on its own, it also leaves open the possibility for more of Jade Moon’s story at some later date.

Thank you, Kay Honeyman, for such a remarkable work of heart. Books like this remind me why I love to read.

** A huge thanks to Scholastic for sending a review copy of this book,and to my cousin in NY for forwarding it to me.This review would not have been in existence if it weren't for you guys!**

-Recommended for children above the age of 12.

The premise of The Fire Horse Girl might have been beyond my usual comfort zone,but I still decided to take my chances when asking for a review copy since I absolutely love discovering new titles.And being a book blogger/reviewer,I get to do that A LOT.

The story of The Fire Horse Girl is basically based on the immigration of the Chinese to America around the 1920s and about how one Chinese girl's fiery and temperamental personality helped her survive there.Most men in America,especially the Chinese ones,were not at all respectful towards their female counterparts during that time do being a Chinese female and surviving in America took a lot of guts.And it seemed that our protagonist had just that;tons of it.

The Fire Horse Girl is one of those books that you will keep wanting to hold on to,with an unforgettable premise,admirable characters,and a well-paced storyline.While it went perfectly as a stand-alone,if it ever had a sequel I would gladly welcome it with open arms.The thing which felt most surreal to me was the fact that this was the author's debut.I know a lot of well published authors who still have yet to write a book as good as this one.Kay Honeyman definitely has a bright future ahead of her.Can't wait to see what else she's got in store!
Good Points
See review.

Nobonita Chowdhury Top 500 Reviewer 29 reviews
Report this review Comments (0) | Was this review helpful to you? 0 0
Powered by JReviews
How to resolve AdBlock issue?
X