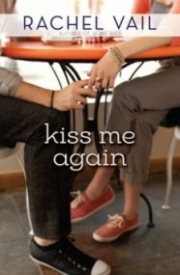 He closed the distance I'd opened up between us and kissed me lightly on the lips. "Maybe we can just be," Kevin whispered. Charlie Collins doesn't know what to do about Kevin Lazarus, her crush and, awkwardly, her new stepbrother. Things were complicated enough when their parents were only dating and when Kevin was going out with Charlie's best friend, Tess. Now, post-wedding, Charlie and Kevin are crossing paths and crossing lines, and then they have to eat breakfast . . . together. If only Charlie could get some time away from Kevin and her annoyingly happy and strange stepfamily, she might be able to deal. Yet first she has to make things right with George, her sort-of boyfriend, and Tess, whose trust she broke. But while Charlie struggles to be the perfect friend and daughter, at the end of the day Kevin is the one waiting for her at home. Would it really be so bad if they kissed again? The follow-up to If We Kiss, Rachel Vail's addictive story of first kisses and heartbreak, Kiss Me Again at long last answers the question of what happens when a crush so off-limits it has to be a fantasy suddenly becomes something very real.
Tweet

Focuses More on Family Than Romance
February 17, 2013 (Updated: February 18, 2013)
Overall rating
4.0
Plot
4.0
Characters
4.0
Writing Style
4.0
What I Loved:
As I began reading Kiss Me Again, I was initially highly concerned. I really liked the direction that Charlie was heading in at the end of If We Kiss. She had finally managed to make a step away from her unhealthy crush on boy-flirt Kevin Lazarus, which was really good timing, too, since her mom and his dad just got married. Then, I open the next book and there she is obsessing over kissing Kevin again. Vail does, though, quickly convince me that the story is actually going where it needs to go, and Kiss Me Again turns out to be a touching story more about family dynamics than romance.

Now that they're step-siblings, Charlie and Kevin have a serious conundrum, since they are teens who have kissed one another and would like to do that more. The romance, while perhaps the most obvious element of the story, does not dominate the other aspects by any means. Charlie and Kevin both grow a lot in their dealings with romantic relationships, Kevin learning to be more mindful and less of a flirt, while Charlie refuses to lead on a friend with a crush on her. Their surprisingly mature actions, especially in comparison with the events of If We Kiss really impressed me and made me much more sympathetic than I was previously.

Settling into a new family is difficult. The Lazarus family moves into the house Charlie and her mother have been in. Charlie has to share a bathroom for the first time in her life, and deal with the fact that the soap is now often wet from someone else (which is totally gross, I agree, girl). With her mom, Charlie didn't have many chores, but Joe Lazarus, her new step-father, believes in everyone doing their share. Joe is also much less lenient than her mother.

What's great, though, is that Vail highlights both the struggles and discomforts of these two families blending, and the wonderful parts. Most touching, I think is the affection shown by all towards Samantha, Kevin's younger sister. They all try to be there for her. Never is this better illustrated than when she loses one of her baby teeth. While she's sleeping, Charlie slips a dollar under her pillow. In the morning, Sam happily announces that the tooth fairy left her four dollars this time, and you realize that all four other family members left her a dollar for her tooth. Much as they may all have moments where they wish the marriage hadn't happened, ultimately, they are all making the best of it and taking good care of one another.

One of the trickiest things for Charlie to overcome in this change is that she has less time to spend with her mom. They're still trying to work out a nice balance of mother-daughter time when the book ends, but they are working on it. I mention this because Kiss Me Again has one of the best scenes (meaning incredibly awkward) where a parent tries to discuss sexuality with the child.

What Left Me Wanting (A Slight Bit) More:
Charlie also grows as a person on two more fronts. She gets a job, all through her own motivation and earns her first ever money. In a whole other realm of life, she learns a bit about friendship. Though her backstabbing of Tess in If We Kiss cannot be forgiven, that does not necessarily make Tess a good friend either. In Kiss Me Again, Charlie's starting to realize how imbalanced and unhealthy her relationship with Tess is. I do think that this lets Charlie off the hook a little bit too easily, perhaps an attempt to make her more sympathetic, but it's a good lesson for teens about friendship, and how insidiously terrible for your self-esteem a supposed best friend can be.

The Final Verdict:
Rachel Vail's follow-up to If We Kiss greatly improves on its predecessor. If you were on the fence about reading the second one, I would recommend it. Charlie's voice finds its stride here, and the focus on family makes this a rare, powerful young adult read.

Christina Franke, Staff Top 10 Reviewer 678 reviews
Report this review Comments (0) | Was this review helpful to you? 0 0
Kiss Me Again
January 07, 2013
Overall rating
3.0
Plot
3.0
Characters
3.0
Writing Style
3.0
Kiss Me Again is the follow-up to If We Kiss. I did not read that book but I found it easy to catch up and follow the established story line.

Charlie is in quite the predicament, her crush is now her stepbrother. They must find a new normal for their relationship and figure out what their relationship should be. I think almost everyone can say that at one point we may have liked the wrong guy but I don't know how many could say that the guy was our new stepbrother. I liked Charlie and Kevin and I thought they both were honest and real characters that had their ups and downs like everyone else.

I really enjoyed how the story wrapped up, I think it was the right way to end it. Overall, nothing about this story really stuck out to me. The characters were all likable and the story was written well and had a nice pace to it. I did enjoy it, and I think if you read the first book you should read this one. In fact, I may go back and read the first one just so I can see how the story began.