The Wig in the Window 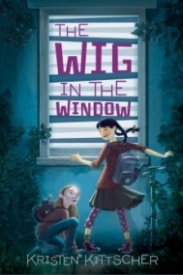 Sophie Young and Grace Yang have made a game of spying on their neighbors, but when they stake out the home of notoriously phony middle school counselor Dr. Charlotte Agford (aka Dr. Awkward), they stumble across a terrifying scene.

Or do they? The girls are convinced that Dr. Agford’s sugary sweet façade hides a dark secret. But as they get closer to the truth about Agford, the strain of the investigation pushes Sophie and Grace farther apart. Even if they crack their case, will their friendship survive?

Perfect for fans of The Mysterious Benedict Society, The Wig in the Window is a smart, funny middle-grade mystery with a Rear Window twist.
Tweet

Rear Window for Middle Grade Sleuths!
June 17, 2013 (Updated: June 17, 2013)
Overall rating
3.3
Plot
4.0
Characters
3.0
Writing Style
3.0
What I Liked:
Kristen Kittscher's debut caught my eye with that brilliantly adorable cover, one which perfectly captures the book itself, which makes it even better. Though mysteries aren't my genre of choice, I couldn't resist checking this one out, because of the Rear Window connection. Pop culture references are for the win always. The Wig in the Window is above all a story of friendship and courage, with plenty of humor and adventure to keep readers of all ages entertained.

The first thing I need to give Kittscher props for is how the mystery plays out. Reading mysteries intended for younger readers can be imminently frustrating for an adult, because the children often fail to note the most obvious of clues and the guilty party is clear from the first pages. This was not the case in The Wig in the Window. Kittscher adds evidence steadily, and keeps pulling the rug out from under Sophie's feet. Sophie does have a bit of a tendency to jump to conclusions, but she's never blindly oblivious to the facts in front of her.

In fact, Sophie and her friends don't do a lot of the inadvisable things kids in novels often do. When they think they've witnessed a murder by their next door neighbor, they contact the authorities. They try to rely on and trust adults with information, but receive contradictory information and end up having to do the best they can alone. In addition to snooping around, since they like to pretend they're in the FBI, they also do Google searches. Sophie and Grace approach the situation as logically as they can.

For me, the most meaningful aspect of The Wig in the Window is the friendship between amateur investigators Grace and Sophie. They've been friends since Sophie's family moved to the neighborhood, and go by Young (Sophie) and Yang (Grace). However, all is not perfect in their friendship, and the real mystery to solve brings all their issues to the surface. Sophie has always felt like the sidekick, following Grace's lead, which was fine until Sophie got in trouble for falsely reporting a murder and Grace didn't. Now Sophie feels abandoned, and has a chance to really come into her own, however painful that may be.

At school, Sophie's other friends ditch her in the wake of the reporting-the-school-counselor-for-murder scandal. In this awkward time, she's befriended by Trista, overweight and picked on (called Boom-Boom-Bottoms by the school's resident bully, who calls Sophie Ay-nus, a play off her French class name Agnes). Trista's totally my favorite character. She's sassy, can out-insult the bullies, loves herself for who she is, and has her friends' backs. Plus, she's a really healthy eater, so Kittscher's conveying that it's not necessarily lifestyle alone that leads to weight gain.

What Left Me Wanting More:
The one thing that left me really uncomfortable was the portrayal of Charlotte Agford, the school counselor that Grace and Sophie think they see commit murder. Whether or not she's the villain, some of the descriptions for her made me really uncomfortable. She has this giant hair, which turns out to be a wig, and huge fake breasts, both of which are repeatedly used as evidence essentially that she's evil, and I'm just not really cool with that. There were a couple of other characters described in unsettling ways, but Agford is the best example. Whether someone's a good or bad person shouldn't be bound up in their appearance.

The Final Verdict:
The Wig in the Window is a fun mystery, sure to delight middle grade readers. There's humor, action, friendship, and even a little bit of romance.

Christina Franke, Staff Top 10 Reviewer 677 reviews
Report this review Comments (1) | Was this review helpful to you? 0 0

One Real American: The Life of Ely S. Parker
4.5

Karen Yingling, Staff Reviewer
"Ely Parker was born in 1928, a time when many Tonawanda Senecas in New York state were adopting many European..."

Hope in the Mail: Reflections on Writing and Life
5.0
EJ Elisha Jachetti, Staff Reviewer
"HOPE IN THE MAIL is an autobiographical account of the author’s life as it relates to her writing. Wendelin Van..."