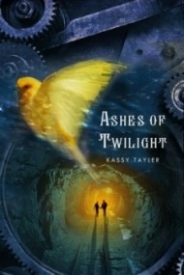 Wren MacAvoy works as a coal miner for a domed city that was constructed in the mid-nineteenth century to protect the royal blood line of England when astronomers spotted a comet on a collision course with Earth. Humanity would be saved by the most groundbreaking technology of the time. But after nearly 200 years of life beneath the dome, society has become complacent and the coal is running out. Plus there are those who wonder, is there life outside the dome or is the world still consumed by fire? When one of Wren's friends escapes the confines of the dome, he is burned alive and put on display as a warning to those seeking to disrupt the dome’s way of life. But Alex’s final words are haunting. “The sky is blue.” What happens next is a whirlwind of adventure, romance, conspiracy and the struggle to stay alive in a world where nothing is as it seems. Wren unwittingly becomes a catalyst for a revolution that destroys the dome and the only way to survive might be to embrace what the entire society has feared their entire existence.
Tweet

Better for Readers Less Familiar with Dystopian Tropes
December 26, 2012 (Updated: January 02, 2013)
Overall rating
3.3
Plot
3.0
Characters
3.0
Writing Style
4.0
What I Loved:
The best part of Ashes of Twilight is the writing. Tayler's style suited me well, with pretty sentences and just enough slang that I guessed the book was set in England. By the end of the book, I marked down several quotes I enjoyed. Tayler has a mature writing style, with no abuse of sentence fragments.

Wren MacAvoy wants more out of life. Born a shiner, she climbs out of the mines every day into the more dangerous reaches of her domed world to speculate on what's above. The rulers say that flames fill the world outside, making the dome a necessity, but she does not think she sees flames out there. Wren is a seeker, curious and unwilling to settle for anything, most especially a life she's been told to live and a boy she's been told to marry.

The characters that stole the show were the animals. I just love adorable animals with tons of personality in my fiction, and Tayler included bunches. Even better, none of them die, which there has been altogether to much of in my recent reads. Tayler kills people instead. Cat, a cleverly named cat, is my personal favorite. Pip, a canary, also warms my heart. So do the ponies with whom Wren works in the mines, who would not have survived without her aid. I love Wren and Pace for taking such good care of them, and I love Tayler for not putting animals in just to kill them off tragically.

What Left Me Wanting More:
While I did enjoy Ashes of Twilight, I really wish there had been more to it, something unique. None of the elements herein were unfamiliar to me: the dome, the class hierarchy punishing to those on the bottom-most rungs, the terrible air quality, the mining, the instalove, the abusive guy who wants to marry Wren, the twist regarding Wren's father, or the plot arc. All of this I have read in other dystopian novels, not all together like this, but I would still hope to see something solely of Tayler's creation. I have read a lot of dystopian novels, however, so this might not be an issue for readers without so much knowledge of the genre.

One element which should have been better handled is the inclusion of the biblical references. For whatever reason, the shiners only have one book, The Bible. As such, Wren references scripture a lot, as she does in the first sentence. I never really could see a point made with this. The references come thick and fast at the beginning of the novel, but drop off significantly towards the end, without seeming to impact the plot. These should either have served a plot purpose or be taken out entirely. They were not preachy particularly, just out of place.

Perhaps the worst element is the relationship between Wren and James. He sexually assaults her in an attempt to force him into marriage, and, though she does get mad about that and doesn't fall in love with him, she's too forgiving. Later in the book, she emphasizes multiple times what a great guy he is and that she thinks he'll make some other girl very happy. This reaction makes me VERY uncomfortable.

The Final Verdict:
Ashes of Twilight does have rather a slow pace, but, if you do not mind that, you might enjoy this book. Tayler's debut might work better for those without too much familiarity with the dystopian genre. I probably will try the next book in the series, with hopes of seeing Tayler really break the mold.